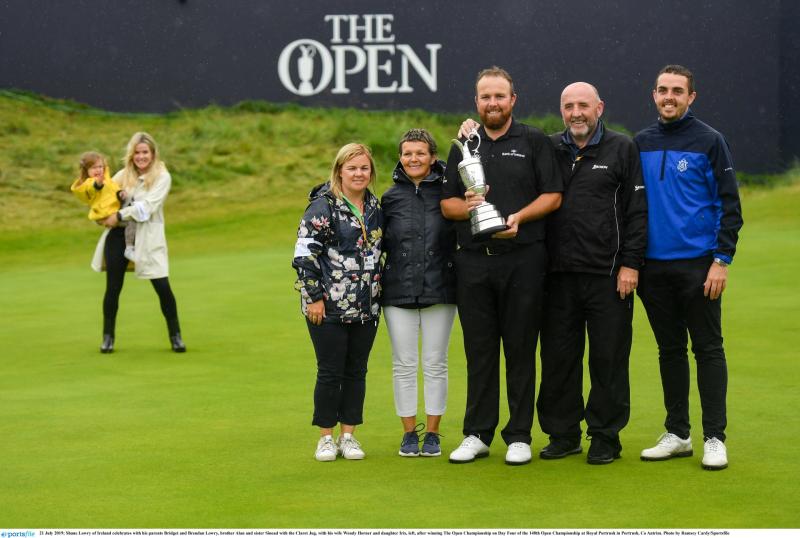 Alan Lowry, right, and the Lowry family after Shane won the British Open in 2019.

ANOTHER very nice twist in the Olympics for Offaly people will be the presence of Alan Lowry as caddy for his famous brother Shane in Tokyo.

Younger brother of Shane, Alan Lowry will carry the bag in place of regular caddy Bo Martin. It is not Alan's first time to caddy for Shane. After the Clara professional golfer split with his long time caddy, Dermot Byrne in 2018, Alan stepped into the breach, caddying for four tournaments before Martin was appointed. He had a big steadying influence on Shane at the time – the superstar was struggling for his best form and his decision to part company with Byrne really brought things to boiling point.

Alan Lowry is also an excellent amateur golfer. Like Shane, he developed his game at Esker Hills Golf Club and became an outstanding and very competitive amateur.

Now working as a senior consultant with Deloitte, Alan Lowry got a Paddy Harrington golf scholarship at Maynooth University, graduating with a higher diploma in professional accounting. Beofre that, he got an honours degree in mathematics and accounting.

His biggest golfing achievement came in 2015 when he won the prestious Mullingar Scratch Cup. This is one of the most highly sought golf scratch cup prizes in Ireland and some of the most famous golfers in the country have won it

Like Shane Lowry, he is also a devoted GAA, rugby and soccer follower and enjoys watching snooker as well. Shane Lowry won it in 2008 while other major winners from Ireland, Rory McIlroy (2006), Padraig Harrington (1994) and Darren Clarke (1989) also feature on the list of past winners.

At the recent Irish Open, Shane Lowry spoke about what it will mean to have his brother caddying for him in Tokyo.

“He's very excited. Alan's obviously caddied for me before so yeah, it’s pretty cool, a family affair. It will be nice to have him over there, nice for the two of us to go over there.

“I’d like to emphasise he's as good a caddie as you can get. So it's not like I'm not trying; I'm going over there to win a medal. Having Alan on the bag it would just be cool to do it with a family member and it will be nice for Bo to meet me in Memphis the week after and at least one of us won’t be wrecked!

“He did four tournaments with me in a row before Bo started and we did quite well together. We had like three Top 15s in a row over there and it was off the back of a really bad run. So it kind of got me going again, having him on the bag.

“It will be nice to do it, we're flying over together, I think we’re doing the Opening Ceremony together and just the experience will be nice.

“We just got all our gear during the week and he was pretty happy with that. Look, exciting times for us. It will be pretty cool for my parents sitting at home watching us, as well.”