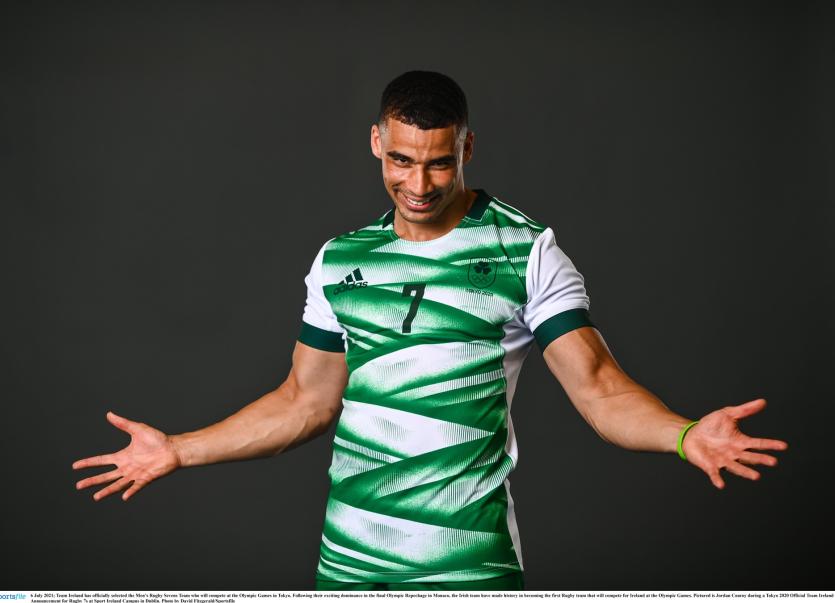 A MULTI talented sports man in his youth, Jordan Conroy has developed into one of the world's top rugby sevens players and competing with the Irish squad in the Tokyo Olympics will represent the pinnacle of his career to date.

The Tullamore man has captured the imagination with a series of blistering performances for the Irish rugby sevens squad in recent years.

Like most young people of his age, he dabbled in a variety of sports as he grew up in Tullamore. He was a very talented athlete and also excelled at soccer but it was rugby that he has achieved national stardom in.

Conroy began to really concentrate on rugby from eighteen years of age as he made the Tullamore Rugby Club firsts team. He played with Tullamore at adult level in Division 2C of the All-Ireland League in 2015-2016.

His talent and exceptional pace on the wing soon came to the talent of other rugby clubs and he joined Buccaneers in 2016-2017. They played in a higher grade than Tullamore, Division 1B of the All-Ireland League and his game really began to progress here. He scored eighteen tries as they won promotion to Division 1A, he was named as the Connacht club player of the year and the Division 1B player of the year. He also moved into representative rugby, playing for Connacht Eages in the British and Irish Cup.

He has continued to play his fifteen-a-side rugby with Buccaneers but it is in the sevens game that he has burst to national prominence. As the IRFU began to devote more resources to the emerging sevens game, Conroy was in the right place at the right time. He first played with the Irish sevens team in 2016 at the Amsterdam and Newcastle 7s. He played for Ireland in the Rugby Europe 2017 Sevens Grand Priz Series and the 2017 Moscow Sevens Tournament, where his performances really grabbed the attention.

He was Ireland's leading try scorer in the 2017 Lodz Sevens and starred as Ireland won the 2017 Clermont-Ferrand Sevens, scoring two tries in the final win over Russia. He was named player of the tournament at the Exeter Sevens as he scored six tries.

Conroy progressed further in 2018. In the Grand Prix series, he got eight tries in the Moscow Sevens and a further eight in the London Sevens, when he was selected on the tournament dream team.

Born in 1994, Conroy is now in his peak and he has scored some sensational tries. In 2020, he was named as the Gilbert Top Try Scorer and won his place on the Men's HSBC dream team for his outstanding performances during the season. Conroy had scored thirty tries in 28 games during a reduced 2020 World Series because of Covid-19 restrictions.

Conroy said at the time: "I'm really proud of the achievement as it was our first year on the World Series as a core team. For us a group to receive three awards, and in particular be recognised as a team, is testament to the work everyone has put in behind the scenes, from the players to all of the staff.

"To be named as the top try scorer and on the World Series Dream Team is an honour but again it is down to the hard work of everyone in the Ireland Sevens programme to enable us as players to go out and perform to the best of our ability.

"These awards only give us more hunger as players and as a group to better ourselves and improve on our performances from this season. A big goal for us as a team is to achieve Olympic qualification and that vision remains undiminished. We are working hard to put ourselves in the best position to have a good season in 2021."

Conroy has scored some sensational tries, with his speed and turn of feet leaving opponents for dead and some of these have become sensations on YouTube and other social media outlets.

He was also in outstanding form as Ireland secured qualification for the Olympics earlier this year. This is the first time that Ireland will field a rugby team in the Games, with the Rugby Sevens event making its debut in 2016 at Rio.

The events will take place at Tokyo Stadium, and will run from Monday, July 26 until Wednesday, July 28.

Ireland dominated the final Olympic repechage on June 19-20 in Monaco, when they overcame all teams en route to a sensational clash with pre-tournament favourites France.

With one Olympic spot up for grabs at the World Rugby Sevens Repechage, the men in green left no stone unturned, emerging as the winners.

The team will now compete in Pool C, facing South Africa, the USA and Kenya in matches which are fast moving and seven minutes per half and a two-minute break between the halves.

There are seven players on the field of play at all times, and throughout the game only five substitutions can be made.

The top two teams from the pool rounds move into the quarter final rounds, as well as the two best third-placed sides. These are followed by semi-finals and finals.

Anthony Eddy, the IRFU Director of Sevens Rugby, said: “We are delighted to be representing Ireland at the Tokyo Olympics. The squad has worked extremely hard for this opportunity.

“They will be determined to perform well and represent their country with distinction. Very few rugby players get the opportunity to play rugby for their country at the biggest sporting event in the world.

“This squad of players should be very proud of their achievement and they will be the first of many more to come.”

Conroy told Irish Rugby TV that his rugby career really started when he began to compete with Tullamore in Division 2 C of the All-Ireland League. “That is where I really developed. From Tullamore, I went onto Buccs then and tried to step up a level to see if I was able to improve myself. “