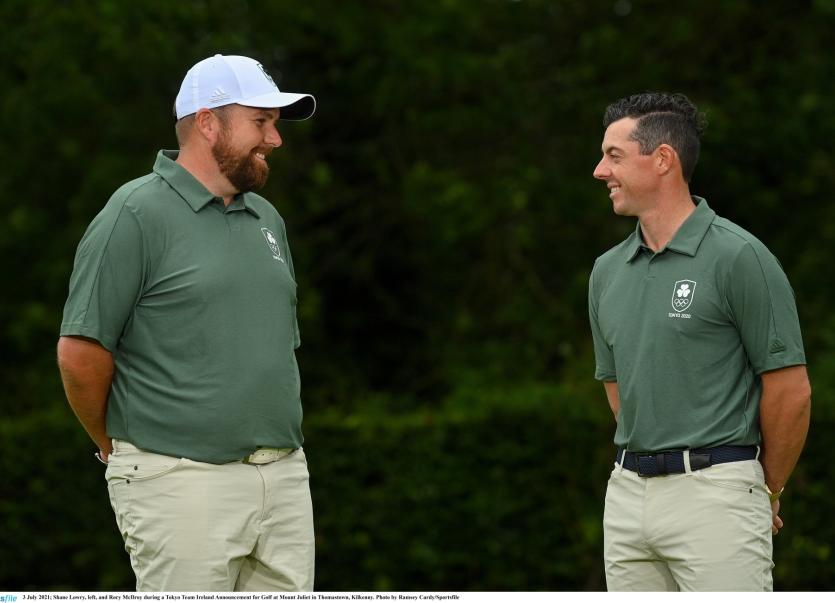 FOR most of the athletes heading to Tokyo, the Olympics represented the pinnacle of their career. The reward that they have strove and worked so hard for; exerted countless hours of commitment, sacrifice and focus. This is not the case for Shane Lowry.

The Olympics golf tournament will never rank in importance or profile alongside golf's biggest events. It is way down the pecking order behind the majors and several other of the most highly sought prizes on the schedule.

However, the affable, hugely popular Clara man will be absolutely thrilled to compete in the Olympics. Unlike many athletes, the Olympics did not feature in Shane Lowry's mind when he embarked on the road that led him to a phenomenally successful professional career. As a young teen spending every spare hour he could find at Esker Hills Golf Club, Shane Lowry would have went to bed dreaming about the US Masters and the British Open, not the Olympics.

Since turning professional, Shane Lowry has endeared himself to the Irish sporting public. He is one of the most popular Irish sporting heroes of all time, and that says a lot. He has won titles, earned riches that most people can't dream about but in all of that, he has never lost pride in his home town, county and country. In fact, these have been enhanced if anything.

He comes from Offaly sporting royalty. His father Brendan was an All-Ireland senior football championship medal winner with Offaly in 1982. A brilliant corner forward, he scored three super points in the All-Ireland final win over Kerry and gave huge service to Offaly and his club, Ferbane. His uncle Sean was an Offaly hero in 1972 and 1982 and is one of the small group of Offaly people with three All-Ireland medals – he was a sub in the first one in 1971. Another uncle Mick was corner back on the 1982 All-Ireland champions.

Others brothers of Brendan were also fine footballers and they are synonymous with Ferbane GAA Club. However, Brendan moved to Clara after marrying a proud Clara woman, Bridget Scanlon – a former employee with Telecom Eireann, they also had a successful shop in Clara back in the 1990s. While the Lowry family are famous in Offaly GAA circles, the Scanlon DNA has also formed a pivotal part in Shane Lowry's sporting pedigree, his make up and his personality. His uncles Colm and Mark were very good footballers for Clara and also played for Offaly, another uncle Joe was a good soccer player and long time official in Clara Town Soccer Club while the Scanlon's also have a tremendous musical heritage.

Shane Lowry is very proud of both sides of his family and the affection he shows for his grandmother, Emmy Scanlon is infectious.

As a youngster, Shane Lowry played most sports. He played football and hurling for Clara and was a decent underage corner forward with Clara, he played pitch and putt and others. However, his life changed after he discovered Esker Hills Golf Club in the years after it opened in 1996. Situated in Ballinamere, Esker Hills always attracted a big membership from Clara and as he entered his teens, Shane Lowry became a very familiar figure on the greens and fairways.

He developed into one of Ireland's top amateurs. He won the Irish Amateur Close Championshop in 2007 and was part of the Ireland team that won the European Amateur Team Championship in 2007 and 2008 – his fellow Irish Tokyo competitor Rory McIlroy was also on the 2007 team.

He had been hunting down qualification for the Great Britain and Ireland Walker Cup team in 2009 when his life changed on a never to be forgotten few days in Baltray, Louth. Invited to compete in the Irish Open as an amateur, he stunned the golf world with a sensational win, beating England's Robert Rock on the third hole of a play off.

Within days, his Walker Cup ambitions were put to bed as he made the decision to turn professional. It was fairytale stuff. His caddy for much of his amateur career was fellow Clara man, David Reynolds, a former Offaly and Clara footballer. Reynolds stayed on his bag for his early tournaments as professional before the decision was taken to employ a professional caddy.

Unsurprisingly, it took him time to settle into professional life. He missed the first three cuts but it soon became obvious that he was very comfortable at this level. By January 2010, he had edged into the top 100 at the world and he began to produce some excellent displays.

After this, his career has had a steady progression curve with important milestones along the way. One came in October 2012 when he had his first win as a professional, taking the Portugal Masters in Villamoura.

He now began to climb the world rankings and contend in more and more tournaments. In 2014, it was clear that he was moving into a different level. He finished second at the BMW PGA Championship in Wentworth and was ninth in the British Open at Royal Liverpool.

He had a huge breakthrough in 2014 when he won the WGC Bridgestone Invitational in Ohio. Ranked just behind the majors in terms of importance, this has a profound impact on his career as it gave him three year membership on the US PGA Tour and he accepted this for the 2015-2016 season.

His career really took off from here. While he was making a very lucrative living on the European Tour, America is where it is really at for professional golfers. It is where the best players compete on the best courses for the highest prize money and Lowry adapted quickly to life at this level.

He had another career defining moment in 2016 at the US Open in Oakmount, near Pittsburg. Lowry was four shots clear after the third round and priced to win his first major but it unravelled in the final rouse as he had a 76 and was overhauled by Dustin Johnson. He still finished tied second but it was a devastating loss for him. Ultimately, it defined him as a golfer and the manner in which he bounced back has earned him worldwide admiration.

He went through a rough couple of years after that US Open loss - “rough” may not be the right word but he was off the boil a bit, though he still competed very well. He was runner up at bthe DP World Tour Championship, the European Tour's season ending event, in 2017 and finished second at the Andalucia Valderrame Masters the same year.

His career was at a cross roads but fortunately he turned right for glory and it was resurrected with a great win at the 2019 Abu Dhabi HSBC Championship. He had started the 2018-2019 season with only partial status on the US Tour after finishing 140th on the Fed-Ex Cup list but his greatest day was just around the corner.

In 2019, he had his biggest win when taking the British Open in Royal Portrush. Lowry was magnificent as he controlled the tournament, leading by four shots at the end of round three and on this occasion, sprinting away from the field instead of coming back to it. He finished six shots ahead of Tommy Fleetwood and the scenes at his homecoming in Clara on the Tuesday were truly special. It wasn't the same as an All-Ireland winning homecoming but it was a very emootional occasion – it was the closest thing to that provided by a sports star from a code other than GAA.

Lowry is now in his prime. A master of all he surveys, married to Laois woman Wendy Honner, and the proud daddy of a daughter, he is one of Ireland's best loved sporting personalties. He is charming, articulate, personable and open and he is Offaly's most successful sports star ever.

He announced a major financial partnership with Offaly GAA earlier this year and this week, he had a big milestone when he moved into one of the automatic qualifying spots for the European Ryder Cup team.