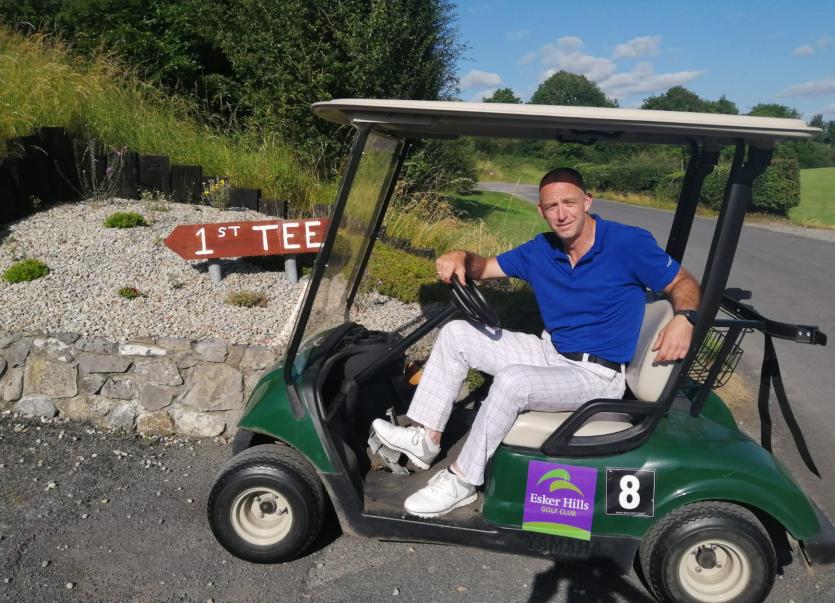 A FORMER Olympic swimmer has embraced country life in Tullamore after moving into the area two years ago.

Born in Galway and living in Dublin from four years of age, Nick O'Hare moved to Tinnycross, on the outskirts of Tullamore, two years ago and all the tea in China couldn't pay him to move back to the capital.

“I love Tullamore, you couldn't pay me to move back to Dublin,” he stressed last week. O'Hare travelled to Tokyo on Monday where he will be working for RTE as their swimming analyst and he will be staying in the Japanese capital for sixteen days.

He has adapted to all aspects of country life. He loves waking up in a rural area, seeing the trees and smelling the roses. He has joined Esker Hills Golf Club, where he is a very competitive golfer, playing off a low handicap of 5. “I love it here. The people are so friendly and welcoming. Country life suits me. I couldn't see myself moving back to Dublin. You couln't pay me to do it. It is beautiful here and there are so many amenities. Lough Boora with the dog, walks along the canal. There are fabulous restaurants.

“The Brewery Tap has the best food in Tullamore. Paul and Cathy Ann (Bell) give a great welcome all the time. There is so much here. There are lovely, lovely people. It is a much better way of living and the quality of life. I am a member of Esker Hills. Ray and Caroline are fabulous there. Esker Hills is like a family. There are no airs and graces. They take you as you are and are very welcoming.”

Prior to that, he lived in Castleknock in Dublin, where one of his best friends was former Dublin footballer Mick Galvin and he was a neighbour of current Dublin hero, Ciaran Kilkenny.

Nick O'Hare was a top class, international standard swimmer in the 1990s. He was a professional from 1995 to 2000 and represented Ireland eighty times. He won 43 All-Ireland titl;es, set 27 Irish records and the last of them was only broken last year. His speciality was the 50 metres freestyle and he swam at this in the 1996 Atlanta Olympics. “I didn't drown,” he joked, though his swimming was certainly of a higher calibre than that as he bowed out in the heats but ranked 27th out of the 98 competitors.

That Olympics was the pinnacle of his career and he retains great memories of it. “It was amazing, it is the biggest sports event in the world. I was swimming against the best athletes in the world.”

Atlanta will be a very different Olympic experience than Tokyo. Spectators thronged venues in the US city with 20,000 at the swimming events and a couple of million watching on television.

It was his first experience of that level of security. The USA was on high alert for the event and there were five different security check points on the way into venues. The opening ceremony was a particular highlight. They were brought by bus to the venue at 2.00pm for the 7.00pm start and teams were kept in the nearby baseball stadium before being called into the Olympic Stadium. There was a bridge between the two and he still recalls spending time on this on a steep angle, looking at the stars and then descending into the stadium where 120,000 people were gathered. The Irish team received the second biggest cheer of the night after the home one and US president, Bill Clinton, who had been in Ireland weeks earlier as the peace process kick-started, applauded them, giving the thumbs up. The sight of boxing legend Muhammed Ali performing the opening and US swimmer Janet Evans handing the torch to him has remained imprinted on his memory.

The sheer scale of the event took the breath away. The Irish team of 50-60 were housed in the Olympic Village, dining halls were open 24 hours a day and there was a powerful sense of camraderie. “It was amazing, a fabulous experience,” he smiled.

It also proved to be a very controversial Olympics for Ireland. There was great joy as Michelle Smith de Bruin captured three gold swimming medals and one bronze but then confusion and dismay as allegations flew around the place about doping. “It was a great experience. Everyone was sucked into it. She did phenomenally well and we were very proud to be Irish. People were stopping us outside the village because of Michelle. Then Janet Evans made comments (about doping) and controversy broke. The atmosphere changed and soured a bit. We didn't see her. She was off doing her own thing. It didn't detract from our own experience. Everyone wanted a bit of Irish gear. I swapped gear with athletes from Australia, China, Japan, Canada.”

The homecoming to Dublin with an open bus into the city centre and civic reception was also a special occasion.

Atlanta was the start in another phase of Nick O'Hare's life as it was his first time to do commentary with RTE. He was invited on to give comments during competitions after his own events were over. He continued to swim at a high level for the next four years but it was a traumatic time for Irish swimming. Shocking stories about sex abuse scandals in the Irish swimming world broke, funding was withdrawn, sponsors withdrew.

He was 28 when he bowed out of competitive swimming in 2000 and as the most experienced member on the elite squad, he became their de-facto spokesman when the sex abuse scandal broke. In particular, he fought against the withdrawal of funding, arguing that it was unfair to punish swimmers who had nothing to do with the events. He appeared Kenny Live, other television shows. He was interviewed by national papers and his public profile rose.

He had earmarked qualification for the 2000 Sydney Olympics as his final swimming career goal and was devastated when he just missed out on this, losing out by 700th of a second, a “blink of an eye”. Yet when one door shut, another opened. He ended up writing about the Olympics and swimming in general for Irish Times online. RTE began to avail of his expert analysis more and more.

He did co-commentary for the state broadcaster from 2004 onwards in Athlens. This will be his sixth Olympics to go to – one as a competitor and five as a commentator. He does the commentary with John Kenny, giving expert views on what is happening. It is a role he takes very seriously. He studies footage of many competitors, reads up on them and tries to personalise it. For Tokyo, he is bringing 300 pages of research on 200 swimmers, with details on their background, technique etc. He has learnt why some win and lose, often by the smallest of margins. He knows that famous American swimmer Michael Andrew will go out like a train and try and hold on. He has studied a 16 year old Romanian in the blue riband event, the 100m freestyle, who will start conservatively and then try and haul in the much faster startrers.

He will of course take particular interest in the Irish swimmers and how they perform. Ireland have 9 swimmers competing and a relay team has qualified for the first time. A 4 x 100m womens' relay team competed in the 1972 Munich Olympics but that was by invitation. This is the first time a team has qualified and he is looking forward to seeing how the 4 x 200m freestyle relay squad get on. “They have an outside shot of making the final. A good result would be the semi-final and the final will be great if they can make it.”

Nick O'Hare swam in ten major championships – Olympics, World and European Championships, World Student Ganmes. He won a bronze medal in the World Cup at Sheffield, only beaten by 300th of a second by a multiple Olympic medalist.

Tokyo will be a very new experience for him because of Covid-19 restrictions. He has had two Covid PCR tests before departure and the testing in Japan will be regimental. He will get a test every day for the first six days and then every second day. He will have to isolate in his hotel room for the first three days after arrival. They are strictly forbidden from mixing with the Japanene public and can basically only go from the hotel to the pool to the broadcast centre.

“Ordinarily we could go anywhere. I have stood beside Usain Bolt, I was ten yards from where Katie Taylor was fighting. I can't do any of that here. It is very restricted. We can't even go to a pub or restautant. We can only eat in the hotel or broadcast centre but it will still be an amazing experience.”

O'Hare knows that he will be in a very privileged position to be in Tokyo. Only 28 people from RTE are going and only two-three of these are non RTE employees. Ireland is sending its biggest ever Olympic team but the RTE staff is halved from its normal levels. Each day will be very full. He will leave the hotel at 7.30am most days and not get back until 10.00pm as the day is taken up with commentary, research, interviews etc.

His main employment is as a commercial consultant in pharmaceuticals and he is still involved in swimming – he is a member of the high performance review committee with Swim Ireland while he also helps out with the Pulse swim clinics in Offaly from time to time.