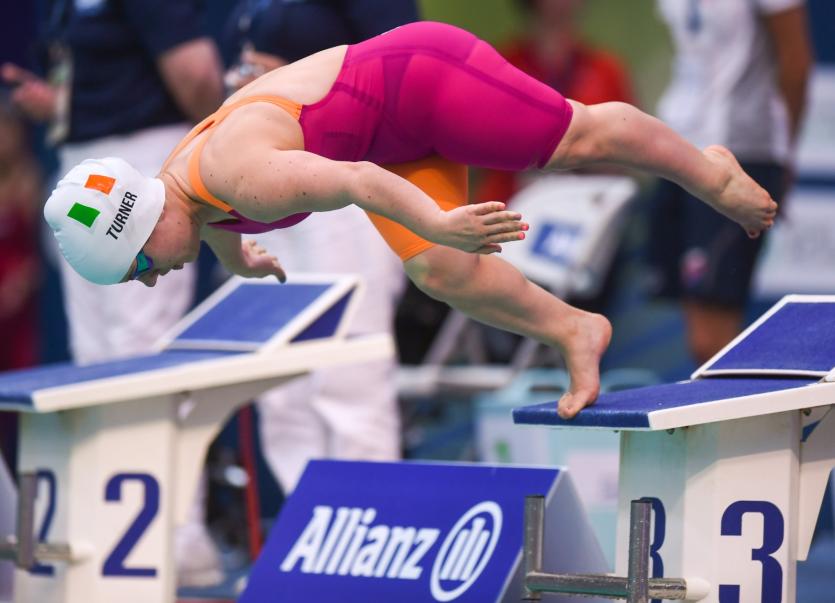 A REMARKABLE young woman, Nicole Turner will be competing in her second Paralympics when she travels to Tokyo after the middle of August.

Now just nineteen years of age, Turner has developed into an outstanding Paralympics swimmer and she competed in her the 2016 Paralympics in Rio De Janeiro five years ago. That event was all about learning for a very young Turner and she showed her rich promise as she competed in five events and made five finals. Her best placing was fifth in the 50 metres butterfly and she set personal bests in six out of her ten races.

From Garryhinch, Portarlington, on the Offaly side of the border, Nicole has made significant progress since then and she will compete in the 50 metre freestyle, 50 metre butterfly, 100 metres breaststroke and 200 metres individual medley in Tokyo. Having started in the Laois Marlins club, she now races for the NAC Swim Club which is based out of the High Performance National Aquatic Centre in Abbotstown, Dublin.

Her first major event was the World Dwarf Games in 2009 when she won four gold medals in swimming. This event was significant in that it identified the talent she had for swimming and she embarked on a very successful career. She benefitted from great coaching and almost daily sessions as she bid to fulfill her potential.

Since then, she has won a prolific haul of medals. Her first year to swim internationally was in 2015, when she was 13 in the world IPC swimming championships in Madeira.

She has an impressive collection of world and European medals. These include:

2016 European IPC swimming championships won 2 silver and 1 bronze. Silvers in the 200m IM and 100m Breaststroke and the Bronze in the 50m Butterfly.

She is currently ranked second in the world in the 50 metres butterfly and her aim in Tokyo is to get among the medals.

The following profile of Nicole is on the Paralympics Ireland website:

“One of the youngest squad members Nicole Turner has progressed onto the senior Paralympic swimming scene having started in her local club; Laois Marlins. She is now swimming for the NAC Swim Club alongside Ellen Keane.

Turner first saw international success early on in 2015 when she won a silver medal in the Youth Category at the British International in the 50m Butterfly – her first meet representing Ireland at a senior level.

“Nicole went on to compete in her first major senior international championships at the 2015 IPC Swimming World Championships in Glasgow, where she competed in six events in her S6 class, making the final of each and also setting a new lifetime best in every single one.

“She represented Ireland again at the 2016 IPC Swimming European Open Championships where she swam in six finals, bringing home silver in both the 200m Individual Medley and the 100m Breaststroke as well as a bronze in the 50m Butterfly. She also set nine new PB times.

“At her first Paralympic Games in 2016 Nicole impressively competed in five events qualifying for the final in every one. She succeeded in setting personal best times in six out of her ten races in Rio with her best placing; fifth in the 50m Butterfly. Nicole was the youngest member of Team Ireland in Rio and was chosen as flag bearer to lead the team into the closing ceremony.

“Nicole won silver at the 2018 World European Championships, hosted in Dublin. She finished second in the 50m butterfly with a time of 36.75. The success of Nicole continued the following year at the London edition, where she won bronze in the 50m Butterfly S6, a race that showed fight and determination from the Portarlington native.

“The following year at the 2019 World Para Swimming Allianz Championships in London, Nicole showed incredible fight to finish on the podium in the 50m Butterfly S6 with a third place finish. The teenage sensation powered from fifth to third place in the final ten metres to win a bronze medal, this also boosted her ranking which weighted towards securing Ireland a slot at the 2020 Paralympics Games.

“Following her brilliant performances in 2019, Nicole was nominated for both the RTÉ Sport Awards 2019 Sportsperson of the Year and was also named in the Young Sportspersons category.

“Nicole is of short stature; the rarer form known as Hypochondroplasia.”