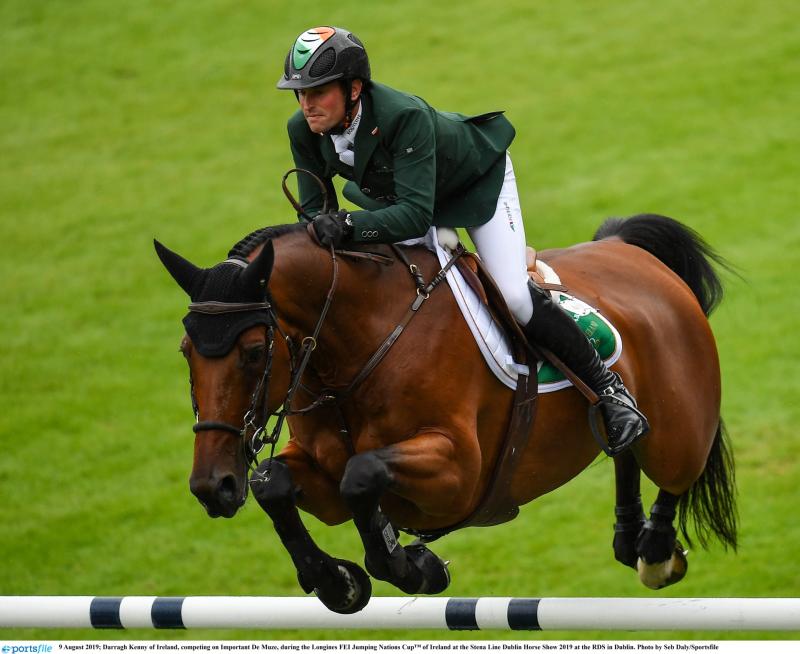 DARRAGH Kenny has been one of Ireland's top shpow jumpers for several years and he is the highest ranked of the Irish team going to Tokyo.

The Belmont man is now ranked eight in the world and he has been a multiple prize winner on the Irish, European and American circuits.

His career really took off after he won a training bursary to work at the North Run Stables in Warren, Vermont, USA in 2007. He benefitted here from top class coaching under Missy Clark and John Brennan and from riding some really top class horses.

His progress was immediate and significant and he was soon competing in the FEI World Cup finals while he represented Ireland at the highest international level.

This is the first time in fifteen years that the Irish show jumping team have qualified for the Olympics. The Irish team qualified with a brilliant victory in the €1.25 Million Longines FEI Nations Cup World Final in Barcelona.

The team of Peter Moloney, Paul O’Shea, Darragh Kenny and Cian O’Connor had just one time fault as they won to book their place in Tokyo, Kenny was on Ann Thompson's Balou du Reventon  and he had a clear round.

Kenny said afterwards: “I knew going in the ring that it was a very, very important round for us and I knew we had a great chance of getting the ticket done with that round so I was a bit nervous going in the ring but I am very lucky that I have an incredible horse, he is absolutely amazing. He tries so hard all the time. On Thursday he jumped amazing and today I was just trying to make sure that I left all the jumps up.”

While Belmont would be noted as very much GAA territory, Kenny's path always went in a different direction and horses were in his blood. His parents were both trainers and Kenny soon developed into a top class rider. This continued at North Run Farm.

The following profile of Kenny is on the Oaklands website:

“Over the next few years, Kenny continued his steady and impressive climb with top placings in prestigious grand prix classes up and down the East Coast. In September 2012, Kenny made the difficult decision to leave North Run Farm and form his own Oakland Ventures, LLC.

“Since its inception, Oakland Stables has become one of the most successful competition barns, offering high-performance sales horses and an elite training program with bases in Wellington, Florida and Meijel, Netherlands.

“Kenny represented Ireland in the 2014 Alltech FEI World Equestrian Games™ in Normandy, France, where he placed twelfth individually aboard his first championship mount, Imothep. From there, Kenny captured a monumental victory as a member of the Irish show jumping team, winning the Aga Khan Trophy and the 2015 Furusiyya FEI Nations Cup™ Jumping CSIO5* with Sans Soucis Z on home turf at the Dublin Horse Show.

In recent years, Kenny has continued to produce exceptional results internationally and on the Longines Global Champions Tour. He boasts an impressive resume of countless accolades with two prestigious 5* grand prix wins in the summer of 2019, which include the LGCT Grand Prix of Chantilly and the €500,000 Rolex Grand Prix in Knokke Hippique aboard Balou du Reventon.