IRELAND WEATHER FORECAST: 'Heatwave temperatures' likely across Europe and through Ireland next week 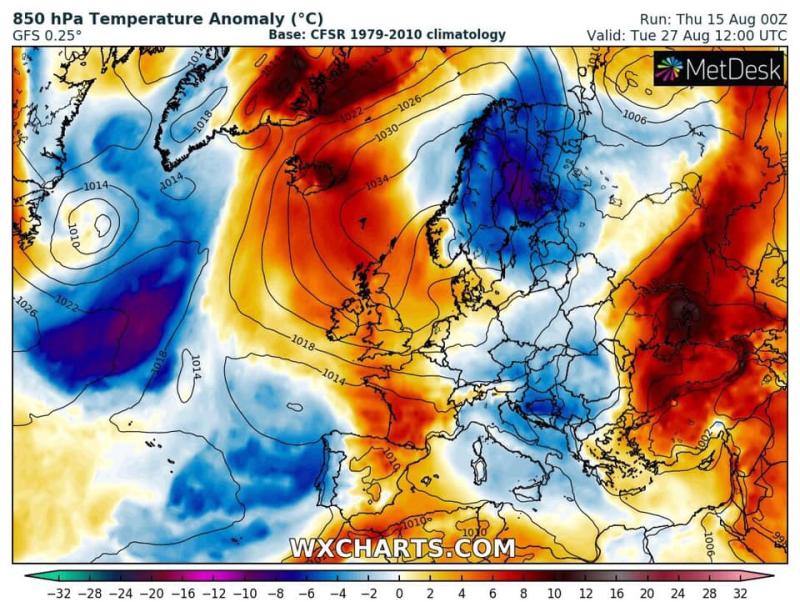 In a post on Facebook, Cathal Nolan from the Midlands Weather Channel believes that a large blocking anticyclone is likely to bring heatwave temperatures across much of western Europe, and through Ireland.

His post states: "The latest long term synoptic weather models continue to show a large blocking anticyclone developing to our southwest through the early days of next week, before pushing northeastwards and becoming fixed across southwestern Scandinavia, thereby diverting the jet stream much farther to the north.

"The development of such a pressure pattern, which will once again be defined by a weakening of the jet stream, is likely to bring heatwave temperatures across much of western Europe, and through Ireland, with our own temperatures set to push into the mid twenties through the second half of next week.

"Essentially the development of the blocking anticyclone will help to draw in some very warm plumes of air once more from the Iberian peninsula, known commonly as a Spanish Plums in meteorological terms. What is also worth noting is the development of a classic Omega High pattern which is characterised by two low pressure systems being separated by a large and stable area of high pressure.

"When such pressure patterns develop they tend to become long lasting features, essentially prolonging the type of weather conditions that are experienced by a given area. If you happen to find yourself under the influence of the high pressure then this can mean an extended warm and dry spell, whereas under the low pressure systems the opposite is likely, with a risk of excessive rain or cooler temperatures.

"In a year where Artic ice levels are already on a record breaking trajectory for ice loss the prospects of yet another heatwave seems almost certain to result in further severe melting of Arctic Sea ice, as well as further severe melting events in eastern Greenland. Indeed the very reason for such heatwaves may be linked to the weakening of the jet stream which is caused by increased melting of Arctic Ice and the uneven heating experienced in the sub polar regions.

"Summer is far from over it seems."