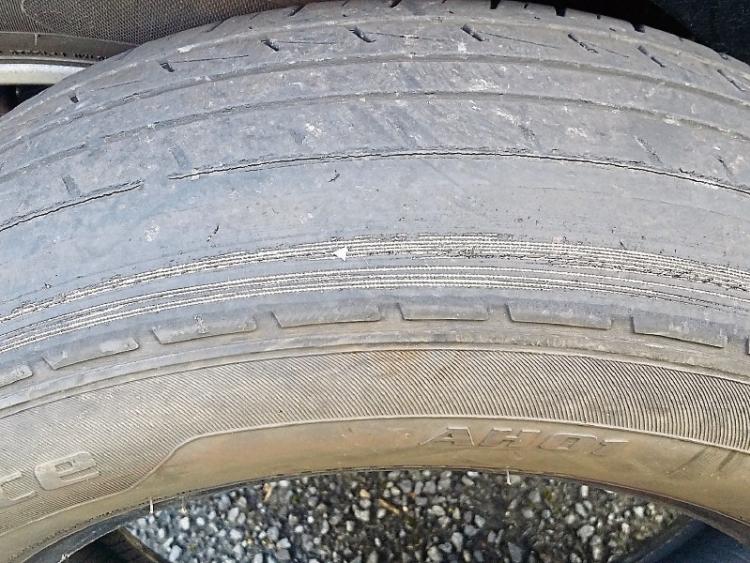 An analysis of the penalty point notices issued for tyre-related offences shows that there were just 853 detected infringements since the regulations came into force in May last year.

The number is just a fraction of the nearly 28,000 points issued for driving with a mobile phone. As a result a leading tyre supplier has hit out at the 'low level of enforcement'.

Continental Tyres Ireland say their evidence is that illegal and often dangerous tyres are illegal.

Tyre-related penalty point offences that were introduced last year are as follows:

- Tyre with a cut

The busiest month for the issue of tyre-related penalty point notices was last August, when 108 notices were issued. The lowest level of enforcement of the tyre safety regulations was in May, the first month of the new regulations, when just 46 were issued.

"However, with only a total of 853 notices issued for tyre offences in that year, we have to say that we are very disappointed with the extremely low level of enforcement in this regard. When you consider that a vehicle’s tyres are the only contact point with the road, their importance to overall road safety can not be overestimated," he said.

Mr. Dennigan pointed out that in 2016, some 27,755 notices were issued for mobile phone use while driving.

“We can all see that mobile phone use behind the wheel is very widespread and we rightly welcome the Garda’s focus on enforcement in this area, but equally, our own analysis of replacement tyres at tyre depots around the country has shown that vehicles running on dangerous or illegal tyres are extremely common.

"We would therefore have expected the number of tyre-related penalty point notices to be much higher than the recorded figure,” he said.

Last year, Continental Tyres Ireland carried out an analysis, over several weeks, of tyres replaced at a number of branches of nationwide tyre retailer and car maintenance provider, Advance Pitstop. The initiative was carried out as part of Continental Tyre Group’s commitment to its Vision Zero strategy.

The examination of tyres that were taken off vehicles that, minutes earlier, were driving on roads all around Ireland, showed that a high number of vehicles on our roads are driving on seriously dangerous or defective tyres.

The badly worn and damaged tyres uncovered in the analysis included the full range of faults that you would expect to find on tyres that have been neglected for some period of time, including:

- Tread depth worn down to below the legal minimum of 1.6mm and in some cases, worn right down so that the wire carcass of the tyre can be seen.

- Lumps, bulges, and holes in tyres again showing the wire carcass of the tyre;
uneven wear with one side of the tyre worn down to dangerous levels due to incorrect balancing and tyre tracking.”
“Even to the untrained eye, the faults on these tyres were immediately apparent but the only way we can tackle this problem is with more stringent enforcement of the new regulations. We fully support the Garda in their work aimed at keeping our roads safe and we understand the serious manpower challenges that the force faces in doing their day-to-day work. However, we are not calling for a whole new programme of roadside checks aimed at tyre safety. We would suggest that a vehicle’s tyres could be easily and quickly checked by a Garda when checking for perhaps, road tax / insurance or indeed, breathalyser tests for alcohol or other drugs. Our sole motivation is to ensure the worst examples of bad tyres that we uncovered are kept off our roads, that would be a huge boost to road safety across the country,” commented Dennigan.

‘We can’t put all of the onus on the Gardai, it is the responsibility of every motorist to ensure their vehicle is roadworthy and safe, and the condition of a vehicle’s tyres are hugely important in this regard. Motorists should carry out regular checks of their tyres, looking out for any damage, cuts or bulges. If any of the tyres are showing signs of damage, the motorist should waste no time in having them checked out by a competent tyre fitter.”

Tyre-related penalty point offences that were introduced last year are as follows:

Bald / not maintained / damaged tyre
Tyre with a cut
Tyre with tread depth less than 1.6mm
Tyre with lump / bulge / tear / partial failure
Unsuitable tyre
The busiest month for the issue of tyre-related penalty point notices was last August, when 108 notices were issued. The lowest level of enforcement of the tyre safety regulations was in May, the first month of the new regulations, when just 46 were issued.