Famous Offaly pub to be sold at auction

The current owner is retiring 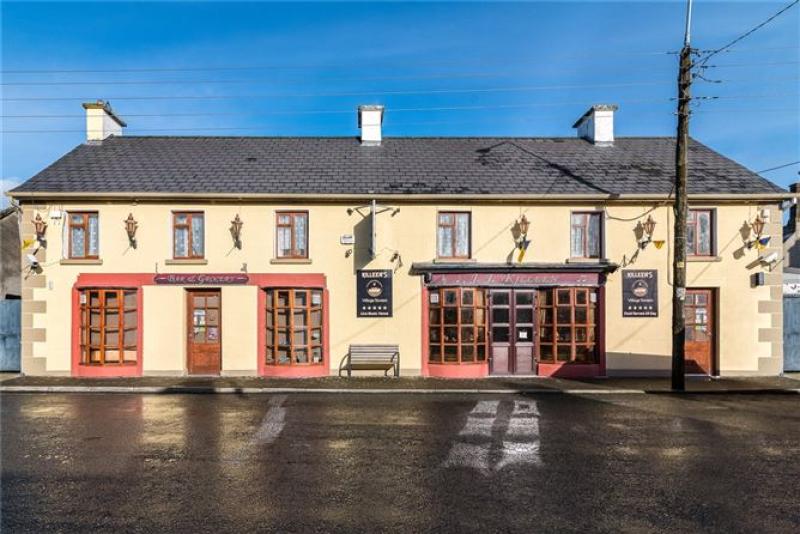 Famous Offaly pub to be sold at auction

The famous Killeen's Village Tavern, shop and residence at Shannonbridge, Offaly, is to be sold at auction. It is up for a guide price of €495,000.

Killeen's is a traditional Irish pub, shop, seven-bedroom residence and commercial kitchen. It is very well known with patrons frequenting if from far and wide on the banks of the Shannon.

It features music most nights in summer and serves appetising food including the famous Killeen's black puddin' sandwich. It is well-loved by locals and visitors alike with many Shannon cruisers having an overnight stop for local entertainment which often extends into a few nights.

Many notable names have called in for a pint or dropped in when passing by or on the Shannon. It has also featured in a number of films and TV series including the Flight of the Doves starring Dana & Nial Tobin, Three Men go to Ireland with Dara O'Briain, Rory McGrath & Griff Rhys Jones, John Creedon's Shannon, and Dick Warner's renowned Waterways series.

It was also frequented nightly by the crew in the making of “Noreen” a film made locally featuring Brendan & Domhnall Gleeson.

Measuring approximately 400sq.m on a 0.4-acre site this very popular licenced premises is situated in the middle of the village on a busy road over the River Shannon.

The current proprietor is the third generation of the Killeen family operating the pub and we are reliably informed that there has been a hostelry on this site since the late 17th century, Shannonbridge being a ford on the River Shannon even before the impressive Napoleonic fortifications were built to defend against a French invasion.

The business has traded very successfully over many decades with strong turnover figures available on request. The sale is taking place due to the owner's pending retirement.

Full details and viewing can be arranged by calling Ollie Moore at Sherry FitzGerald O'Meara in Athlone.