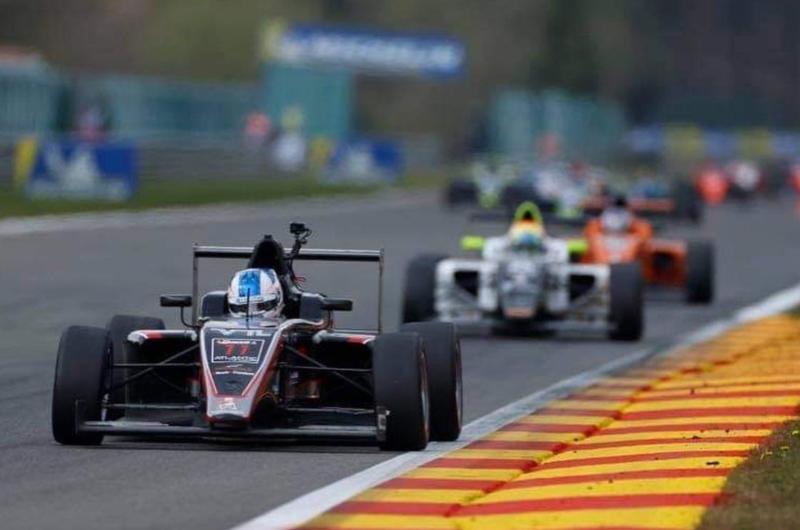 Offaly teenager Alex Dunne made a sensational start to his car racing career at the challenging Spa-Francorchamps circuit in Belgium at the weekend.

The fifteen-year-old from Clonbullogue stunned the Spanish F4 paddock with his speed, which put him on pole position for his first car race. The rising Irish star then followed up with a maiden podium as he battled against his much more experienced rivals to grab a debut third place.

Alex arrived at the Belgian Grand Prix track as one of the least experienced drivers in the field but quickly set about making his mark. Strong runs in practice were followed by a hugely impressive performance in Qualifying One, which would decide the grid for Race one. Having moved up the order steadily, the Irish teenager then put in two really strong laps to put his Pinnacle Motorsport Car on pole position.

In a weekend of firsts for the Irish driver, next up was a first attempt at a standing start. When the lights went out a good run to the first turn saw Alex sitting fourth but by the end of the lap he was back at the head of the field. A safety car was deployed following a number of incidents and Alex then had to contend with his first restart. On the restart, a number of his rivals used their experience to shuffle him down the pack but he battled back impressively to retake the final podium position on the last lap.

The Spanish F4 Championships’ complicated qualifying system meant seventh and twelfth place starts for Alex in the remaining two races, but the youngster was confident of making up places. In race two having climbed up to fifth his front wing became dislodged following slight contact with another car and he was forced to retire.

Race three was again interrupted by safety cars making progress from his twelfth place start difficult. Despite only running four green flag laps due to two long safety car periods, Alex once again impressed as he climbed to fifth place at the flag to finish off his impressive opening car racing weekend.

“I’m delighted to have completed my first ever Car Racing weekend with a pole position and a debut podium,” said Alex following race three.

“I’ve learned so much this weekend and with so much being new to me I am really happy with how everything went. This weekend sets us up very nicely for a championship challenge over the remainder of the season and I can’t wait for the next event to build on this performance. Thanks to all of my supporters; VTL, Maxus, Harris Group, KCMG, Reynolds Logistics, Artisan Marble, PDS Associates, Xpress Health, Motorsport Ireland and my team, Pinnacle Motorsport, for making this possible."

Alex Dunne will be back in action in the Spanish Formula 4 championship at Navarra, Spain, on May 29 and 30. To keep up with all of the latest news on Alex’s 2021 season see www.alexdunneracing.com.