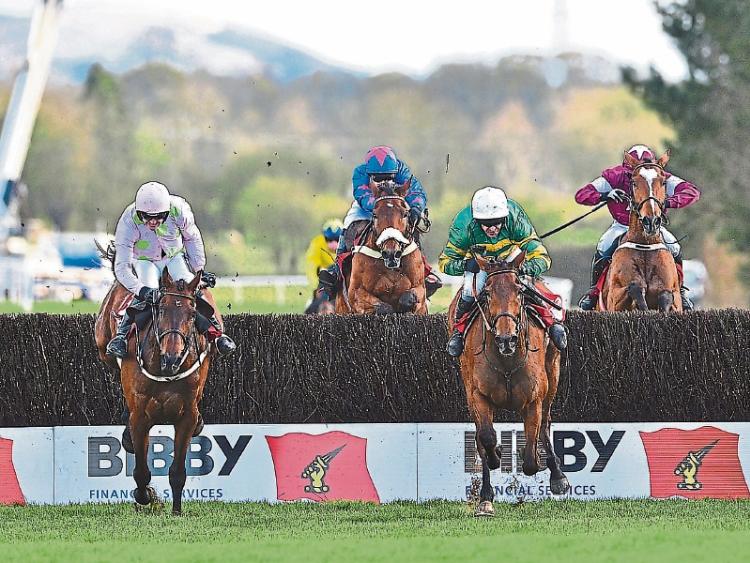 The 14:45 at Thurles on Saturday is a trappy enough hurdle affair involving the two biggest yards in the country. Both Willie Mullins and Gordon Elliott saddle runners, but Henry de Bromhead trains the favourite in this one. SADLER'S RISK (2/1) has some good form to his name but hasn't run over hurdles since last August when he was five lengths behind SNOW FALCON. Since then he has run well in two chase events at Punchestown and Down Royal, winning the Punchestown race by five lengths with the likes of LORD SCOUNDREL behind him. However, he doesn't seem to enjoy soft ground (Saturday's going), and hasn't been on the track since November. I have sided with Gordon Elliott's MIDNIGHT ESCAPE (3/1) over Willie Mullins' OPEN EAGLE (10/3). OPEN EAGLE hasn't run since the 2016 Cheltenham festival, and no matter how good the handler is, that is a huge negative. On the other hand, MIDNIGHT ESCAPE has been progressing nicely over hurdles and should enjoy the soft ground. He won a maiden very well at Naas last month, and before that ran credibly in defeat to AEGLOS and BRELADE. The latter was a fairly hot contest where MIDNIGHT ESCAPE finished third, splitting JOEY SASA (2nd) and BATTLEFORD (4th). With Davy Russell on-board, this five-year-old should progress again and could be worth siding with.

The 15:55 Novice Chase at Thurles contains some exciting chasing prospects, not least of which is the current favourite GREAT FIELD (Evens). The EVEN money about this one actually looks generous when you examine his form and prospects. He is unbeaten in two starts over fences since switching to the bigger obstacles, and the form in both is rock solid. He accounted for MALL DINI (ran well to be fifth in the Kim Muir at the Cheltenham festival) by eight lengths at Gowran Park on his chasing debut in January and followed that by slamming DON'T TOUCH IT in Leopardstown earlier this month. DIAMOND KING (2/1) is his main danger but he comes into this one having been pulled up in the Brown Advisory Handicap Chase at Cheltenham last week having blundered badly at the sixth fence. He'll have to bounce back quickly and that doesn't represent ideal preparation for a race with a very exciting chaser in the shape of GREAT FIELD in this one. FULL CRY (9/1) is the main danger and may be the forecast option considering his run at Cheltenham in October when he was second to HERON HEIGHTS and had subsequent Cheltenham festival winner TIGER ROLL behind him.

The Ulster National takes centre stage at Downpatrick on Sunday and it goes to post at 15:50. Last year's winner FEDERICI (16/1) takes the line again, but carries more weight this year, and comes into the race with largely indifferent form. FOLSOM BLUE (3/1) is the top weight but will receive plenty of support for Mouse Morris. However, the each-way vote here goes with TOPPER THORNTON (12/1) who ran well to be fourth in this last year carrying 10 stone 13 lbs. He carries six pound less than that this time around and comes into the contest on the back of a more than credible effort to be third, just 11 lengths in arrears to the vastly superior ROI DES FRANCS at Down Royal. That is strong form, and despite being predominantly inconsistent before that, a risk is taken that he might follow that up with a good effort here. LOVE RORY and BABY BACH could also run well for their connections.

This is the official start of the Irish flat season and the 15:10 is a good betting heat for a 6-furlong handicap. A lot of these will come here having been off for quite a few months, and so weighing up the form or likely order is tricky. However, I am advising an each-way punt on one who has seen action recently in the shape of TATLISU (9/1) for Richard Fahey, ridden by Paul Hanagan. Last year's winner BUBBLY BELLINI (20/1) is back to defend his crown with a seven pound claimer on-board, but he faces an uphill task with a couple of decent prospects in the field. SHARLIYNA, MIZAAH and GREAT MINDS could run well, while DINKUN DIAMOND is also interesting for new trainer Andrew Slattery.

The Irish Lincolnshire is the feature at Naas on Sunday and a big field will line up to take their chance. It will be the 16:40 on the card and a case can be made for a host of runners, not least of which SEA WOLF (7/1). He won a good race at the Curragh last August, but disappointed at Ascot in October. A break will have done him good and he goes well fresh, and should run Ger Lyons right into the frame here. SIKANDARABAD (4/1) is the favourite for the powerful Dermot Weld and Pat Smullen combination, but 4/1 about a horse that has been off the track since September is very short, but there is no doubt he holds a lot of class. The one I like each-way is RED AVENGER (16/1). He's won three out of his last six starts, and completed his build-up to this with a good second at Dundalk recently. He carries a nice low weight and should run a big race.