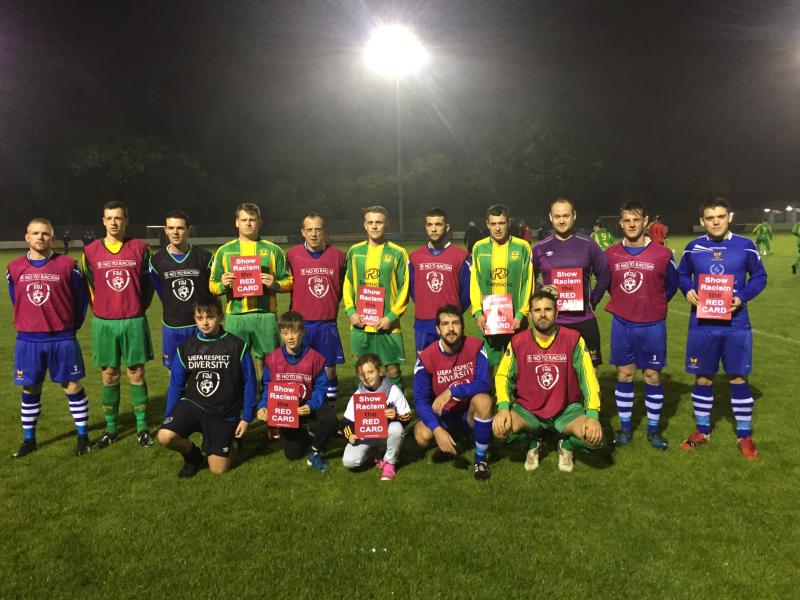 Tullamore and Dunboyne players unite in support of football against racism before their Division 1 game in Leah Victoria Park.

The weather conditions failed to dampen Tullamore’s enthusiasm in Leah Victoria Park last Wednesday as they battled both the elements and the opposition to record their biggest win in recent seasons and retain their second place position in the league table.

With an almost full squad at his disposal, manager Tony O’Sullivan was able to deploy his troops to maximum effect as they brought all their fire power to bear on an unsuspecting Dunboyne side.

The visitors were first to threaten when Paul O’Reilly picked out Gary Harper on the left and his searching cross just missed out the in-rushing Brian Martin. Tullamore’s response was immediate when, with only five minutes gone, Enda Carroll and Shane Dolan exchanged passes before Carroll drilled his shot low into the corner of the net. They nearly increased their lead when Dolan won back possession and played the ball across the area to Kevin Minnock but his effort was charged down. 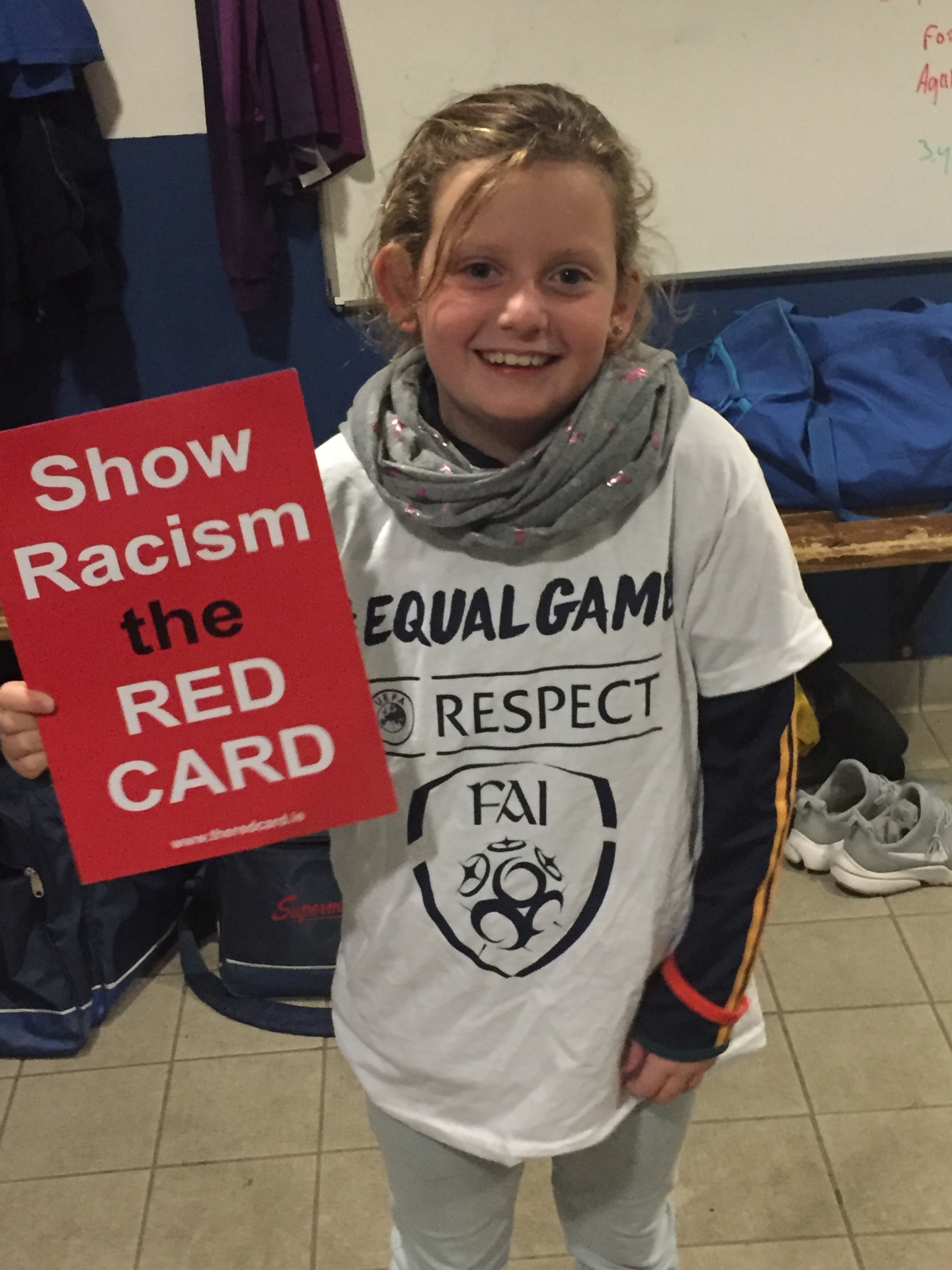 Kevin Williamson went on a great run through the middle but Gary McCrossan got back to cut out the danger and then Williamson, Minnock and Stephen Francis combined to create an opening for Shane Dolan, but his effort flew inches outside the left post. As Dunboyne hit back Stephen McCrossan got on the end of a long diagonal ball but Stuart Carroll did brilliantly to get back to block his shot on the line while, at the other end, Kevin Minnock broke clear on the left before firing the ball across the face of the goal.

Francis played a lovely ball through to Dolan but he was denied by a great last ditch tackle from Ross O’Toole but, with 28 minutes on the clock, they added to their advantage. Brian Gill played a superb ball down the right to Shane Dolan and his pin point cross was expertly despatched into the far corner by Stephen Francis.

It was all Tullamore now as Minnock and Francis combined to pick out Dolan but his 25 yard effort flew narrowly wide and he again went close when he got on the end of a great through ball from Gill but he was crowded out. Dunboyne went close when Brian Martin volleyed Brian McCrossan’s free kick over and then Paul O’Reilly cut in from the right but Alan O’Connell saved comfortably.

With minutes remaining in the first half Robert Bracken burst through the middle before laying the ball off to Kevin Minnock, but he was denied by a great point blank save from Cian Maher as the interval arrived with Tullamore two goals to the good.

On the restart Tullamore picked up where they had left off with Brian Norris playing a lovely ball through to Robert Bracken but the angle was too acute to trouble the Dunboyne keeper while, at the other end, Alan O’Connell did well to punch Brian Martin’s dangerous cross to safety.

With an hour gone the home side struck again when Brian Norris played a great ball through to Kevin Williamson on the left and his deep cross was fired home by Shane Dolan at the far post. Williamson was again in the thick of the action when he picked out Bracken and his clever lay off played in Dolan, but Cian Maher was quickly off his line to smother the shot. With 65 minutes gone Tullamore increased their lead in spectacular fashion when, following a corner, Brian Gill found the net with an overhead kick.

With Macdarragh O’Neill, Eoin George, Brendan Bracken and Mark Grennan coming on, the home side continued to pepper the visitors' defence as Gill went on a great run through the middle that carried him past four defenders before being chopped down but, inexplicably, he retaliated and was sent off. Dunboyne tried to bring their numerical advantage to bear as David Beattie cut in from the right but Alan O’Connell was equal to his effort.

Tullamore quickly dusted themselves down and struck again on 42 minutes when Kevin Williamson played a defence splitting pass through to Macdarragh O’Neill and he cooly swept the ball into the bottom right corner to put his side five goals in front. They nearly added to their tally when Stephen Francis picked out Mark Grennan on the left and his lovely curling shot just drifted outside the far post. As the game moved into injury time Cian Maher did well to keep out Brendan Bracken’s header and when the ball was knocked out to Kevin Williamson he returned it into the area for Stephen Francis to place a fine header past the keeper and into the net.

This was a performance that Tullamore have been building up to over the last number of weeks as they continue to go from strength to strength. They are only two points behind front runners Tolka Rovers with three games in hand and they have an opportunity to go top this weekend as they travel to Dublin on Friday to take on the league leaders. In what was an outstanding all round team performance the man of the match award was shared between Stephen Francis and Kevin Williamson.