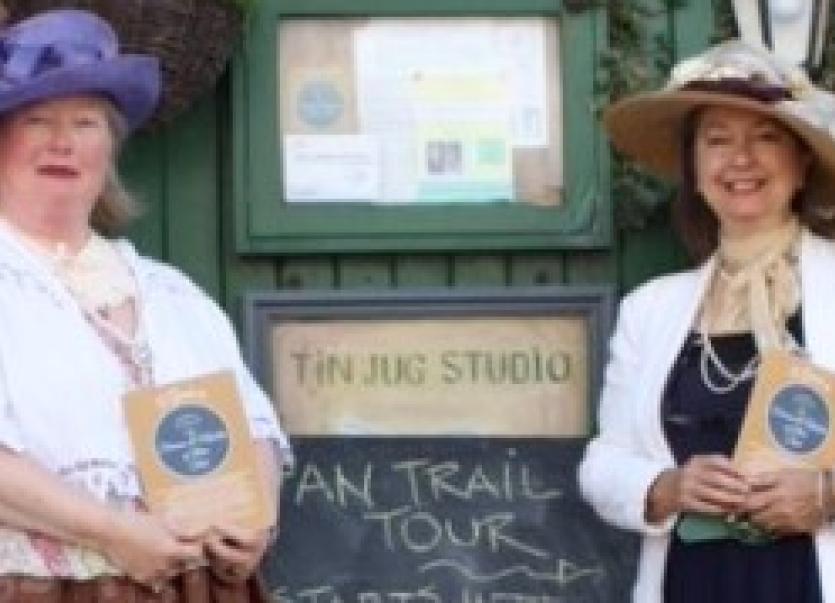 Jackie Lynch and Rosalind Fanning, the creators of the popular FAN trail in Birr.

From the very beginning of their collaboration on what eventually became the FAN Trail, artists Jackie Lynch and Rosalind Fanning, resolved their intention to keep the focus on attracting new visitors and tourists to the town itself.

They individually and together knew that it was important that Birr needed more than a single fine attraction to keep tourists here for longer, for the benefit of the myriad small businesses within and around town.

Not merely that tourists would make the one stop, immersing themselves solely in the demesne gardens and historic science centre and leaving. Nor indeed driving through and onwards to the West or East without stopping. But to linger and thus become enlightened about at least some of the exceptional and extraordinary people of the town's past - those who had made an impact and left an impressive legacy locally, nationally and internationally.

It all began back around 2011 after a presentation to Birr residents at Dooly's Hotel, by representatives of Westport Tidy Towns and the Town Planner. After the broadly informative meeting, signatures were sought for those who would like to be engaged on the various aspects of the local Tidy Towns, to include the practical and enhancing work and focussing on much more. Rosalind signed up for the Built Heritage and Environmental Committees (though with Dr. John Feehan and Fiona Devery in situ, her unqualified presence was clearly superfluous on the latter!)

There was an ever-diminishing attendance to the Built Heritage committee meetings. But at the one where four or five local businessmen and herself, under the Chair of the Chief Architect Rachel McKenna were seated, Rosalind brought up an idea which she had mooted many years before at a Birr Civic Trust meeting to no response; that of having what other cities around the World have: a series of circular plaques marking where notable people had dwelt - or events occurred. But this idea was in fact warmly received by the gentlemen and other woman, and the meeting closed with a resolve to begin some research.

Having had some very pleasant conversations with Jackie on many topics, Rosalind asked if she would be interested in joining her to work on the idea, and Jackie agreed. It must be clearly acknowledged that without Jackie Lynch - Birr 'born and bred', widely travelled and educated, a talented artist and photographer, and knowledgeable about local history - the trail would not be a fraction of what it is today.

Their friendship has bloomed and their artists-collaboration has been highly productive, developed in between their own work and jobs and family lives. At the heart of it, always for the benefit of Birr town. For no fees, no expenses claimed, no monetary gain, their years of efforts and work have been their gift to the townspeople. It was at last thanks to the outgoing councillors of Birr UDC who funded the bulk of the cost for the 25 - later 27 plaques, and thanks to the support and funding of the balance from The Birr Chapter of The Irish Georgian Society that it came to fruition.

The new trail for Birr was launched on the 29th June 2016 by renowned actor Des Keogh, who grew up in the town.
And for the new website, which has just been launched, it is with great thanks to the Heritage Officer, Amanda Pedlow who had sought funding for it (unbeknownst to Jackie and Rosalind until she had it 'in hand') and to Offaly Country Council for their strong support. The website has been excellently designed by Lisa of The Factory.

There is a lot more to the trail than simply about a selection of people. Firstly, it has been designed to draw visitors from place to place in a circuit, by map. The people of the past were selected to give a good gender balance, and importantly, to encompass as much of the aspects of the town's history as possible: from military to thespian; from literary to revolutionary...and much more. There is encouragement to spot architectural and street details and more. And to focus awareness on the exceptional, scholarly monastic legacy and origins of this place.

It is to be noted that there is an impressive library of Birr books to be viewed on the website too. For their 'Blog' on the new website, Jackie and Rosalind will be adding in seasonal entertaining and linking articles and pictures. With news of more notables, as discovered, recipes, points of further interest; historical revelations and opinions it will help to keep the site fresh and refreshed for those who may be considering a visit to Birr - or at the very least, a lingering trip on which they will sip, sup and purchase.

The Birr FAN Trail commemorates twenty-seven remarkable people and places from this heritage town’s fascinating history: all famous, or infamous, in their day.

The selection includes:
A Hollywood Icon; A Gaeilge-speaking-Argentinian-champion hurler; a romantic GP;
A history-loving Lawyer who should have stayed out of religion;
A successful businesswoman and TD who harboured a German spy;
A poetic cabinet-maker; a ‘Little Theatre’ that made a big impact; as well as a jazzy newspaper editor, a geologist who has a peak in Canada named after him, and a few veterans of a former empire’s battles.

There are sportspeople and diplomats; those with strong threads through the arts, and explorers, and people of the Church. Along the trail, we have also included locations linked with ‘dramatic events’. There is a murder, a schism, an out-done Dame and a handful of revolutionaries.

“All the world’s a stage,
And all the men and women merely players;
They have their exits and their entrances,
And one man in his time plays many parts...”

In comparison to towns of similar size, Birr has an astonishingly high number of remarkable people connected to it. In their time these men and women of Birr, who lived extraordinary lives, made an impact locally, nationally and internationally, yet their names have mostly faded from memory in our century. Through the Famous & Notables of Birr Trail, it is hoped that some of the people who were significant in their day, are in these days, honoured again.

In honour of the strong links many of them had to the Irish language, and a revival of enthusiasm for it here, their professions are shown on the plaques in Irish as well as English.

The full trail route is a surprising3.2 miles/5.1kilometers. It is up to the visitor how long it may take: perhaps around an hour on foot, or less on a bicycle! Along the way you will pass a good assortment of cafés, hostelries, restaurants, eateries and imbibing places. Stop awhile to rest, read, relax, partake and savour. May you enjoy the local flavours as you sip, sup and shop; and everywhere may you receive a fine welcome in Birr.

The new website's address is www.birrfantrail.ie

OPINION (AN COLÚN): A special weekend on a pilgrim path in Cork