OPINION (AN COLÚN): A special weekend on a pilgrim path in Cork 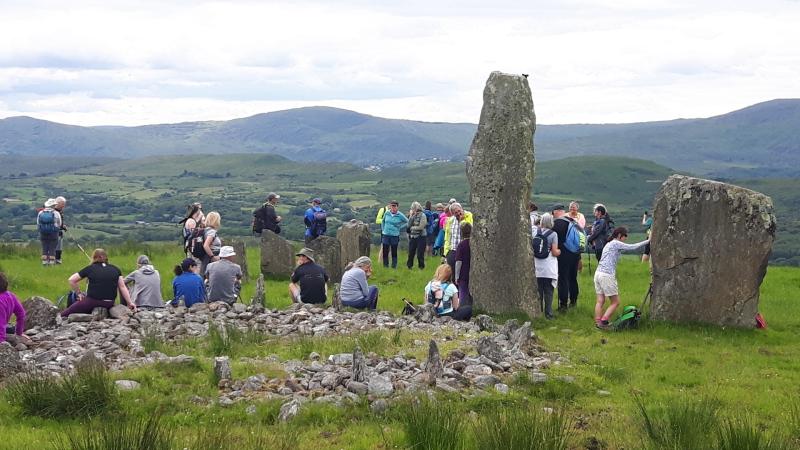 Some of my fellow pilgrims at Kealkill Stone Circle on Saturday afternoon.

On Saturday morning I got up at five. After a very busy week it was hard to get up and my eyes were tired and seemed glued together. But I give myself a prod and wearily emerged from the pleasant bed (sometimes I think this ability to give ourselves these minor prods of motivation can stand to us).

I had spent the previous two evenings preparing my camping stuff and the hillwalking gear, and the car was packed and ready.
I drove the three hours down to small Drimoleague in west Cork and a campsite called Top of the Rock where I met 60 fellow pilgrims. We set off on our 40 kilometre two day walk along St Finbarr's Pilgrim Path. The weather was divine. West Cork is very hilly and scenic, with magnificent views across the mountains and out to the Atlantic. On bad weather days it can be a grim and tough place to go for a walk up the hills in, with incredibly bleak and unforgiving moorland on the tops buffeted by high winds and swept by low visibility cloud. But on a clear day you really do feel you have died and gone to heaven. It is as close to paradise as we are going to get in this world.

St Finbarr's Pilgrim Path is well signposted throughout, which hopefully will give you confidence if you are reading this and thinking of walking it. I spend a lot of my time walking on my own, and sometimes walking with a group can be a pleasure and a welcome change; sometimes not. On this occasion the atmosphere was friendly and spiritual (in the best meanings possible of those two words). This was a great group of people and throughout the whole two days my thoughts on that didn't change.
David Ross runs Top of the Rock and has written a booklet about the pilgrim path.

After a couple of hours walking we were beside a ruined castle which dated to the 1500s and had been lived in by the O'Donovan clan. David told us a true story about this clan. They were inveterate enemies of the O'Sullivan clan but had gradually become weaker. The O'Sullivans stole some of the O'Donovans' cattle and a battle broke out during which the O'Donovans were badly beaten, including their chieftain.

The chieftain's wife had begged him not to fight because it was obvious he would lose, but possessing a tribal leader's pride he was propelled forward to his doom. As the victors were about to hang the chieftain from a tree he begged them to have mercy, telling them that he had promised his wife that his hand would be on the latch of his castle's door that evening. The Sullivans said they would grant his wish. They killed him, cut off his hand and nailed it to the castle's door.

David was the founding pastor of Bantry Christian Fellowship Church, therefore as well as being a purveyor of historical happenings he also offered us some spiritual reflections during the two days, as did the other guides.. A pilgrimage walk, he suggested, is an opportunity to reflect on your life. “We live in a fast changing world,” he said, “but there is something in the universe which is unchangeable, which is always there.”

Another of the guides (a landscape artist from Dublin), as we stood at 500 metres beside a gigantic rock in the midst of the heather-covered hillside, spoke about what the landscape is whispering quietly to our souls as we walk through it. “The landscape is telling our souls that we are only passing through and it will be here long after we are dead and gone.” We are all pilgrims in life, heading towards the one destination which is death. We all share that in common. However, some of us believe that death is not the end, that there is another place we go to after we die.

Another guide spoke of his marriage of 47 years and a chance encounter with an elderly woman in Southampton train station 47 years ago. This woman advised him to always remember to tell his wife that he loved her, at least once a day. He has heeded her advice ever since and each day he continues to tell his wife that he loves her, despite the ravages of time. Our bodies morph into less desirable shapes, our faces lose their youthful allurement, but love itself remains constant.

The landscape artist spoke about our secular world and the rejection of the framework of faith, but faith should not be confused with organised religion. It is in fact, in its true form, synonymous with mysticism. The guide said as well that our world badly needs to adopt more frequently the spirit of forgiveness. This struck me as very true. Forgiveness is often in short supply and its lack is the source of much grief. When we forgive we free ourselves from our prison of grief and anger. As we forgive, our heart is filled with love and we become free and happy.

There were many highlights during the two day pilgrimage. One of them was near the end of the trail when, after a long ascent, we reached the great vista of Gougane Barra with its calm lake surrounded by high hills and massive cliffs. A writer wrote that he stood gazing for a long time at this high and magnificent spot “gazing as though hypnotised at the sublime views, as previous pilgrims must, almost universally, have been moved to do.” Reluctantly leaving this viewing point we descended down to the lake and the famous building, St Finbarr's Oratory, located on an island in the lake. Here we gathered for one last time and for one last period of reflection. We sang the first verse of “Amazing Grace” and then reluctantly (because we wanted the magic to continue) began the drive back to our homes. In my pocket was my Pilgrim Passport with my first stamp.

posted a few pictures of the weekend on my Facebook page that night and I wrote at the top of them: “I found this pilgrimage the perfect antidote to life in the contemporary world. This was a non-judgemental, friendly and spiritual atmosphere, qualities which are painfully lacking in our society. The competitive spirit, which can often be an obnoxious thing, was also thankfully lacking. The soul didn't have to hide. It could unfurl itself, like a beautiful flower.”