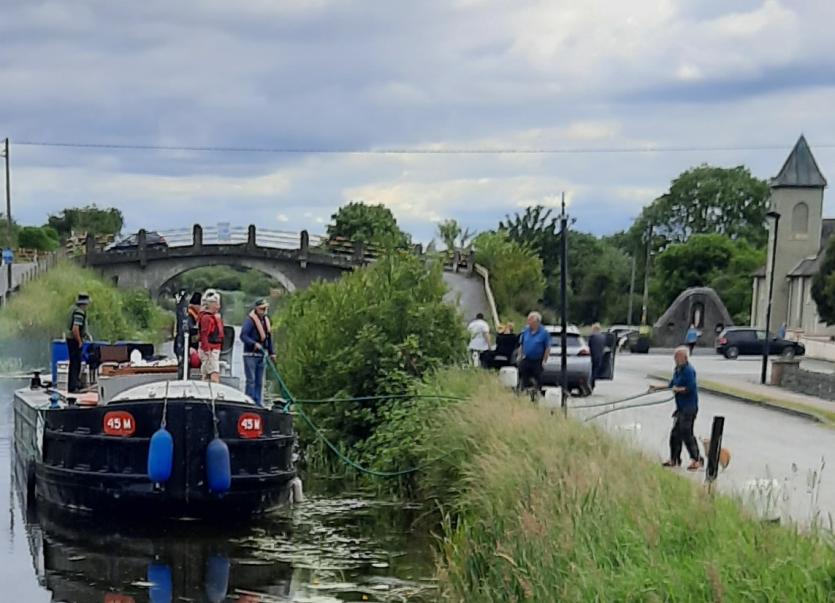 The 45M moors at Pullough on Saturday last

A RARE glimpse into the commercial heyday of the Grand Canal was afforded on Saturday afternoon last when the restored barge, 45M visited Pullough.

The heritage boat sank in Lough Derg in the 1940s and was painstakingly restored to its former grandeur by boating enthusiasts.

Tens of locals gathered on the canal side in Pullough to welcome the barge and her occupants who enjoyed refreshments outside the nearby Pull Inn.

Maeve Barry, who made the journey from Shannon Harbour to Pullough on the boat, said it was a “fantastic trip”.

She said at one farmhouse the barge passed by the owner said he was delighted to hear the sound of a Bolinder engine again.

Donal Boland said one of the objectives of the trip was to highlight the tourism potential of the Grand Canal and to entice more boats onto the stretch of the waterway between the Shannon and Tullamore.

“We are trying to tie in with local committees along that stretch,” said Mr Boland.

Also on board the 45M was Susie Coote whose father David was largely responsible for restoring the boat.

The 45M was built in 1928 by Vickers( Ireland) Limited and worked for only 17 years before she sank in Lough Derg in December 1946 with the loss of three of her crew.

She operated as a hack boat, sub-leased by Tom Moore of Carlow, for about two years during the "Emergency", as World War II was termed in Ireland, being used to carry sugar and general goods between Carlow and Dublin.

She was also used for the shipment of turf into the city. In November 1946 Christy "Copper" Cross was skipper with Jack Boland driving and Tony Brien as deckhand. They had left Dublin with a cargo of porter for Limerick. "Copper’s" father was seriously ill and on meeting 61M at Lowtown he swapped jobs with "Red" Ned Boland for the week so he would be close to home.

Two days later on Sunday morning December 1st, 45M travelled down the lake from Portumna heading for Killaloe. The lake was fairly rough so they pulled into Kilgarvan. After a couple of hours, they decided to chance going on to Killaloe so they headed off again. Two hours later they pulled into Garrykennedy for shelter.

In the late afternoon 45M lit the lamp (started the engine) and once again headed off down the lake. After a short while another barge, the St James followed her on, eventually taking the 45M under tow. Opposite Parkers Point 45M was struck by a gale that passed over the lake. The high winds caused the cargo to shift. The tow rope snapped as large waves swept across the deck and the barge heeled over and sank. When she went down "Red" Ned Bolan, Jack Boland and Jimmy McGrath all died. Tony Brien swam to safety and was the only survivor. Jack Boland’s body was recovered the next day on the shore, "Red "Ned’s body was found about three months later in Killaloe and Jimmy McGrath’s remains were never recovered. "Copper’s" father also died that fatal day. 45M lay at rest for the next 29 years at the bottom of Lough Derg.

In 1975 after buying it from CIE for £20 Donnacha Kennedy salvaged 45M from where she rested in 80ft of water. When she was brought up from the bottom the general condition of the hull was beyond their dreams as a thin crust of lime formed over everything and when that was knocked off the original paint showed underneath. The Bolinder was started without a full dismantling or overhaul.

In 1976, David Coote bought 34M from Martin Winston with a view to restoring her to original working state. As Donnacha intended converting a hull and David restoring one, they agreed to swap and in March 1976 45M was sold to David Coote. She was moored at Hazelhatch for many years during her restoration, with the Bolinder being restored in the garage at home. Boat and engine were reunited in 1980 and she had her first voyage with her restored engine that year.

In the mid 80’s she travelled back to Lough Derg to her current moorings near Killaloe. She has travelled between Lough Derg and the Grand Canal in the years since then.

45M has been made famous worldwide by the 1991 Waterways programme with Dick Warner.

More recently 45M has appeared in the BBC television series  Three Men go to Ireland in 2009.