OPINION (AN COLÚN): An expression of the inner world, in Portumna 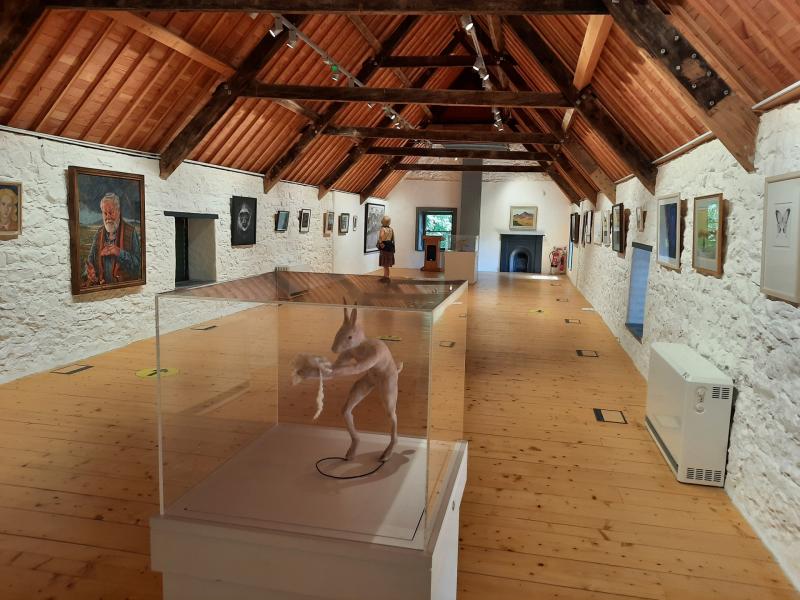 A fantastic art exhibition is showing in Portumna Castle. In the foreground is the sculpture "St Anthony's Rabbit".

It was a real pleasure to visit Portumna Castle on Sunday and view its elegance once more.
The OPW guides located on site were friendly and very helpful. In the sweltering heat they told us the history of this fine building, and pointed out its architectural details.
Their story was a tale of tension and conflict, as well as a tale of decency and a cultured philosophy about life.
The Anglo Norman family the De Burghs (Burkes) migrated to this area in the 12th Century. They were among the movers and shakers, knew the right people and had an inordinate lust for land, wealth and prestige.
The Burkes split into two families, the Burkes of Mayo and the Burkes of Galway. The Galway branch made the major decision of siding with Henry VIII, a decision which they profited immensely from.
Some of them were bad and miserable landlords, including the Miser Earl who was the living embodiment of Wilde's dictum of knowing the price of everything and the value of nothing.
The Castle was set ablaze in 1826. It is not known if the fire was an accident or deliberate. Our guide hinted she guessed it to be deliberate, which is certainly very possible given the stupidity and injustice of the landlord system. The last Lord Clanricarde (as the castle's owners were called) lived from 1832 to 1916, and imposed a heartless regime. As well as being known as the Miser Earl he was also called “Lord Clanrackrent”. He was an absentee landlord, living in London.
The fire rendered the house unliveable. Therefore construction of a new home began, on the location of the current car park in the middle of the Forest Park beside Portumna. Nothing exists of the home in the Forest Park, which was known as “the new castle”, as it was burned down in 1922. The burned out shell of the original castle was taken over by the Irish state in the 1940s and since then some improvement works have been done. Some weren't happy with the chimneys which were placed on the roof by the OPW. I like them, but I can see why some might object as they are very tall and over the top. Some beautiful stone masonry work is currently taking place on the outside windows, which is great to see.
The garden immediately in front of the house is a delight with its geometrically laidout roses and lavenders, echoing the style of gardens which would have been in vogue in the early 1600s when the castle was constructed.
While much has been done, I always feel a little frustrated when I visit Portumna Castle because with some significant additions it could be greatly improved. Admittedly these additions would be costly. They would include installing a staircase running up the three floors, as well as finishing the construction of each wooden floor and dividing each level into several rooms. It would also entail sourcing some suitable furniture and wall hangings to decorate the interior, transforming it into something more resembling an edifice in which one might have dwelt. I say “suitable furniture” because it would be better to do nothing than to decorate the place with garish and tasteless things.
As we left we paused for a while and looked at two bees' nests hidden in the castle's walls. The hum of a swarm of bees on a hot summer's day is one of nature's loveliest sounds, effusing a sense of contentment.
We also visited an art exhibition in one of the castle's outhouses. This exhibition is called “All Creatures Great and Small” and features some of the most imaginative and accomplished contemporary artists from Northern Ireland and the Republic.
This exhibition is free and I can't recommend it strongly enough. It's a celebration of the imaginary worlds of our minds, and of the simple, yet liberating, fact that our imaginary worlds are unbound. They are not bound by Group Think or the rules of fashion. They are without restrictions, expressing themselves in a way which must come from paradise. For example, some of the artworks in the exhibition are depictions of famous Grecian temples located in incongruous locations such as in parts of the Irish landscape. This is the way the eye of our imagination works, by cutting and pasting different eras and styles together and asking “Why not?” Society is constantly asking us to behave in many different ways, to adhere to many different modes of behaviour. Our imaginations, our souls, are in rebellion against this. They say, “Why cannot we try something different?”
One of the artworks is a painting of poet Michael Longley with a wren on his hand. I first came across Longley's fine poems when I was a young man in the late '80s. He is thankfully still with us. He has a deep respect and loving eye for nature, qualities which have produced many fine nature poems. How appropriate then that he should feature in an exhibition which is focussed on artworks which depict birds, animals, fish and insects and their interaction with humanity. “From ancient times,” the OPW brochure says, “drawings, paintings and sculptures of creatures have been created for symbolic and allegorical purposes.” What then does the wren symbolise on Longley's left hand? Wrens symbolise rebirth, immortality and protection, so maybe that is the artist's intention.
There's a sculpture in the exhibition called “St Anthony's Rabbit”. The sculpture is executed in a quirky, fantasy-world style which I love. St Anthony was a third century hermit who lived in the Egyptian desert and was tempted in various ways. In this particular part of the legend he is being tempted by a rabbit with gold. St Anthony knows that gold will bring him many good things in the world, including respect from others and luxurious goods, but he also knows its pitfalls and he overcomes the temptation. In our contemporary world, where many of us fetishise money, we, unfortunately for us, do not follow the saint's example.