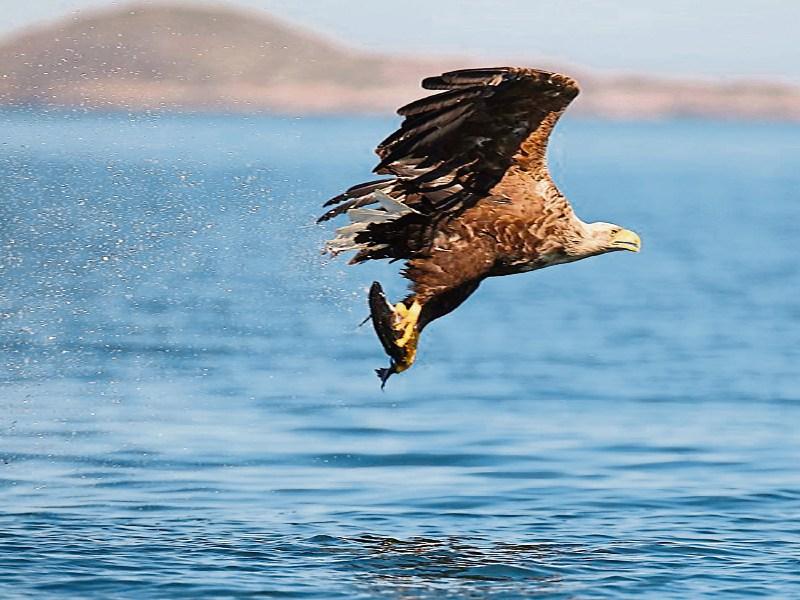 The white-tailed eagle is a success story but it is subject to human predation.

Nine of those ten birds survived their first year, and currently, they are dispersed at a number of locations in Ireland, and one is in Scotland.

Previously, 100 young White-tailed Eagles were released in Killarney National Park between 2007 and 2011.

Birds from these releases subsequently dispersed widely throughout Ireland with the first breeding in 2012 on Lough Derg, near Mountshannon Co. Clare, a great moment for the project.

Since their arrival in Lough Derg, thousands of people have travelled to the lake to view these magnificent creatures whose wingspan has been compared to “a barn door.”

Since the first successful breeding in 2012 a small breeding population of 8-10 pairs have successfully fledged over 30 chicks, with an additional five chicks likely to fledge in the wild in Munster in the next few weeks.

Indeed, this year, one nesting pair on Lough Derg produced three chicks, which are due to fledge shortly. This is uncommon, even in the very extensive wild populations in Norway.

Some Irish-bred eagles are now reaching maturity and are starting to breed in the wild themselves.

However, a scientific review of the reintroduction project indicated the small population is still vulnerable to mortality factors such as illegal poisoning.

The breeding population was also negatively impacted by Avian Influenza in 2018 and storm Hannah in 2019, and indeed, adverse weather this year when pairs were on the nest. Thus, this supplementary release of ten last year was required to bolster the existing population.

Young eagles have been collected under licence in June 2021 by the Norwegian Institute for Nature Research (NINA) and co-workers. Birds will be transported and held at the four release sites in Munster before release in early-mid August. Birds will be tagged, including with satellite tags, before release to allow the project to monitor their progress and their integration into the existing Irish breeding population.

An important aspect of any such releases is cooperation with the farming communities in the release areas and where birds settle to breed. During the first phase of the release project, managed by the NPWS and the Golden Eagle Trust, and during last year’s Phase II re-introduction, a good relationship was established in the release and breeding areas with the farming community, so much so that farmers helped monitor birds and nests at some sites.

The Phase II release hopes to build on this relationship into the future to ensure that farming and eagles continue to coexist to their mutual benefit.

Restoring this flagship species will bring additional biodiversity and ecosystem benefits as well as potential economic benefits. Thus, the re-establishment of breeding White-tailed Eagles at sites like Glengarriff in Cork and in Killarney has proven hugely popular with local residents while the potential for positive economic benefits from ecotourism was experienced in Mountshannon.