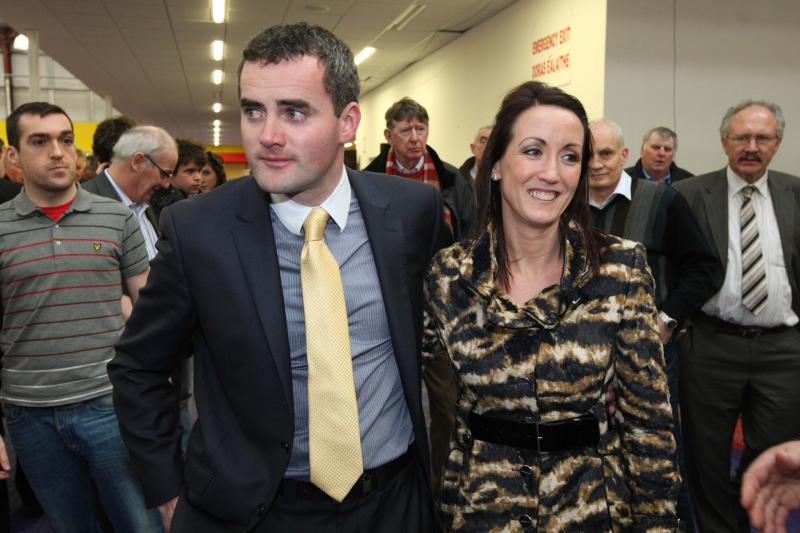 John Leahy and his wife Lavinia after John was eliminated on the 9th count at the General Election 2011. He was an Independent candidate

Cllr John Leahy has said he will hold off on ending his political career until the Covid restrictions ease, and he can say farewell in person in the County Council Chamber in Aras an Chontae, Tullamore.

Last November, Cllr Leahy publicly announced that he had decided to call time on his career in local politics.

The former leader of Renua pointed out that he had come to this decision because “given the current political landscape in the constituency of Laois/Offaly, I do not believe I will ever secure a Dail seat”.

The Kilcormac native unsuccessfully contested three general elections between 2011 and 2020.

Well known as a local councillor, it was surprising to many that he never became a TD. He was close in terms of the amount of votes he won in the General Elections but could never make the breakthrough.

He thinks it's because of some of the positions he took on certain issues, positions which were sometimes neither populist nor fashionable. For example, he took an anti-abortion stance which, he feels, might have cost him some votes.

He takes pride in the fact he made known his positions on certain issues even if they weren't popular. “If you ask people what do I stand for, what are my policies, they will be able to tell you. By contrast, with many politicians, you wouldn't know what they actually believed in because they are afraid of going against the general grain and losing votes. I, by contrast, believe in being honest.”

He said he tried very hard to get into Dáil Eireann where he could make substantial policy changes “but for whatever reason or reasons my constituents just didn't feel sufficiently confident in me.”

In November he signalled his intention to retire from local politics by June 2021 at the latest, and that he was preparing to co-opt another man from Kilcormac parish to his vacant seat on Offaly County Council.

However, he has postponed this because the County Council meetings are still being held on zoom. “When I end my local politics career and hand over my seat it should be done in front of the other Councillors and Council Executive in Aras an Chontae,” he remarked.

“It should not be done on zoom, which would be inappropriate. All going well with this period emerging from Covid we should be back in the Chamber by September, and it is then that I will end my career.”

The Councillor said he had spent €100,000 of his own money on running the General Election campaigns. He pointed out that County Councillors earn far less than people suppose. Being a Councillor is a very demanding job where you are at the coalface of the problems facing people with very poor remuneration. Councillors earn a salary of €17,500 per year. This is a gross figure which means that the money actually going into their pocket is even less.

Cllr Leahy paid tribute to his wife Lavinia for sticking by him through thick and thin throughout his time in politics. “Lavinia has been very supportive through it all. Politics can be stressful and it was important to me to have her support.”

He has just successfully completed exams in auctioneering and plans to branch out into a career in real estate after his political career.

Cllr Leahy was first elected as a local councillor for Offaly County Council in 2009, as an Independent. He was re-elected, topping the poll, in 2014. He joined Renua at its foundation in 2015. In the 2016 General Election he was eliminated on the fifth count with 6,588 votes.

He was elected leader of Renua on September 3, 2016, succeeding Lucinda Creighton. Before joining Renua he also worked as a GAA Coaching and Games Promotion Officer and contributed as a hurling analyst on Midlands 103.

In an interview with “Hot Press” he commented that he agreed with the legalisation of prostitution and he believed that “all religions are equal.”

Aged 18 to 34? Here's how to register for a Covid-19 vaccine in your local pharmacy?