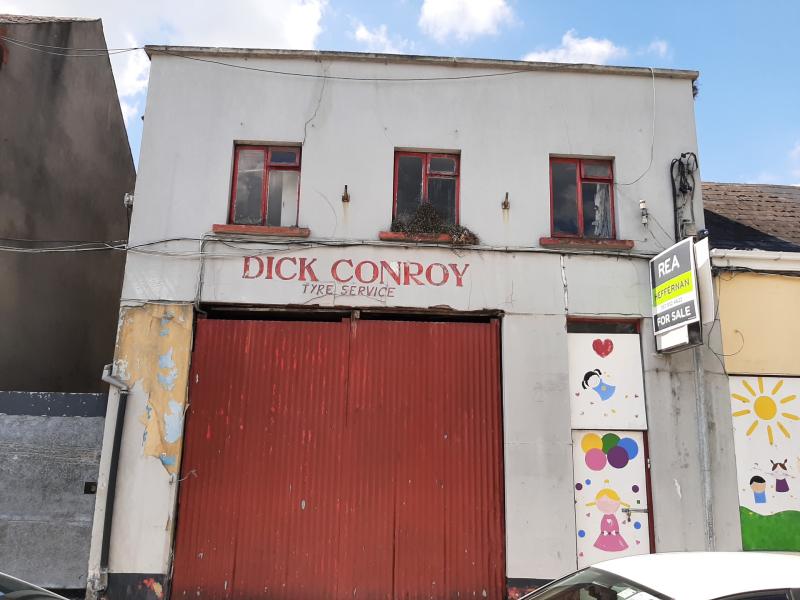 When a business wanted to expand it would first try to do so on its own premises. If it was on a main street and there was space at the front, then the simplest answer was to build out to the back of the path without breaking the building line. In Tullamore at that time, there was no adopted town plan or preservation legislation, so you could effectively do what you liked, as long as you didn’t create a fire hazard.

That is what Dermot Kilroy did when he built a new shop front across what had been the Charleville Estate Office on High Street and what Dick Conroy did when he converted his house on Colmcille Street to a garage and extended it out to the road. In the straitened circumstances of the time, both structures were utilitarian and unsophisticated and added little to the architectural quality of the town.

As a young and enthusiastic architectural student, I protested fruitlessly against the building of the Kilroy shop front which I felt would compromise the facade of a fine building which today is attributed to the great architect Richard Castle, the designer of Leinster House. But the Tribune wouldn’t print my anguished and probably intemperate letters and the Council didn’t want to know.

Almost sixty five years later, I am gobsmacked to discover that the compilers of the National Inventory of Architectural Heritage now rate these two mundane extensions as part of the glories of the architectural heritage of Tullamore and deserving of the same level of statutory protection as the Market House in O’Connor Square.

Dick Conroy’s Garage, they believe, ‘provides a view that is fast disappearing throughout Ireland. Small scale urban garages and mechanics are now under threat from generic multi-national forecourts’, while the Mr Price shop front ‘is appealing with its arcaded timber pilasters and recessed round-headed doorway with double wrought iron security gates’.

These NIAH recommendations owe more to a misplaced nostalgia for times past than an objective architectural critique. Just like myself, something isn’t necessarily any good simply because it is old.

The planners in Offaly County Council accepted and promoted the NIAH evaluations, but following objections, they have now decided to review the Mr Price designation, while the Councillors forcefully and correctly rejected the listing of Dick Conroy’s garage, describing it as ‘a derelict eyesore’.

The planners were sensible enough not to go along with the NIAH’s other surprising recommendation that the very derelict building in Church Street whose removal is essential to provide the long promised link between the Square and Church Street, be preserved as a Structure of Regional Importance also.

Placing an individual building on the list of Protected Structures creates a stringent obligation to conserve every single element, internal as well as external. No changes whatsoever can be made without obtaining consent and the burden of maintenance falls on the unfortunate owner. Grants are meagre and access to them costly and frustrating. Those with an interest in historic or beautiful buildings will willingly take on the work and costs of restoration, but for many it may be beyond their means or abilities. The preservation of a building should only be proposed therefore as an integral element of an overall plan.

Under its ‘Town Centres First’ programme, the Government will provide significant funds for urban regeneration. While the 1979 Tullamore Town Plan listed only five buildings for preservation there are today two hundred and six Protected Structures, of which  three quarters are located in the historic centre of the town. Some are sadly semi-derelict, and many might provide new uses, particularly as dwellings, but their listed status along with other bye- law restrictions does not encourage flexibility. This dilemma requires resolution.

Fergal MacCabe is an architect and town planner