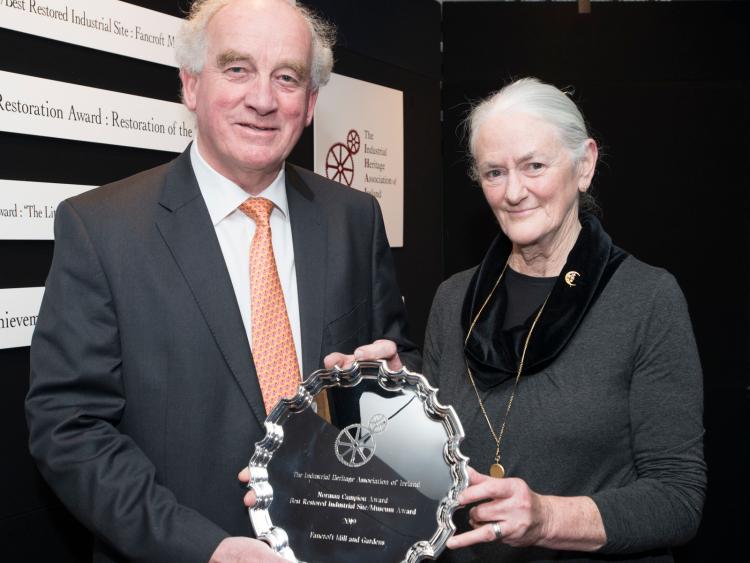 Marcus and Irene Sweeney, Fancroft Mill and Garden with the Norman Campion Award

The award recognises the professional and sympathetic restoration work of this significant historical site from dereliction, located on the Little Brosna river 4km north of Roscrea, that was first started by Marcus and Irene Sweeney in 2006. The award is named in honour of Offaly native and miller Norman Campion, a founding member of the IHAI, who sadly passed away earlier this year.

Other awards went to a team in Limerick, led by Gary MacMahon, for rebuilding the The Ilen, a 1920s 50ft timber- and Baltimore- built ketch, which was deployed around the Falklands in the South Atlantic for 70 years. Much of the reconstruction of what is the last of Ireland’s traditional wooden built shops has been by volunteers in Limerick and Baltimore, with the help of professional boat builders.

Nicholas Tarrant, ESB Executive Director Engineering and Major Projects hosted the evening. Welcoming guests and congratulating the award winners, he says: “The Industrial Heritage Association of Ireland was created by people of vision and commitment and the fruits of earlier efforts have served to create a notable increase in awareness of our rich industrial past.  The Association recognises that we should not only have a sense of shared ownership for our past but it is something we strive to safeguard and celebrate.

"It is also ESB’s pleasure to host the awards in our new Archive. A landmark development for ESB, it represents a tangible delivery to both celebrate and safeguard our history and heritage which forms part of the story of the industrial, commercial and social development of Ireland.”

Paul McMahon President of IHAI adds: “IHAI are delighted with the continued and invaluable sponsorship of these Awards from ESB which seek to give recognition to individuals and organisations who have made an outstanding contribution to promoting and safeguarding industrial heritage on an all-Ireland basis.