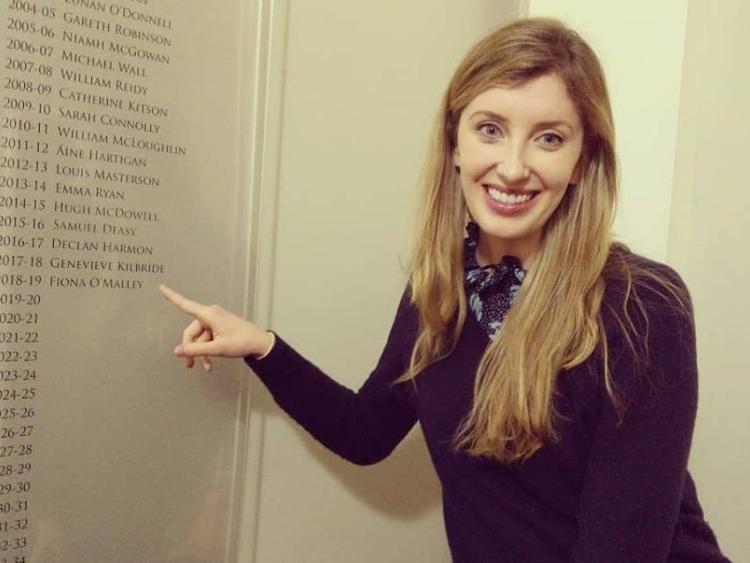 Fiona O’Malley, who grew up in a cottage in Coleman’s Terrace in Tullamore has been elected the Auditor of the Honourable Society of King’s Inns, and last week gave her inaugural address on ‘A Century of Women in the Law.'

Fiona is a direct descendant of Granuaile, the ‘Pirate Queen’ and attended Gaelscoil an Eiscir Riada and the Sacred Heart School in Tullamore. She went on to complete a BA International in NUIG then studied a Masters in Journalism in Kingston University London, while she worked at The Sunday Times and VOGUE magazine. She completed a diploma in sports law at the Law Society of Ireland and sits on the boards of Action Aid and Shine.

In her speech, she reflected on the history of women who were the pioneers of their gender in law in Ireland; the barriers they had to break through to achieve equality which include the absence of the vote; and the marriage work bar.

She spoke about landmark cases on women’s rights like McGee v the Attorney General, Roe v Wade, the Cleveland Board of Education v. LaFleur,Mary Murphy v Bord Telecom Éireann, Breda Nathan v Bailey Gibson Ltd and Irish Printers Unions, and De Búrca and Anderson v the Attorney General, and said that while society shapes and reshapes the law, the law also plays a pivotal role in shaping society now and in the future.

She spoke about female trailblazers in the legal sphere, such as Averil Deverll, the first woman called to the Bar of Ireland; barrister, senator and the first female Judge of the circuit court, Justice Catherine McGuinness; Susan Denham, former Chief Justice of Ireland from 2011 to 2017 and the first woman to hold the position; and former President Mary Robinson.

Fiona said that as a society embracing gender equality, Ireland has come so far. She said that it is important to acknowledge the evolution and breakthroughs in gender equality, but emphasised that complacency could lead to apathy.

“Whilst it is humbling and moving to look at how far we have come, we should use this as motivation to close the gap on how far there is left to go,” Fiona said.

“I hope that in the future, our sons and daughters will have achieved such a level of equality that they will be perplexed when they hear about Averil Deverell, and they will struggle with the very concept that she was called to the bar only a century earlier.”

Fiona is the 189th Auditor and the twelfth woman to take on the role. She works full time as the Head of Communications for CMRF Crumlin and is studying to become a barrister in the evenings.