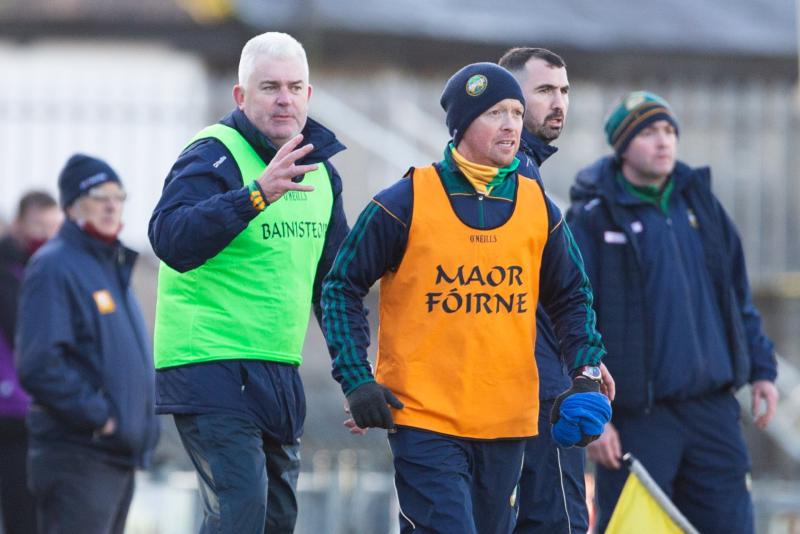 TAKING it one step at a time, one game at a time is the most important thing for Offaly minor hurling manager Leo O'Connor as he prepares for Saturday's 2020 Leinster Minor Hurling Championship final against Kilkenny in Portlaoise.

Noting that there is increased optimism about the future of Offaly hurling with the seniors getting promotion to Division 1, the Limerick man remarked:

“There is a very good feel good atmosphere in the county and long may it continue because hurling needs Offaly as much as Offaly needs hurling. That is the most important thing, that we are taking a step the whole time. We are taking another step closer to competing in the Liam McCarthy Cup. That is the single most important thing, that you work through the levels. It's like minors to U-20 to seniors. The seniors have to work back now from the Christy Ring Cup up to McDonagh back to the McCarthy Cup. That is vitally important.”

It hasn't been a simple campaign for Offaly who had real momentum built up last December with wins over Laois, Kildare and Westmeath but then had the final pulled because of Covid-19.

“We will wait any time of the day or month or year for a Leinster minor hurling final. The lads have been so patient about the situation and it is a credit to the GAA that it is going to be played because at one stage we feared it wasn't going to be played. The important thing is the lads are getting the opportunity to play the Leinster final. Everyone deserves that opportunity. The situation we are in now is that it is going to be played and it is a mighty opportunity for all those young lads to look forward to. Such is life but that is the way the world has developed over the last year and a half. To be fair to them, they have been patient and credit to the parents because it hasn't been easy with the highs and the lows of it. We lost a little bit momentum, having three matches in a row and having won all three to get to a Leinster final. Then we were back into lockdown but such is life and we dealt with it. We are back on the horse working away again.”

A member of the Limerick panel beaten by Offaly in the 1994 All-Ireland senior hurling final, O'Connor's appointment represented a rare step for the county as they appointed an outside minor manager.

He speaks with great passion and enthusiasm about Offaly hurling and wants to see the game progress at all levels in the county.

“The whole thing is when you get to these situations and I have seen it with my own county Limerick, it helps. Limerick has contested five Munster finals in a row. We only won two of them but the most important thing is you are developing lads and you are giving lads a slice of the pie at 17 years of age. You are giving them the drive to push on at U-19 and 20 and then onto a senior panel. The most important thing is that the work is coming and you can see the way development squads have won. That is not just because of Leo O'Connor, that is because of what we have done at underage level. The amount of work that has gone in over the last two or three years.

“My management team of Alan Corboy, Leonard Deane and Ray Codial, they have worked their ass off. You can see it there tonight. We have two training sessions there. We have 2021 minors and 2020 minors, it is hard going but that is a credit to my management team and the way the lads are working. You can't give them enough praise. It is all part of a wheel and it is just developing, developing.

“We have a 2021 Leinster minor hurling semi-final in July, that is another part of it. You are trying to develop the whole time and you are trying to get other guys to come along with the lads playing the 2020 final. It is all part of a circle and everyone plays their part.”

How have things gone since you came back in?

“We were doing zoom classes with them on Saturday mornings and Sunday mornings and maybe one during the week. We were trying to get as much work as we could into them. We obviously couldn't meet. They all tuned into their zoom classes. There was an attendance record kept for all of them. It wasn't a case that this was optional. There was buy in or buy out. That is the way we worked.”

“We are playing Kilkenny and it is all on the day now. Kilkenny have only one match played in the Leinster championship, we have three matches played. We have to go out and take them on and play them on the day. The start is going to be vital, the first fifteen, twenty minutes. How we settle and get going is the most important thing because if we get that, we can step up another gear. We can take the challenge to Kilkenny. We have nothing to be afraid of.

“This is what we are trying to drum into them. If we take it game by game, work tackle by tackle, minute by minute and that is the most important thing at this stage.”

Where do you see Offaly hurling at the minute?

“The underage academy up here is back working. The 2021 minor team will be very competitive. There is Celtic Challenge teams and it is very important that it keeps momentum and keeps rolling on. The senior team are going really well. The U-20 hurling team are getting their game time in. It is important that every match counts at this stage and you keep the momentum going.”

Like the Offaly minor football manager, Ken Furlong, O'Connor has noticed the physical development of players in the last few months.

“It is like an U-18 minor and that is the most important thing. They really have developd and that is due to their own work rate because we gave them programmes to work on at home. I can't speak highly enough of Alan Corboy because the programme he has given them has worked. And Leonard and Ray, everyone has all stepped up to the plate. It is so important that these boys are recognised for what they have done as well. We are all a management team.”

His prepararations are complicated by the fact that dual players Cormac Egan and Patrick Taaffe will be involved in the Leinster minor football final between Offaly and Meath the previous Wednesday. The Leaving Cert, however, has created greater complications.

“We have that dual player issue, we have two Patrick Taaffe and Cormac Egan. Patrick is back from an injury he picked up against Kildare. There is a small hidden thing in this in that we have nine guys doing Leaving Certs. We have to work through that and hopefully they have all done really well. Hurling is a little bit of a pressure release for them during the Leaving Cert. We have done very little contact. It has just been mainly hurling and getting their skills right.”

He spoke about the Kilkenny challenge being their toughest one.

“Totally. Richie Mulrooney is an experienced minor hurling manager as well. You have the tradition that Kilkenny bring but finals are finals. They are there to be won and it is a one off now. Okay we had momentum but we have to break it down now, it is a one off game. It is an All-Ireland semi-final as well, not just a Leinster final. There is another carrot in front of us here as well. It is a matter of pushing on and seeing that All-Ireland final.

“From our point of view, the Leaving Cert is over, you are playing hurling in the middle of July. Who wouldn't want to do that, lads have stepped up and have taken the opportunity.”

Offaly to make no mistake in Christy Ring Cup opener