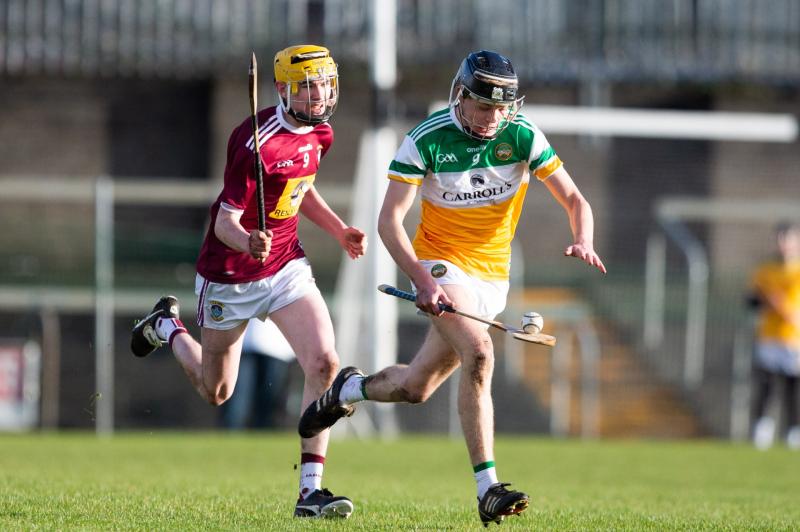 WHILE it is six months since their last championship match, Offaly will be approaching Saturday's 2020 Leinster minor hurling final against Kilkenny with guarded optimism.

They will be underdogs in Portlaoise and the form book is really of no relevance in this one but Offaly are entitled to confidence that they can perform and give a really good account of themselves.

The Covid-19 enforced delay means that this is a very different final. It is a summer final rather than the winter one it would have been last January and that is the one welcome spin off from the long delay.

It is also like a traditional minor final with the players U-18 now as distinct from the U-17 they were last year. Several players have made significant physical development in the past few months, getting taller and stronger. That is of course the same for both sides but it all combines for what should be a very entertaining game of hurling.

Offaly have a lot of very good hurlers and they were playing very well before the final was postponed just after Christmas last year. Wins over Laois, Kildare and Westmeath don't signify anything special and Kilkenny will be an entirely more daunting challenge. However, they are all counties that Offaly have lost to in recent years and beating them very easily represents very important steps forward.

Offaly had improved with each game too. They beat Laois in the first round by 2-18 to 0-12. 1-9 to 0-8 ahead at half time, Offaly really upped the ante in the second half with Birr protege, Lochann Quinn shooting the lights out with 0-14, three points from play.

They had a big 1-18 to 0-9 win over Kildare in the qaurter-final. 0-4 to 0-1 behind after a few mintues, they went on a rampage that yielded 1-15 without reply and it was a performance that commanded respect.

Offaly played their best hurling of the year in the second half of their 2-18 to 1-8 win over Westmeath. They were engaged in a real dogfight in the first half, they trailed by 1-7 to 1-5 at half time and when they went three points down early in the second half, it looked like they were in trouble. Their hurling from here to the final whistle was sensational. They scored 1-13 without reply as a shell shocked Westmeath failed to score again and the quality of Offaly's hurling was really impressive.

By contrast Kilkenny had to play just one game and they had an impressive 0-23 to 1-14 win over Wexford. They are nearly always strong at this level and Offaly know that they are up against it.

Offaly are managed by former Limerick hurler Leo O'Connor. His appointment represented a big step for Offaly as outside managers are generally not put over county minor or U-20 teams. However, it has worked very well and him and his management team have gelled a very good team together.

Their passion and genuine interest in Offaly hurling is also obvious. They have done a lot of work on players, individually and collectively.

It is too early to make any definitive statements but there has been evidence in the past year of improvement in Offaly hurling. Baby steps but movement forward nonetheless. The seniors have got promoted from Division 2A in the league, the U-20s are working hard under Gary Cahill, and the achievement of this squad in reaching the Leinster minor hurling final is very welcome. There is also positive word of mouth emerging about the prospects of the 2021 minor hurling team and there is more optimism about the future than in a long time.

In hurling, the most noticeable improvement is in the quality of their stick work and first touch. Offaly hurling has been blighted by fumbling and foostering for some years but this team have shown themselves to be fast and skilful. The work going on from development squads level up is beginning to yield dividends and the hope is that Offaly will be competitive in this final. Recent experience suggests that this may not necessarily happen but there does seem to be something different about this team. Their attitude and desire is top notch and they look like they want to hurl at the highest level.

Offaly hurling is still a work in progress. There is a long road ahead and while the improvement in stick work and touch is very welcome, there is a lot of work to be done yet in intensity, fitness and physicality. The type of work that takes years to develop but Offaly need to go there is they are to return to the top tier.

This starts from the ground up and it has been very encouraging to reach this final. Offaly have a lot of very good hurlers, promising lads that will play senior. Their star player has been Lochlann Quinn. A nephew of former Offaly hurlers, Gary and the late Adrian Cahill, his score taking has been phenomenal. He got 0-14 against Laois, 0-10 (7f) in the quarter-final against Kildare and 0-11 (5f and 1 “65”) against Westmeath.

At the top level now, every team needs a player who can put up big tallies and Quinn is doing that for Offaly but there is a lot more strings to their bow. They have a very steady, honest and hard working defence, led by full back Charlie Bracken and centre back Sam Bourke. Colin Spain and Cathal King had been performing very well for them at midfield with Like Carey and Charlie Mitchell giving great scoring assistance to Quinn up front.

Offaly have two dual players in Cormac Quinn and Patrick Taaffe, who is back from injury. The minor footballers will have first use of them in Wednesday's minor football final but once they don't get injured, two games in a few days shouldn't bother young players. Egan will start both finals and his pace and direct running is a huge asset to both footballers and hurlers.

It is a pity that spectators can't go to this game, apart from 200, as Offaly would bring thousands to Portlaoise. However, they will be eagerly tuned in to their phones and televisions as the action unfolds and the big thing for Offaly is to stay with Kilkenny into the second half, sow seeds of doubt in them and give themselves a chance.

For Offaly, it is to get enough ball into the forward line to give them a chance. They have plenty of scoring potential and will punish a team once they get the supply.

That history will repeat itself and Offaly won't be competitive. However, they have been playing very well and they should go close in this.

It is impossible to properly judge this game as it is so long since either team had a championship match and the Leaving Certificate has complicated preparations. Kilkenny are favourites though that is based primarily on the past. At the same time, any observer would make them favourites and it will be interesting to see how Offaly fare. They have a chance. Another huge incentive is that this is also an All-Ireland semi-final with the winners going straight into the All-Ireland final.