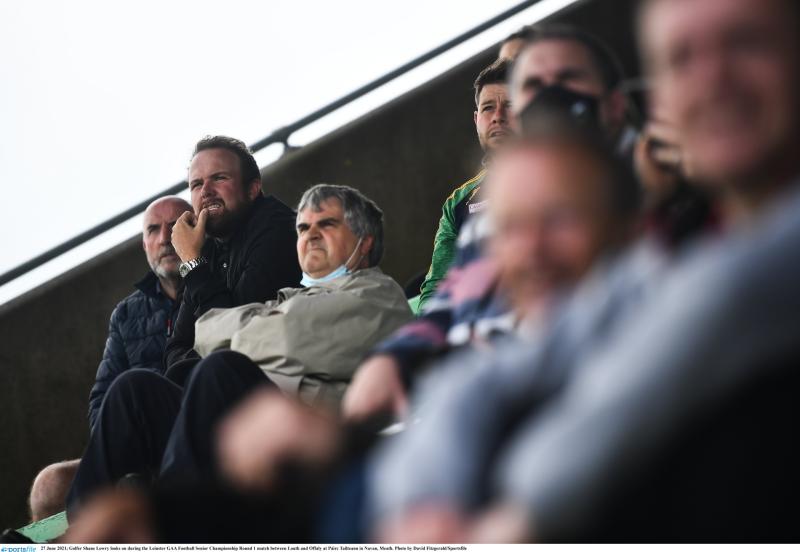 THE MAN BEHIND THE WIRE

THE ability to win tight games is a very welcome development for Offaly footballers and it has gott them out of a few very tricky corners this year.

Last Sunday's Leinster Senior Football Championship win over Louth was a case in point. It was a real tight, championship tussle and it could have went either way. It was also the type of game that the county senior footballers have grown accustomed to losing in the past couple of decades.

Offaly rode their luck a bit. They were fortunate that Sam Mulroy missed a late chance of winning it for Louth and their three goals were quite fortunate – two of them came from defensive calamities, the third was the luck of the bounce as a Bernard Allen shot for a point rebounded off the post.

Yet those are the type of breaks that you get when things are going well. You generally get what you deserve in football and Offaly have earned their share of good fortune.

It means that 2021 will go down as a very successful year for them. At the start of the year, their targets were promotion to Division 2 of the National Football League and beating Louth in the championship.

Outside of the camp, few truly expected them to get promotion, even if there was always a possibility of it. Again, they got the hop of the ball with a split division because of Covid-19. Offaly ended up in the south group with Wicklow, Limerick and Tipperary. It was considerably easier to progress out of a four team group than a normal eight-team one. The north division also looked tougher with Derry, Fermanagh, Longford and Cavan – Cavan and Wicklow were relegated back to Division 4 with Derry and Offaly promoted.

Things fell nicely for Offaly but you can only play the hand you are dealt and they played it very well. They had to work hard, play well to win all their games and the matches against Limerick, Tipperary and Fermanagh required real character to come through.

In recent years, Offaly would possibly have lost all these games. They would have reverted back into a defensive shell, panicked with the winning post in sight and been over ran.

It was different on this occasion. Instead, they dug deep and grinded out the results. There were flashes of old failings as they became nervous, dropped too many players back into defence and became ultra cautious on the ball. It was never to the same extent as the recent past and they continued to try and do the right thing, even when the game was going wrong for them. They retained their work ethic and they were able to get crucial scores at the right time.

It wasn't always pretty and their struggles in the last twenty minutes against Fermanagh in particular was painful to watch but the result was the bottom line and they got across the line.

The Fermanagh game was Offaly's biggest one of the year. It was a winner take all promotion shootout and Offaly got there.

They had a very poor performance in the Division 3 league final against Derry. They just didn't perform on the day but if there was any place for such a game, that was it. Promotion was already secured and the result didn't matter that much.

It might have been the wake-up call that Offaly needed. It certainly brought the players back to reality and it left them with a point to prove against Louth. They proved it last Sunday, albeit by the skin of their teeth. Had Sam Mulroy converted that last gasp chance, a very different article would be written now.

He didn't and Offaly got the breaks thy needed in extra time to advance to a quarter-final meeting with Louth.

Winning those types of games brings back fond memories of Offaly's past. It may be at a lower level but there was a time when Offaly won almost every game they should win, and took a fair few against the head. Offaly are not there yet but they are moving in the right direction.

It is important to take those baby steps forward. Winning games always helps build confidence. Offaly didn't win a single Leinster Senior Football Championship game from 2008 to 2015 and as time wore on, it became a major problem for the players, a huge barrier to be surmounted.

They finally broke that duck with a 2016 win over Longford and since then, they have beaten Carlow and now Louth in the Leinster championship. It is absolutely crucial that Offaly beat the Division 4 and 3 sides in the championship and they are beginning to do that.

There are other challenges facing Offaly. They now need to beat a county from the next tier up. Dublin are so far ahead that Offaly can forget about them for the moment but Kildare and Meath are realistic targets.

They need to beat one of them to take the next step forward. The last two years suggests this is achievable but they haven't managed to do so yet. They also need to close out games when they have opponents on the ropes.

They were three points ahead against Louth last Sunday heading into the last five minutes and didn't close it out. Louth hauled it back by scoring points and almost snatched that winner at the death. Similarly, Fermanagh almost came back in the Division 3 semi-final and Offaly have ended up living on their wits late on.

Discovering a ruthless streak and having the confidence to keep playing constructive attacking football when things are going wrong is the next hurdle for Offaly to surmount. In extra time on Sunday, they just threw caution to the wind, went at their opponents and they looked really good. They have begun to lose the fear factor that bedevilled them for several years but there is plenty of more work to be done on this.

Rome, however, wasn't built in a day and slowly but surely, Offaly are beginning to improve. At the moment, that will do nicely.

The 2020 Leinster Minor Hurling Championship final will be streamed live from Portlaoise at 12 noon by Offaly GAA's 'Faithful TV'. The link will be available on the Offaly GAA website or may be accessed directly through https://page.inplayer.com/offalygaafaithfultv/

Meanwhile, Offaly senior hurlers' Christy Ring Cup game versus Sligo will be streamed live at 3pm on Saturday through the Sligo GAA website, while the footballers' Leinster Championship quarter-final against Kildare on Sunday will be shown on www.gaago.ie

1 – Five clubs had two players each on the Offaly senior football team against Wexford in the 2011 senior championship. Four of the clubs were Clara, Tubber, Edenderry and Gracefield. Name the fifth?

2 – On how many occasions did Offaly beat the reigning All-Ireland senior hurling champions in the championship?

1 – How much in total did the Dooley brothers score in the 1998 All-Ireland senior hurling final?

2 – Name the two members of the 1988 Offaly U-21 All-Ireland winning champions who were sons of well known footballers of the same name from the 1950s/1960s?

3 – When Offaly played Galway in the National Hurling League on February 4 2001, they recorded their highst score against their neighbours in the absence of Johnny Dooley. Offaly introduced a 19 year old debutant who scored 0-14 of the 0-23 total. Name him?