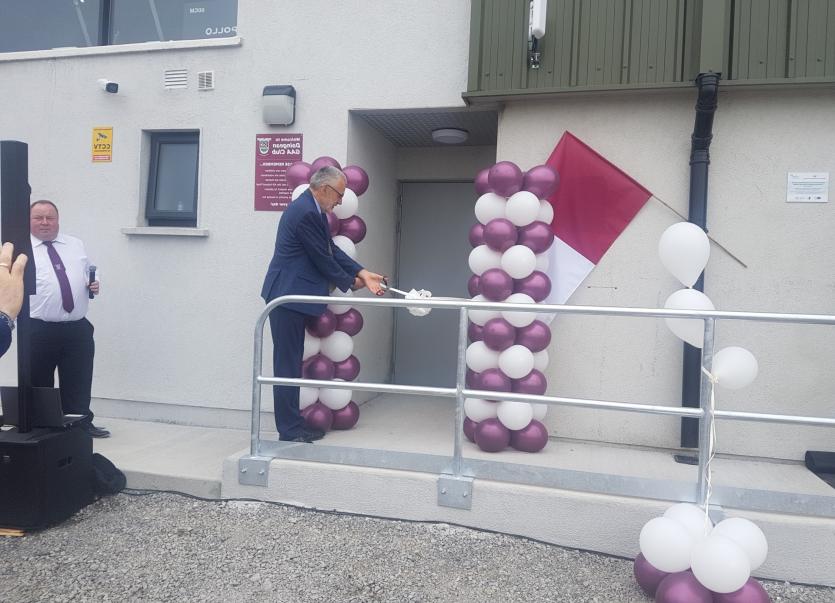 THERE was a great air of celebration, a real feeling of satisfaction as Daingean GAA Club officially opened their stunning new sports centre on Saturday afternoon.

The Daingean GAA Club Sports Centre was officially opened by GAA president, Larry McCarthy, who was performing his first formal function of this nature since taking over a few months ago.

The new Sports Centre was built on the grounds of Daingean GAA Club, on the Croghan side of the pitch, and will be available for use by the wider community. A near €400,000 project, the end result is a credit to all involved. A physically impressive structure, it comprises of a large hall downstairs that can be used for indoor games, training and meetings. 330 square metres, it also includes two new dressing rooms with ancillary facilities.

Upstairs includes a modern, fully equipped gym with kitchen facilities and the impressive glass windows over looking the pitch cap it all off wonderfully. There is an impressive display of photographs of successful Daingean teams on the way upstairs and it has been built with support from the National Lottery, other Government agencies and GAA bodies.

With club members and former stars watching on, master of ceremonies Paul Keating introduced the speakers at the opening ceremony.

Dates confirmed for Confirmations for schools in Tullamore

Offaly GAA chairman Michael Duignan complimented everyone involved in the successful completion of the project. “It is fantastic to see what is there, it is a fabulous facility,” he noted.

Mr Duignan added: “You are clearly doing the right things but most importantly, you are doing it in the right spirit and you want to go places. We are the same in Offaly. I hope this facility will bring your club forward.”

Vice chairman of Daingean GAA Club, David Walsh thanked the many people who provided funding for the project and singled out their main backers: the National Lottery, Bord na Mona, Edenderry Credit Union, Offaly Leader and the Offaly Sports Partnership. He revealed that they have further plans for the future to enhance their facilities.

Chairman of Daingean GAA Padraig Keating had a lengthy list of people and committees he wanted to thank, concluding with glowing praise for local man, Willie Kennedy who had helped drive the project forward on an almost daily basis.

Larry McCarthy described it as a “fantastic development”, adding: “You have a lot of sweat put into it”.

He noted that Daingean GAA have provided a walking track as well as engaging in the healthy club initiative. He spoke about the importance of these as it puts the GAA at the centre of community life in the area.

Mr McCarthy stated that there is currently good momentum with Offaly teams as they have received promotion in both codes. He threw down the gauntlet to Daingean to return to their former glories at senior level. Winners of the Offaly Junior Football Championship last year, Daingean won their last senior football title in 1965. “Isn't it about time you won an Offaly championship again after so many years,” he smiled.

Padraig Keating concluded the formal part of the afternoon by talking about the work going on at a young age with their mini maroons. “It is for the kids that these facilities are being developed,” he said.