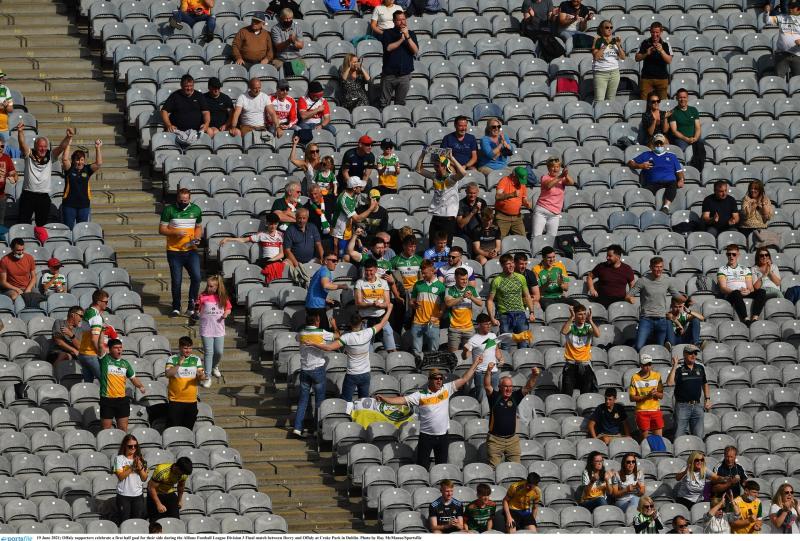 OFFALY supporters are unlikely to have access to tickets for big matches coming up in the next two weeks.

The Offaly GAA County Board will only get 95 tickets for each of those three games. They will receive 50 complimentary tickets for distribution to panel members, back room staff and officials and they have the option of purchasing a further 45 tickets.

The board have yet to decide what way to distribute these 45 tickets but there is unlikely to be a general sale of such a small number. The board held a draw to give supporters the option of purchasing 100 tickets for the National Football League Division 3 semi-final against Fermanagh in Tullamore a couple of weeks ago but they have much less tickets available for the next three matches.

The 45 additional tickets may be distributed to players and other personnel, though Chairman Michael Duignan said today that they haven't decided what to do with them yet. “If we do put any up for sale, it will be a very small amount,” he said.

2,400 spectators were allowed into Croke Park for Saturday's National Football League Division 3 final between Offaly and Derry. These went on sale on the Ticketmaster website and were quickly snapped up – it was deemed a test fixture for the return of spectators to sports events. While a breakdown of where those tickets went is not available, Offaly definitely had the largest crowd there as Derry recorded a comprehensive win – probably the bones of 2,000 of the supporters were from Offaly.

There will be keen demand for the next three matches with huge interest in the minor finals but attendance figures at matches won't be increased until July 5.

National U-23 and junior medals for Offaly athletes

100 spectators have been permitted to attend GAA games (club and inter county) in the 26 Counties since Monday, June 7th. This number is in addition to players, team personnel, stewards or media attendees. Where a ground has a minimum accredited capacity of 5,000, a maximum of 200 spectators can attend – this figure applies for the Louth match and the two minor finals.

It is likely that from July 5th, up to 200 spectators may be permitted to attend games, and up to 500 may be permitted in grounds with a minimum capacity of 5,000. However this will depend on progress in broader society – if 500 is permitted in O'Connor Park in Tullamore and Birr, it will be a big help to Offaly GAA and they will then stage the bulk of their club senior fixtures in those grounds until increased capacities are allowed at other venues.