National U-23 and junior medals for Offaly athletes 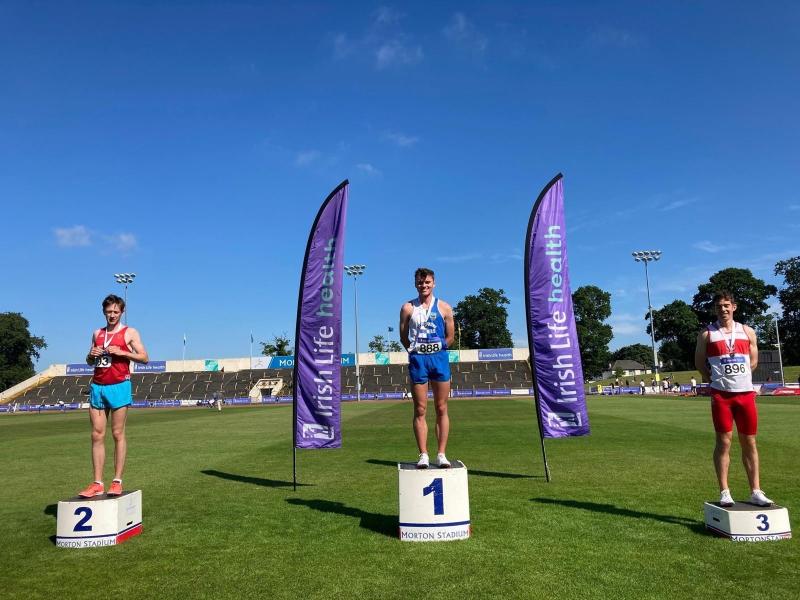 James Dunne, centre on the podium after winning the national U-23 1,500m title.

OFFALY athletes had a productive couple of days when they competed at the All-Ireland Junior (U-20) and 23 Athletics Championships in Santry Stadium last weekend.

Three Tullamore Harriers' athletes and one from Birr Athletics Club featured among the medals. Birr Athletic Club's Claire Kennedy was delighted to take gold in the junior weights for distance 28lbs championship – a very dedicated athlete, Claire is coached by Michael Kenny.

Ruby Stueven took silver in the junior women 800m, getting by the third athlete, Limerick's Sarah Hosey in the closing straight. From just outside Edenderry, across the Kildare border, Stueven's time of 2.41.61 was a personal best .

Laura Mooney took a brilliant gold in the junior ladies 5,000 metres. The Cappincur woman ran away from the field to win in a championship best time of 16.31.66. Mooney is on an athletics scholarship in Providence College, Rhode Island in the USA and she has made vast improvements in the past couple of years. The last time a Tullamore Harriers athlete won the U20 5000m was in 1997 when Ann-Marie McGlynn won the title – McGlynn, now living in Strabane, Tyrone and racing for Letterkenny AC, was agonisingly close to making the Olympics marathon this year.

Another USA scholarship student, James Dunne had a great win in the U-23 1,500 metres. The Ballycommon man raced away to win by five seconds in a good time of 3.52.35. Dunne is on scholarship in Adams State University in Colorado and the training here is clearly working well for him. Adams State University is located at an elevation of 7,000 feet in sourthern Colorado and Dunne is now enjoying and benefitting from training at this altitude. He returned home from the USA a couple of weeks ago and returned to training with the Tullamore Harriers middle distance group as he got the jet-lag out of his system.

Meanwhile, another Tullamore Harriers' runner, Mark Milner smashed the qualifying time for the European U-23 championships for the second time in a few weeks last week. The Killeigh man travelled to Milan to compete in the 800m at the XXIV° Meeting Internazionale “Città di Nembro”. Milner is on an athletics scholarship in UCD and he finished seventh in a new personal best of 1.48.30. The European U-23 championships take place in Tallinn, Estonia from July 8-11 and the Irish team will be announced on June 27.