“Winning with your club is everything” - Offaly U-20 star 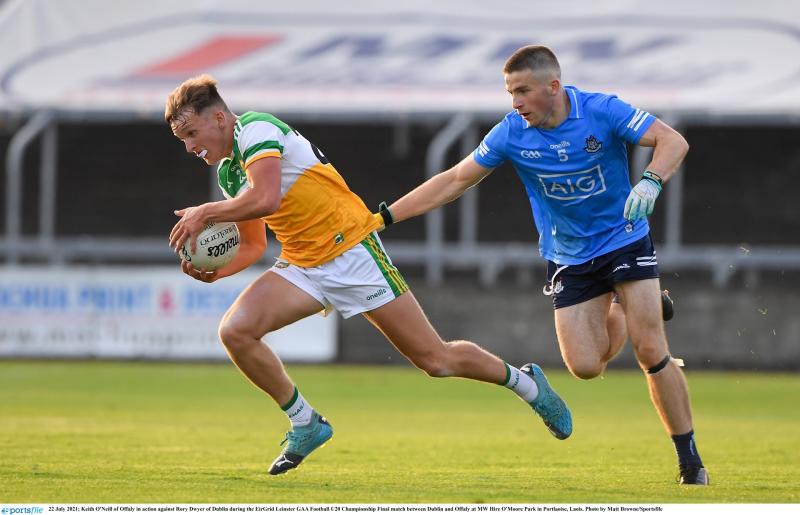 Keith O'Neill in action for Offaly in the Leinster U-20 FC final last year.

IT has been one incredible year for Keith O'Neill. Drafted into the Offaly U-20 football panel days after playing for Offaly in a gut wrenching 2020 Leinster minor football final defeat by Meath, O'Neill went onto play a pivotal role as they won a famous All-Ireland title.

A high impact sub, O'Neill made a great contribution coming on in games and his blistering run, his sense of awareness as he ran at the Roscommon defence at full speed before laying off to Jack Bryant for the decisive second half goal summed up his quality.

The All-Ireland win, however, was only the start of his fairytale year. He was magnificent as Clonbullogue won the Offaly Intermediate Football Championship title for the first time – he produced a few man of the match displays, culminating in inevitable selection as the Offaly intermediate footballer of the year.

They then embarked on a dream run through their province, culminating in Saturday's dramatic 5-3 to 1-10 win over Kilcullen in the Leinster Junior Football Championship final in Newbridge. O'Neill was earmarked for special attention by Kilcullen, tightly marked and often double teamed but he still produced another super display as he worked hard and scored a crucial goal and a point.

In the middle of it all, O'Neill experienced the trauma of an arson attack on their family farm in Clonbullogue last November. The fire at the farm of his parents Eugene and Lorraine saw sheds, offices, machinery and a milking robot destroyed, causing a massive financial loss as well as the acute personal trauma of seeing their property attacked – fortunately their house wasn't damaged and the search for the culprits is ongoing with several appeals for witnesses and information.

Football helped keep Keith and his brother Ruari on the right track – Ruari was also sensational in the final win over Kilcullen before going off injured early in the second half – and now they find themselves preparing for an All-Ireland semi-final against the Mayo champions.

O'Neill will hardly have time to breathe when the All-Ireland campaign is over. He is playing freshers football for Maynooth University where he is studying, John Maughan is drafting him into the Offaly senior football panel once Clonbullogue are finished and he will be a key forward as Offaly U-20s defend their Leinster and All-Ireland titles.

His attitude, however, is exemplary. He is not in the slighest fazed by his heavy schedule, smiling that he is young and well able for it. He is also one of a new breed of young Clonbullogue footballer, used to underage success with St Broughan's and fully focused on getting the most out of it – Clonbullogue will be serious contenders for the Offaly senior “B” football title next year.

It is a sparkling new era for Clonbullogue, who have often knocked on the door for the past. O'Neill grew up hearing tales of ones that got away and hard luck stories and speaking minutes after the win over Kilcullen, he admitted that the lifestyle of some players may not have been conducive to success in the past – Clonbullogue have had some excellent footballers over the decades but also had a reputation, whether deserved or undeserved, for partying hard.

O'Neill was asked about what changed for them this year?

“Jack (manager, Joe Kilmurray from Rhode) came in and he told us on the first day, there is going to be a culture change in this village because we used to be notorious for drinking and partying and lads going down the wrong route. Jack didn't put in any drinking ban or anything like that but he told us, it is up to us to change the culture. Lads got together, no one missed any night and now we are here.”

Had you experience of this culture?

“Ah yeah, you would and you would hear it from other villages and parishes. That you are not going to do anything because you are drinking. We had a load of young lads this year and we have other lads coming up next year.”

The flying forward stated that underage success with St Broughan's whetted their appetite and led them down a different road.

“We grew up with St Broughan's really and we had success with them. You really don't want to start drinking when you get on a roll and are winning and before you know it, you are playing for Clonbullogue and you didn't really start that drinking culture so you just continue it.”

They will enjoy their Leinster success for a day or so but he stated that it will be quickly back to basics.

“If we won Leinster ten years ago, the boys would be on the drink for ten days but now there is talk of us only having one night and going back training on Monday. Get straight back into it and we have an All-Ireland semi-final to look forward to.”

The final was an extraordinary affair with Clonbullogue leading by 3-0 to 1-4 at half time and not scoring a point until the 40th minute.

“Stop, we were the best team in the first ten minutes and got the goals. Then Kilcullen came back. We got a red card. Shur we scored more goals than points. If you had said that to me before, I wouldn't have believed you at all.”

He was disappointed that they didn't register a point in the first half.

“We were told at half time we had eight wides, Jack let us know and we copped onto ourselves in the second half. We got into our shooting zone.”

After having such a special year with Offaly, what does this mean to you?

“Winning with your club is everything, especially when it is Clonbullogue. You can hear them there, they are not used to winning. Winning an intermediate for the first time in this history was great and now finishing out with a Leinster. An All-Ireland is next on the agenda.”

O'Neill spoke about his busy schedule. “It is hectic but look I am young and I should be able for it,” he declared.

He also talked about the role football played after that dreadful arson attack on their farm.

“The day it happened was very tough, we just didn't know what was going to happen but the GAA team was very good here. Every single one of them sent a text and let us know they were here for us. That was a big help to us.”