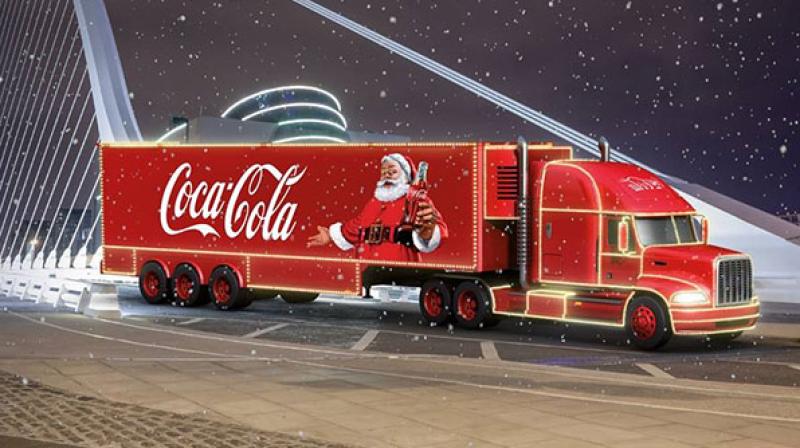 Now in its eighth year, Coca-Cola’s Christmas Truck Tour has delighted thousands of visitors across the country with many more visitors expected to experience the magic in 2018. The Coca-Cola Christmas Truck Tour will make its first stop in Galway on the 30th of November, with a further 10 stops in towns and cities throughout the island of Ireland including its final stop in Dublin on the 16th of December.

Unfortunately, it won't roll into the Midlands this year but here are all the locations on the 2018 Christmas Truck Tour:

In 2018, the Coca-Cola Christmas Truck Tour will be stopping at the following locations across the island of Ireland;

Bringing magic to people across the island of Ireland during the festive period, each Truck Tour stop will feature a glittering winter wonderland setting nestled amongst a festival of lights. Visitors will be able to enjoy a can of Coca-Cola Zero Sugar, Diet Coke or Coca-Cola Original Taste at each stop, enjoying exclusive photography opportunities and creating magical memories that will last a lifetime. This year all Truck Tour visitors will also be able to purchase exclusive Coca-Cola merchandise at each stop. All proceeds from the sale of merchandise will be donated to St Vincent De Paul.

Over the past eight years, the hugely-popular Truck Tour has racked up serious mileage, travelling the length and breadth of Ireland delighting families with the iconic ‘Holidays are Coming’ jingle.

This year, as well as celebrating the magic that the Coca-Cola Truck Tour brings to Christmas, each Truck Tour stop will encourage consumers to recycle their cans, in line with Coca-Cola’s World Without Waste global commitment to collect and recycle a bottle or can for each one sold by the year 2030.

Often said to mark the official start of Christmas, and a regular feature of the festive TV schedule, the famous ‘Holidays Are Coming’ advert will also return to Irish screens once again.

Petre Sandru, Country Manager of Coca-Cola Ireland said: “Christmas is all about sharing festive goodwill with friends and loved ones. We can’t wait to start spreading holiday cheer across the island of Ireland with the return of our iconic red truck. We’re excited to announce lots of new additions at each stop, with the tour bringing a sprinkling of festive magic to our customers and also reinforcing an important message encouraging more people to recycle on the go.”

To find out more about the Coca-Cola Christmas Truck Tour and see the full schedule, visit www.coke.ie/trucktour. Christmas fans can also get involved through facebook.com/cocacolaireland and on Twitter @cocacolaie. Join the conversation using #HolidaysAreComing.