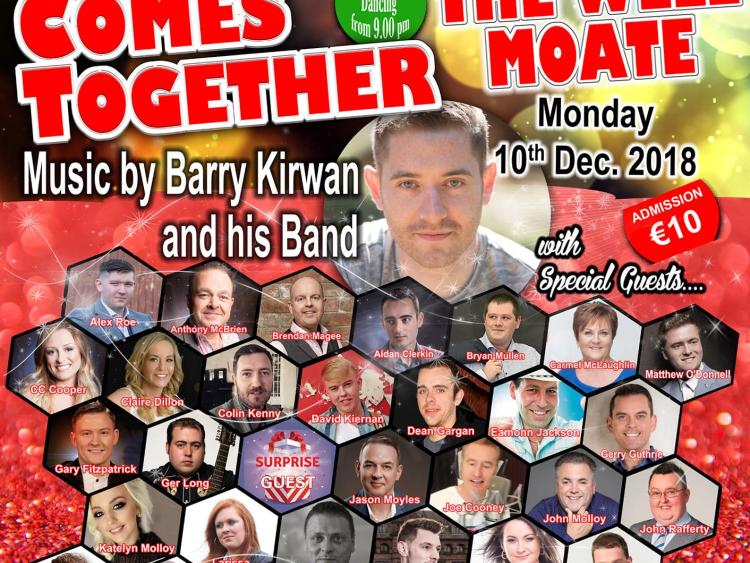 ‘The Meaning of Christmas’ will be launched in The Well, Moate, when Barry Kirwan and his band, together with a line-up of talented country performers, take to the stage on the night of Monday, December 10th, for what should be a spectacular night’s entertainment. The song itself will be available across all digital platforms from December 3rd, so with the public’s support, it could well be sitting atop the charts by launch night.

Among the artists featured on the single are Barry Kirwan, Olivia Douglas, Robert Mizzell, Colin Kenny, Sabrina Fallon, Alex Roe, Jason Moyles, and one of the main organisers behind the project, Ger Long, who told us a little bit more about the artists involved, and why so many wanted to play their part in supporting the cause.

“Well, we’ve got over fifty artists involved at this stage, between those who were able to make it when we were recording the song – not everyone could be there due to work and family commitments, which is normal with a project on this scale – and those who’ll be hitting the stage to perform on the launch night. We have thirty artists who have actually put their vocals to the track, and we’ll have about thirty-seven who’ll be in The Well in Moate on December 10th for the launch night [including all of the aforementioned, plus John Molloy, Gerry Guthrie, Larissa Tormey, Claire Dillon, Richie Remo, and many more]. So as you can see, there’ll be some artists involved in both the single and the launch night.”

“But”, added Ger, “another important point we want to get across is that we want to see this become an annual fundraiser, so artists who weren’t on the actual single this year, for the reasons mentioned, will hopefully be able to sing on next year’s. And we’ve already had some fine country songwriters offer to write us an original song for next year.”

Because the country music scene in Ireland is small enough itself, in so far as most people who are involved in it tend to know each other, it’s almost like a family in that regard.

“Definitely, I think there’s a closeness and a bond there among everyone. And at this time of the year, family is what’s on peoples’ minds more than anything else. And family at Christmas is really all about children, that’s really where all the sense of fun, and excitement comes from.”

Ger continued, “But of course this year, like every year, there’ll be some families who will be spending their time together in places like Temple Street, and the reason so many of us from the country scene have come together like this, is just to try and do something that might ease the weight on their shoulders. So that’s the aim. And people can help in two very important ways. The first is by buying the single, and getting it into the charts, and then the second is by coming along to The Well in Moate for the launch night itself. It’ll be a huge party, and all for an amazing cause, too.”

And it’s not just the country artists themselves who have come together to bring ‘The Meaning of Christmas’ to life, as Ger explained.

“That’s right, as well as all of the artists giving their time to this, which just goes to show you the goodwill that’s out there, it goes beyond the artists too. We also have all of the musicians who played on the song, and we have The Bird’s Nest up in Bundoran, and of course The Well – two great country music venues – both lending their support. And the track itself was produced and sponsored by Harmony Recording Studio in Letterkenny. Add to that then Stephen Rosney of Rosney Media Productions, who has come on board too to take care of the video for us, and also Hugh O’ Brien of Hot Country, who’ll be in The Well on the night to capture some of the action for his show, too. So as you can see, this really is a case of country comes together in every sense of the word!”

~ ‘The Meaning of Christmas’ will be available to download on all digital platforms from December 3rd.
~ The launch night for ‘The Meaning of Christmas’ takes place on December 10th, in The Well, Moate, with doors opening at 8pm and admission just ten euro. For more information and to see the full line-up of artists involved, go to the Country Comes Together page on Facebook, or by checking the official website, www.countrycomestogether.com