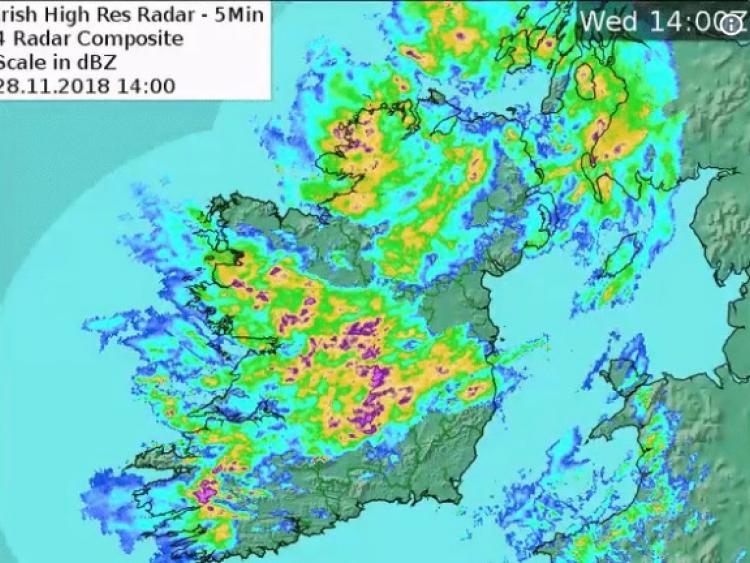 Met Éireann has extended its wind warning for Storm Diana as the country continues to be hit strong winds and heavy rain.

The Status Yellow wind warning for all of Ireland for gale force winds associated with Storm Diana is valid until 6pm Wednesday, November 28.

The end times of the orange warnings have been extended slightly.
Cork & Kerry out to 1pm.
Wexford, Waterford, Clare & Galway out to 3pm.
Our national yellow wind warning expires at 6pm.https://t.co/ozrQHtGpc1 pic.twitter.com/mICM2n7ynz

TODAY - WEDNESDAY 28TH NOVEMBER
Very windy today with some severe gusts associated with Storm Diana in coastal counties of the west and south as southerly winds veer southwesterly in direction. Rain will be heaviest and most persistent in parts of the west and north today, with the rain more scattered elsewhere with occasional bright intervals. Mild at first this afternoon with highs of 12 to 16 degrees, but temperatures falling back to between 9 and 12 degrees later.

TONIGHT - WEDNESDAY 28TH NOVEMBER
Still rather blustery at first this evening, especially across the north and east of the country with clear periods and scattered showers, with remaining rain in the north clearing. Becoming less windy in all areas overnight. However, soon after midnight a further spells of rain will feed up over the country from the south, becoming heavy with a risk of spot flooding part of the east and south. Minimum temperatures of 5 to 8 degrees.

TOMORROW - THURSDAY 29TH NOVEMBER
Overcast and wet in many places at first tomorrow, Thursday, with outbreaks of rain, heavy and persistent with the risk of spot flooding in parts of the south and east. The rain will clear into the Irish Sea during the morning to leave a bright and blustery day with sunny spells and showers, the showers frequent in the west, with the risk of hail and thunder. Highest temperatures of 8 to 12 degrees in fresh and gusty southwest winds.

Thursday night: Fairly widespread showers at first on Thursday night but the showers will become largely confined to western and northern counties later in the night. Blustery overnight with strong southwest winds. Minimum temperatures 4 to 7 degrees.

Friday: Friday will be a cool, bright and blustery day with sunny spells and scattered showers becoming more widespread in the afternoon. Some of the showers will be heavy and prolonged in the northwest. Some of hail with a risk of isolated thunderstorms. Afternoon temperatures will range from 6 degrees Celsius in northern counties to 9 or 10 degrees Celsius in parts of southwest and along the south coast. Windy at first in strong and gusty southwest to west winds but winds will ease off in the afternoon.
A spell of persistent and heavy rain looks set to extend from the Atlantic later in the evening and overnight.

Saturday: Overnight heavy rain clearing eastern and northern coastal areas in the early morning and the day will be bright with a mix of cloud and sunny breaks. There will be a good deal of dry weather, but some scattered showers. Afternoon highs of 7 to 10 degrees Celsius, highest near the south coast. Turning wet on Saturday night as persistent and at times heavy rain spreads northwards.

Sunday: Current indications suggest cloudy conditions with rain at times on Sunday but some drier periods also. The rain will turn more persistent in western areas later Sunday and more widespread rain is expected overnight. Afternoon temperatures will range from 7 degrees Celsius in northern parts to 12 or 13 degrees Celsius in the south and winds light easterly early in the day in northern counties, will become moderate to fresh southwesterly in all areas later.

Early next week: Unsettled weather expected through the early days of next week and colder over the northern half of the country especially with night frosts.