A gentle unassuming woman with a beautiful smile – Mary Colgan 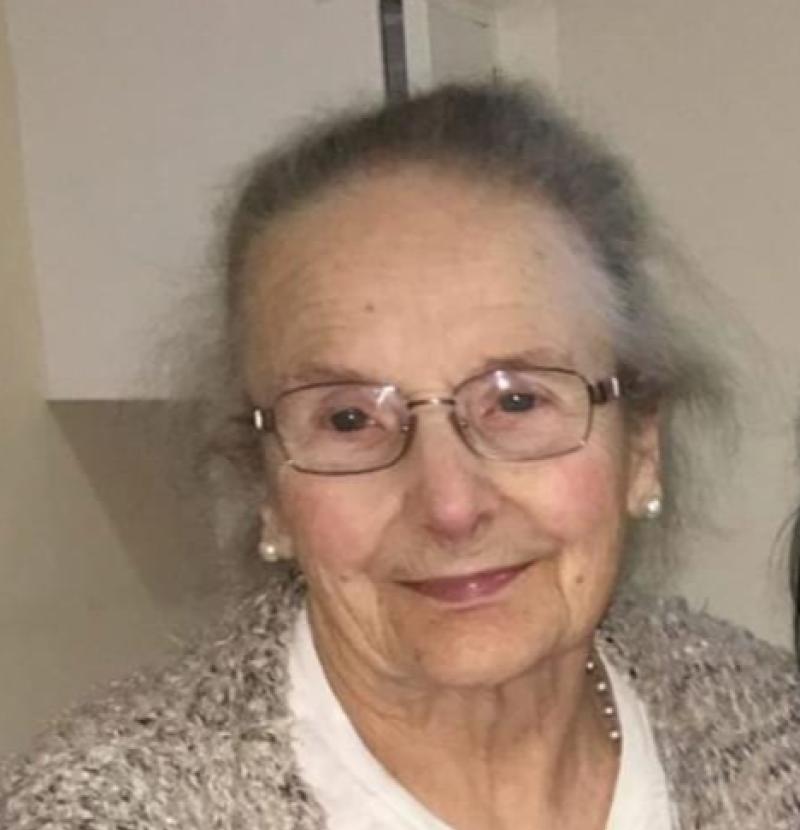 The late Mary Colgan was a very gentle and kind lady

NEWS of the death of Mary Colgan in her 90th year was met with deep sadness and regret in the local community.

Mary was described by all who knew her as a quiet, gentle, private, inoffensive and unassuming lady, with a great air of serenity and spirituality. This was often accompanied by a beautiful smile.

Born in 1931, Mary grew up in Tore, Tyrellspass, County Westmeath, where she lived on the family farm with her parents and three brothers.

She attended primary school in Tyrellspass before moving on to secondary school in Kilbeggan. She also took classes in Irish culture and heritage taught by Seamus O’Maolain.

On leaving school Mary worked in Gonoud's pub in Tyrellspass and later in Fagan's pub/shop in Rathowen.

In 1956 she met Cloghan man Pasty Colgan and they married in 1956, afterwards moving to Cloghan where Patsy had a farm. It was there that the first of some of their 8 children were born.

Then the couple opted for a different way of life and moved to Geashill where they opened and ran a pub which Patsy christened 'The High Chaparral' after a popular TV series of the same name which was running at the time. Mary became known as Victoria and Patsy as John, two of the main characters in the series. To the amusement of everyone Patsy also gave all the staff character names from the series.

Together they operated the pub for over 10 years, with Mary's pub experience and head for business helping it to become a great success. Most of the rest of her family of 8, consisting of 5 boys and 3 girls were born in Geashill.

When they sold the High Chaparral the family moved to Mucklagh and lived in Beechmount Park. The children attended the local school and received their First Communion and Confirmation there. Mary became part and parcel of the local community in Mucklagh and often travelled with others to bingo on the bus.

However, once again itchy feet got to Mary and Patsy and they moved, this time to Shannonbridge where they opened another pub. This time Patsy called it 'The Wild Geese.' A lot of the family were grown up by then and some had moved abroad. Mary and Patsy ran the pub there for another 10 years, before moving back to Mucklagh.

Sadly in 1995 Patsy passed away. Then tragedy struck again in 2009 when Mary's youngest son Gerard died suddenly from a brain haemorrhage. This was a huge blow for Mary. The family rallied around her and persuaded her to move to a house on the Clara road in Tullamore. In 2017 her grandson Damien died. This was a very difficult time for Mary and her family but it was her strong faith that got her through, especially her devotion to Padre Pio.

Mary thrived in Tullamore, she loved and enjoyed her home with its lovely garden which she tended. She appreciated being near the church which was important to her, and her family were able to visit her. She had a great sense of well-being while she lived in Tullamore and family members said it was good for her health.

She had a keen interest in current affairs and politics and read the paper from cover to cover. Even though she was a quiet and private woman, she loved talking to people and was a great conversationalist. She would correct her family if they got their facts wrong about a certain topic.

She also enjoyed travelling and went with her family to Lourdes, Fatima, Scotland and the UK to family weddings.Trips to Knock were also a favourite.

She loved family gatherings and her family often took her to Tyrellspass Castle for meals where she would regale them with funny stories about Patsy. Afterwards she would visit St Stephen's Church in the village where she got married. The Galway Bay Hotel was another favourite and she loved walking along the promenade in Salthill. The Court Hotel in Tullamore was another special place for her.

Mary had been diagnosed with Type 1 diabetes in her mid 30s and even though she had an unusually long life span living with the diagnosis, as she got older her health began to decline and she was in and out of Tullamore hospital and the diabetic clinic. In 2018 she moved to Esker Ri nursing home just outside Clara. After some adjustments she began to enjoy her time there and it became her new home. She had a lovely room and gradually got to know the other residents and the staff who were always very kind to her, her family said.

It was here the family visited and spent time in the room with her and these were very precious moments for Mary and the family.

Despite heading for her 90s Mary was young in spirit and never thought of herself as old. She loved fashion and dressing up. Her favourite colour was pink. She has left behind wardrobes of beautiful clothes.

Her favourite perfume was L'aimant which Patsy always bought her and so the family kept up the tradition remembering to bring it to her in the nursing home. She also enjoyed applying subtle make-up and lipstick. People frequently complimented her on how she looked and dressed.

The family visited her regularly at Esker Ri except during Covid which Mary and the family found very difficult as they were only able to speak to her through the window of her bedroom.However, up to the end they were by her side, until she  passed away on June 13.

Her family said their mother died as she had lived, peacefully, gently and with no fuss.But she had a huge impact on all of the family.

Her beautiful funeral mass which honoured her life, and indicated the love of her family, came through in the whole service which took place in St Colman’s Church, Mucklagh, with celebrant Fr Martin Carley. Mary was buried afterwards in Mucklagh cemetery. Denise O'Toole and her father provided the music and singing. Songs at the funeral were described as very appropriate such as Jealous of the Angels and The Rose. Gifts were brought to the altar by her great grandchildren.

Her family wanted to thank Phil O’Reilly junior for his professional and caring service.

May Mary rest in peace.

Mary’s funeral can be viewed on https://youtu.be/QxXU-l_kKIk

If you wish to leave a message of sympathy, you can still please do so.