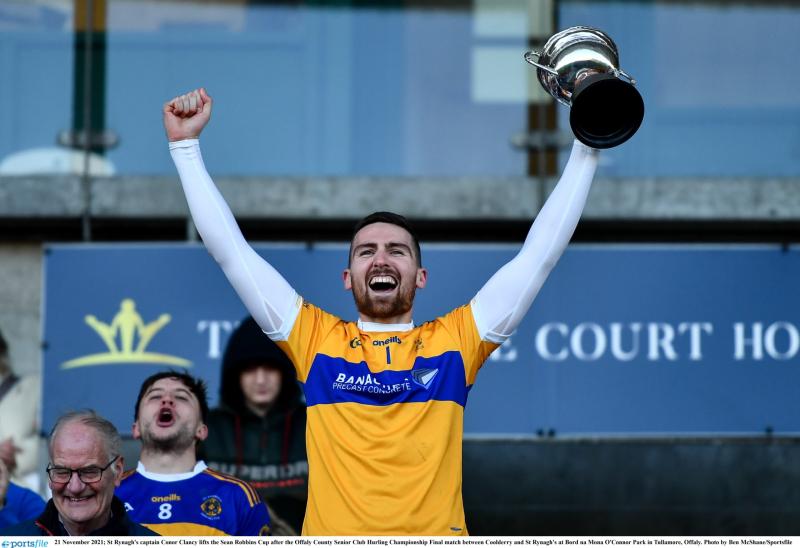 When the discussion for man of the match in Sunday’s final came around in the media box after Sunday’s county final, the lack of a clear and obvious winner meant that a lot of names were thrown into the mix. One of those was St. Rynagh’s goalkeeper Conor Clancy, who hadn’t put a foot wrong over the course of the game, dealing with a couple of high balls very well and using the ball accurately. However the other side of the coin was that he wasn’t really asked to make a save at any stage, so the conversation moved on.

After the game, the winning captain freely admitted that keeping his patience when time was ticking on wasn’t an easy thing to do!

“I have a huge belief in this team, I always believe that no matter what the situation, we’re going to win. But when the clock ticks around to 61 and 62 minutes and you’re not where you need to be, you start to doubt everything,” he said afterwards.

“I tried to go up and down the field a few times to get a few scores, but the boys put me back in fairly quick,” he quipped.

“You can only do your own job, you have to trust the boys around you and down the field. Even when it comes to puckouts, I know that if I put it in the right area, the boys will get there. It’s hard at times, you feel like if it was yourself, you might have put one or two of them wides over, the shooting got a bit erratic! But that’s just a part of sport, you just have to trust them, run with them, and hope you get over the line.”

In most sports, but in hurling in particular, no position seems to produce coaches and managers like goalkeepers. Perhaps it’s because so much of the game for custodians is simply observing, while staying sharp for that one crucial moment, but it’s natural for them to observe what’s happening a lot more keenly than other outfield players. Clancy certainly had his take on why the game played out the way it did, with Coolderry taking over during the second half.

“To be very honest I thought we weren’t clinical enough. There was a huge battle in or around the middle third, there was contact, there was hits, there was lads getting on the ball. We definitely had as much ball as Coolderry, but we kept racking up the wide count, we kept taking bad options, whereas Coolderry were showing their experience, popping the ball out to the man in the best position. They had very few wides in the second half, but they seemed to make us pay every time we came up, whereas we took bad options.”

“But I thought we were doing a lot of hurling and we were staying right with them, I felt it was going to come right at some stage,” h remarked.

When St. Rynagh’s won the 2020 county final, the game was played on much harder ground three months ago, and their slick, purposeful hurling was much easier to watch than the scrappy, physical game that was played on Sunday. None of this was intended, in Clancy’s opinion – it was merely how the game unfolded.

“Every game takes on a life of its own, it’s not that we try to hurl through the lines, we just try to give it to the man in the best position. But Coolderry’s work rate swarms you, they’ve two or three men around the ball all the time, if the ball breaks down at all and you miss a lift you’re in trouble. Even though the pitch was excellent, it’s still wet, it’s still heavy, it’s not as easy to get your first touch or to get the jab lift up. So sometimes you have to go a little bit longer, and we gave our full forward line a lot of bad ball in there, but they stuck at it, kept going and the one or two turnovers paid off for us.”

In terms of legacy however, he was keenly aware of the importance of the win for the club.

“Look at Offaly hurling the last few years, the best teams in it have been ourselves, Birr, Kilcormac-Killoughey and Coolderry. Now we’ve managed to beat all of them in the county final. There’s been a lot of questions asked about this team over the years, and today we’ve answered them all and we can be recognised for the good team that we are. There was huge motivation there for us to try and put these questions to bed.”

And so to the next big question, that of the Leinster championship. St. Rynagh’s may have won four out of the last six county titles, but they’ve yet to win a game outside of the county in that time. Now, breaking that run becomes the focus.

“Leinster’s a massive thing, we’ve got either Ballyhale or Mount Leinster Rangers. Two Leinster winners, Ballyhale have won multiple All-Irelands and Mount Leinster have played in one, so savage tradition and savage teams. But we’re going to give the best account of ourselves we possibly can, we’re going to take it very seriously, prepare for it as well as we can. Every one of these lads here, they can choose to play in the Offaly championship again next year and beyond, they might never get the chance to play in Leinster; so we’re going to chase it,” he concluded.

Offaly SHC final reaction: “All I could do was watch in slow motion” - Stephen Quirke