Offaly SHC final reaction: “All I could do was watch in slow motion” - Stephen Quirke 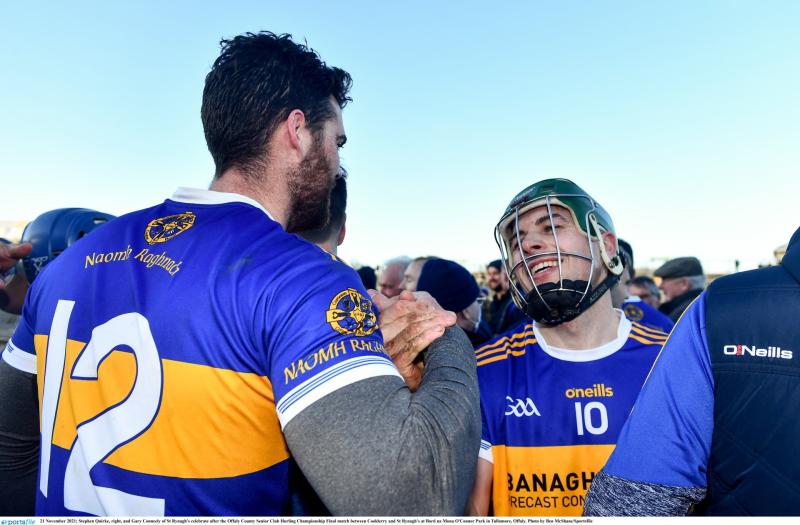 It was the moment every player dreams of. Last minute of a county final, the entire championship hinging on this attack, and the sliothar bounces up invitingly. Some players would dream of being the one there to swing the hurl and to take responsibility for the winning or losing of the championship. Others would pray that such a moment never falls their way.

Stephen Quirke is somewhere in between those two views, but in the end it didn’t matter as his late strike crept over the goal-line and ensured that St. Rynagh’s collected their 20th Offaly SHC title on Sunday.

“Anyone, give it to anyone! Once it goes in it doesn’t matter, but of course it’s nice if it’s you who gets to finish it,” was how he answered the question of whether or not he wanted to be the man to win or lose the game for his club.

He highlighted the point he struck a few minutes previously as a crucial score, both for the club and in terms of making him feel better about his contribution to the cause.

“You get that chance, just to settle it a bit, and then Paul (Quirke) got the next one and then the crowd starts to rally and get a bit louder. You look at the clock and it’s at 59 and you know there’s a little bit of time left, and once there’s any bit of time in hurling, there’s enough time. It happened to us back against Coolderry the last time and look, you just keep going and sometimes it’ll run for you.”

“The ball just seemed to pop up in front of me, and I just pulled. Then all I could do was watch in slow motion, it had just about enough to get over the line. I don’t know was it blocked on the way, but once it got there, that was all that mattered.”

“It’s a final, you’re never going to have it all your own way,” he continued.

“Coolderry are a good team, they were going to come into it strong and have their spell on top, that’s the way it goes. A lot of us have been here for a good few finals now so experience counts for a lot, you can’t afford to panic. There is always time, there was even time for Coolderry at the end, I thought it would never end!”

But it did, and as it happened, Stephen Quirke was the knight in shining armour, coming through to save the day.