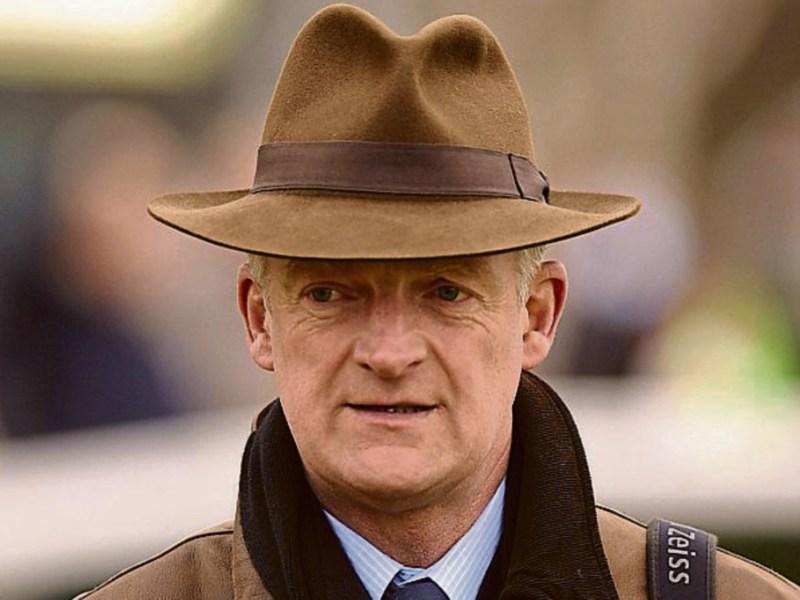 Yorkhill, who was an impressive winner of the JLT Novices' Chase at last week's Cheltenham Festival, could put his unbeaten record over fences on the line in the Grade 1 Ryanair Gold Cup Novice Chase at Fairyhouse on Sunday, April 16, as his name features among a stellar cast of 24 who are entered for the Easter Sunday showpiece.

The chestnut son of Presenting began his chasing career at Fairyhouse in mid-December when winning by 14 lengths and is now as short as 6-1 to win the 2018 Cheltenham Gold Cup after getting the better of Top Notch and Disko at Cheltenham. This would be Willie Mullins' first ever success in the race.

Sponsor Michael O'Leary's sole success in the race arrived in 2007 courtesy of the Charlie Swan-trained One Cool Cookie but Gigginstown's familiar maroon and white silks are sure to be well represented this year. Road To Respect was one of the most impressive winners at the Cheltenham Festival as he stormed to a six-length success in the Brown Advisory & Merriebelle Stable Plate Handicap Chase under Bryan Cooper. Only Cause Of Causes won by a bigger margin over the four days.

Like Road To Respect, Disko is also trained by Noel Meade and he enhanced his reputation by finishing a highly-respectable third to Yorkhill in the aforementioned JLT Novices' Chase. He is already a Grade 1 winner having landed the Flogas Novice Chase at Leopardstown on Irish Gold Cup day in February.

With €59,000 up for grabs to the winner, this could have a big bearing on the Irish trainers' championship and Ball D'Arc is one of three possibles for the current pacesetter, Gordon Elliott. He has some top-notch course form to his name having won the competitive Bar One Racing Dan Moore Memorial Handicap Chase at Fairyhouse in January. Recent Navan scorer A Toi Phil and General Principle are Elliott's other two entries.

Yorkhill and Road To Respect are not the only Cheltenham Festival winners who could show up as Alan Fleming has entered Tully East, a comfortable winner of the Close Brothers Novices' Handicap Chase under a typically-cool Denis O'Regan ride.

The winner's cheque went across the Irish Sea last year as Kylemore Lough landed the spoils for Kerry Lee and the British challenge could be spearheaded by Frodon this time around. Paul Nicholls' prolific five-year-old has already won six times over fences this season, his finest hour arriving in the betVictor Gold Cup at Cheltenham's Open meeting in November. Gary Moore has also entered Casse Tete, who was a 27-length winner on his latest start at Sandown. Other notable entries include the Jessica Harrington-trained Our Duke who is favourite with many firms for the BoyleSports Irish Grand National and Anibale Fly from the Tony Martin stable.

Fairyhouse manager, Peter Roe, said: “The Ryanair Gold Cup is always a top-class affair and this year's renewal is shaping up to be one of the best yet. To potentially have three Cheltenham Festival winners in the line-up is a mouth-watering prospect. Yorkhill won his chasing debut at Fairyhouse and he looked a star when scoring at Cheltenham. I'm sure Ball D'Arc, who won at Fairyhouse earlier on in the season, will have his supporters for Gordon Elliott who continues to set a scorching pace at the top of the trainers' championship. It should be a race to savour.”

The other Grade 1 on Easter Sunday is the Irish Stallion Farms EBF Mares Novice Hurdle and the standout name among the 22 entries is undoubtedly Let's Dance from the Willie Mullins stables who swooped late to land the Trull House Stud Mares' Novices' Hurdle in stunning style at Cheltenham. She is one of ten Mullins entries in the race with Airlie Beach, Augusta Kate and Asthuria others to note from the champion trainer.

La Bague Au Roi could not live with Let's Dance at Cheltenham but was unbeaten over hurdles prior to that and could seek compensation for Warren Greatrex, while the other British raider could be Lastbutnotleast from the Donald McCain stable who showed such a willing attitude to win a Listed contest at Doncaster last time.

Shattered Love was unable to land a blow in the Neptune Novices' Hurdle at Cheltenham but she won a Grade 3 contest by 13 lengths on her last visit to Fairyhouse in February.

“Let's Dance produced a brilliant performance to win at Cheltenham and her presence at Fairyhouse, should she show up, would be a real treat for racegoers,” said Fairyhouse manager Peter Roe.