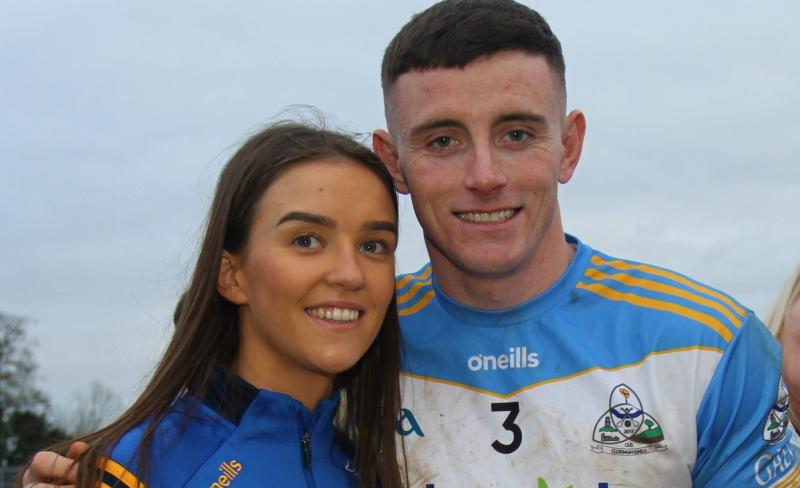 Clodiagh Gaels full back Dylan Hyland with his girlfriend Aishling Jones after they won the SHC "B" a few weeks ago. Dylan is a permission player from Raheen.

CLODIAGH Gaels are considering not entering a football team in 2022. While football has went well in the club in recent years and they reached the Intermediate Football Championship semi-final this year, a debate is ongoing about the merits of not entering next year – and instead allowing footballers from Clodiagh Gaels to play with Raheen, who will facilitate them.

Clodiagh Gaels won the Junior Football Championship in 2018 and have performed better than many expected in intermediate football since then. They went well this year, topping group 1 to reach the semi-final – they took the considerable scalp of their parish neighbours, Raheen in the first round but the roles were reversed in the semi-final where the Geashill based club ran away with a 5-17 to 1-9 win.

The Clodiagh Gaels Annual General Meeting is scheduled to be held on Tuesday evening and a discussion about the proposal not to field a football team in 2022 will take place at this. A decision will either be taken at this meeting or deferred for a couple of weeks to give members a chance to consider their options.

Clodiagh Gaels was formed a few years ago when Killeigh and Killurin amalgamated. Hurling is the number one sport in the area but there has been a strong tradition of football in Killeigh for several decades – their most famous footballer was the late Mick O'Rourke, who won All-Ireland senior football medals in 1971 and 1972, along with an All-Ireland minor in 1964.

Clodiagh Gaels are one of three clubs in Killeigh parish, along with Ballinagar and Raheen. Clodiagh Gaels are the only hurling club in the parish while Ballinagar (junior) and Raheen are exclusively football – they have the pick of permission players from Raheen and Ballinagar for hurling and a Geashill man, Dylan Hyland was a key figure at full back in the senior “B” win this year.

Raheen and Killeigh GAA Clubs were previously amalgamated as Killeigh/Raheen, fielding for a few years from the late 1980s into the end of the 1990s before they had an acrimonious split. There were four clubs in the parish for a few years after that before Clodiagh Gaels was formed after Killeigh and Killurin voted in favour at disbanding their existing clubs at Emergency General Meetings in 2015.

There has been an interesting GAA history in the parish with several different clubs coming and going over the years. At different times, Geashill and Cloneygowan had their own clubs with Geashill winning Senior Football Championship titles in 1902 and four in a row from 1904 to 1907. Killeigh won the SFC in 1915 and 1916 while a club in the Killeigh area, Quarrymount were successful in 1901. St Mary's was a renowned parish club for a number of years and they won the senior football title in 1947 and 1950 while Raheen was formed in the 1960s – the Raheen townsland is located half way between Geashill and Cloneygowan and was chosen as a compromise name.

Raheen were beaten by Edenderry in the 1985 Senior Football Championship final – they had the pick of players from Ballinagar at the time as players could play junior with their own club and with a senior team in the parish before the rules forbidding anyone playing with two clubs were enforced.

Ballinagar and Raheen held amalgamation talks a short few years ago and held EGMs on the one night – Ballinagar voted in favour of the amalgamation but it failed narrowly in Raheen, winning a clear majority of supporters but falling just short of the percentage needed to disband a club.

Since then Raheen have been up and down, surviving an intermediate relegation battle last year but reaching the final this year where they came up against an excellent and rampant Clonbullogue team.

It is far from certain that Clodiagh Gaels members will vote in favour of not entering a football team. While several influential club people and players are in favour, there will also be a groundswell of opinion in favour of keeping their football flag flying.

If they do vote in favour of it, a wider debate about unifying the whole parish will re-emerge down the road and some influential people believe this will have to happen at some stage – the parish is united at underage level as Na Fianna with both having great success at football and hurling level, winning U-16 and minor titles in both codes.

At the Offaly GAA County Board Convention on Tuesday night, chairman Michael Duignan briefly touched on the subject of amalgamations when he referred to the number of small clubs in the county and stated that some of these will have to amalgamate.

As things stand, football and hurling faces challenges in the parish. Intermediate football is the third tier in Offaly and would have been classed as junior before the Senior “B” Football Championship was introduced. Clodiagh Gaels were delighted to win the Senior “B” Hurling Championship this year but will have their work cut out to retain senior status. And they struggled to field two hurling teams this year, which is an issue considering that Killeigh and Killurin both fielded hurling teams a short few years ago while Raheen also had a hurling team at different stages over the years – Ballinagar briefly fielded a hurling team in the 1990s but it was a very short lived experiment there.

Clodiagh Gaels' second team competed in the Junior Hurling Championship this year but didn't fulfill all their fixtures, conceding a walkover in their final group game to Ballyskenach-Killavilla.

Raheen will be very happy to facilitate players from Clodiagh Gaels if they vote in favour of not fielding a football team. While they reached the Intermediate Football Championship final in 2020, they were resoundingly beaten, 3-15 to 2-8 by Clonbullogue, and there is a general acknowledgement in Raheen that they are short a few players. Should Clodiagh Gaels go down this road, the Offaly GAA County Board will, however, have to examine the situation as you would have the beaten intermediate finalists and semi-finalists pooling their resources together – the board would have to decide whether they should be allowed compete at intermediate or forced up to senoior “B” but the likelihood is they would be allowed to play at the lower grade.

Cliodiagh Gaels have a few footballers who would make a big difference to Raheen – Clint Horan was on the Offaly senior football panel for a while and Shane Dolan has played minor football for Offaly.

Ironically, the Clodiagh Gaels AGM on Tuesday takes place in Geashill as the hall in Killeigh is not currently available.