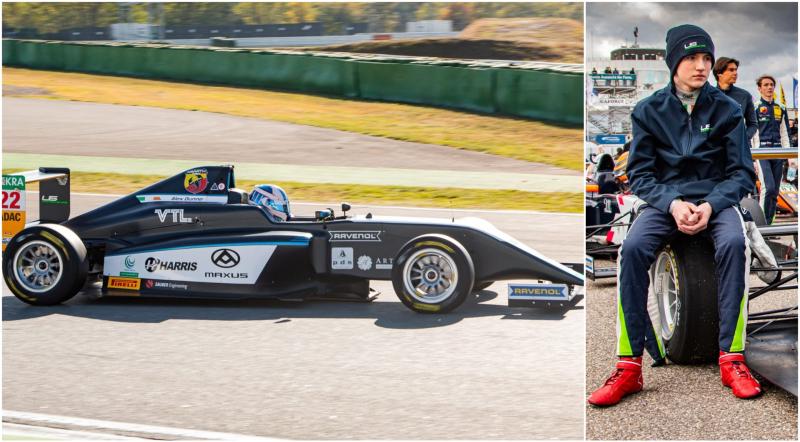 The fifteen-year-old topped both qualifying sessions before picking up two Rookie class wins on his way to fourth place in races two and three.

Returning to the Hockenheim track for a second visit, Alex went into the weekend full of confidence, having battled his way to two second place finishes on the same circuit back in September. A clutch problem in Friday’s wet opening practice session limited the Offaly teenager's track time, leaving him seventh fastest at the end of the session. With the clutch replaced the Harris Group and Maxus backed driver was back on form in session two to end up third quickest overall, well clear of his nearest Rookie class rival.

Qualifying for races one and two took place in quick succession on Friday afternoon and right from the start the young Clonbullogue driver was amongst the quickest. With five minutes left in session one, Alex moved to the top of the time sheets and his time was quick enough to remain there until the chequered flag.

By securing pole for race one Dunne became the first rookie in the series to take a front row start. Following a five minute break, the cars were back on track for session two and once again it was Dunne who emerged from the pack to top the time sheets and take an incredible double pole position.

The Irish driver was back on track for race one on Saturday, but an issue with his new clutch saw him make a slow getaway leaving him down in sixth place. After a long safety car period Dunne was getting back up to speed when one of his rivals, while attempting to overtake, ran wide and knocked Alex’s front wing off leading to him crashing out.

Starting from pole again in race two on Sunday, the clutch issues continued and this time the rookie found himself down in seventh place by the end of lap one. Having worked his way back to fourth, Alex was able to match the pace of the leaders as he consolidated another Rookie class win and fourth place overall.

Starting fifth for Sunday’s race three, another problematic start put Dunne down to ninth place but once again he was able to battle back through the field. Having made it up to fourth by the end of lap three he was once again as quick as the drivers ahead of him but was unable to close the gap as he finished off his weekend with another Rookie win and fourth place.

Speaking after this second weekend in the German series Alex said: “I’m really happy with the progress I’m making and speed I’ve shown. Taking two pole positions is a really good achievement, especially as I am a rookie up against much more experienced drivers. I was a bit disappointed with races one and two, but I know that we’ll get the starting issues sorted and I’ll be back even stronger at the next event at the Nurburgring. I have to be happy with two Rookie wins and I’m very grateful to all of my backers, Harris Group, Maxus, VTL, Reynolds Logistics, Artisan Marble, PDS Associates, Xpress Health and Motorsport Ireland whose support has made this possible”.

Alex Dunne will make his final appearance of the year when the German Formula 4 championship reaches its climax at the Nurburgring, from November 5-7.

Decision due this week on proposed housing development in Offaly