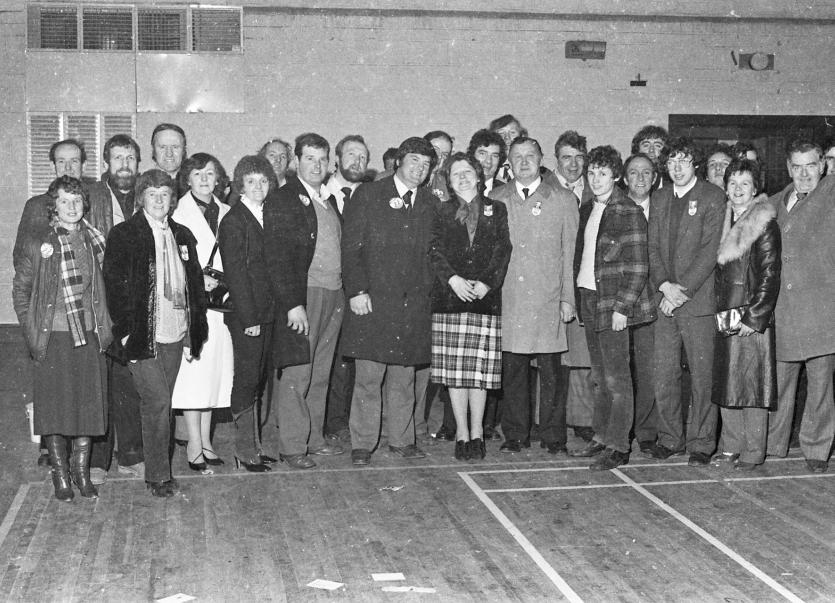 Party members pictured at an election county in the early 1980s. Included in pic is the late Ber Cowen and a young Brian Cowen

Fianna Fáil marked its 95th anniversary on Sunday, May 19 last with a well attended online zoom event of ordinary members from the constituency and public representatives.

Founded on May 16 1926 Fianna Fáil is the second oldest Irish political party in existence second only to the Labour Party and has been the country's most successful electoral party of Government being in power for 63 of the past 95 years of its existence.

“Its impact in the region has been enormous and has been characterised by economic development and investment in the promotion of local education and natural resources,” said Eileen O'Connell, PRO of Offaly Ogra Fianna Fail.

Several of the party's elected representatives have served in some of the highest offices in the land including the late Paddy Lalor, Liam Hyland, John Moloney and most notably Brian Cowen who served as Taoiseach from 2008-2011.

Panellists recalled people like Lar Brady of Lalor's Mills who headed the old IRA during the revolutionary period and who went on to serve as Chair of Laois Fianna Fáil, Paddy Fleming Granduncle of Seán Fleming TD and commander of the IRA unit that fired the first shots of 1916 Rising outside Clonad, Portlaoise and Patrick Boland - combatant in the No. 2 Ballycumber Offaly Brigade of the IRA who went on to serve as the party's first TD in Laois Offaly in 1927.

While contributors expressed pride in the educational and economic achievements of the party in the region with one contributing anecdotally that "De Valera and Lemass put men and machines on bogs where you wouldn't have put an ass and cart!".

Anger too was expressed in the tackling of the country's housing crisis with many expressing the desire to return the party to its more radical roots in the face of slow progress in tackling the nation's most pressing crisis.

One elected contributor expressed that as a party Fianna Fáil must build communities and not just houses for everyone based on the ability to pay, including the middle classes who have been forgotten in the conversation.

A heritage test case: The War Memorial in Tullamore

Offaly councillor asks - Is the canal suitable for swimming?