A heritage test case: The War Memorial in Tullamore 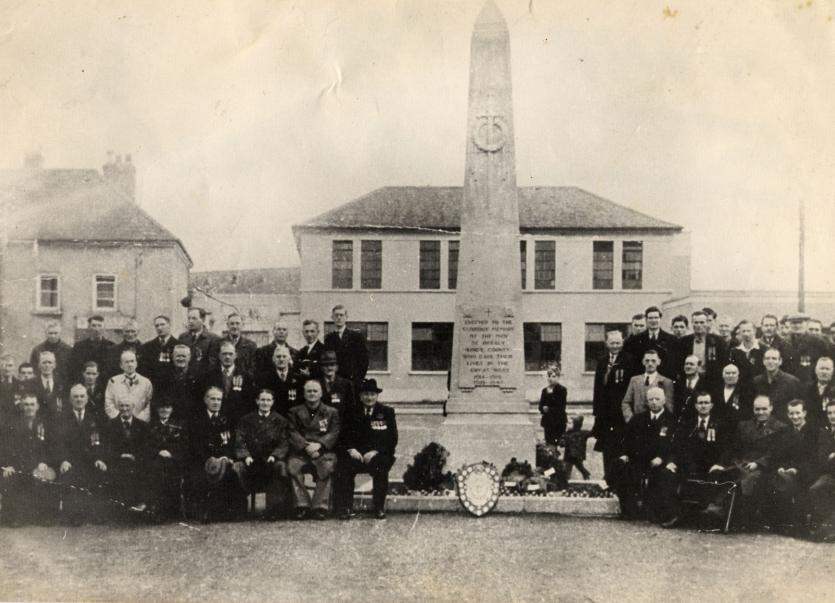 Veterans at a Remembrance Day ceremony in Tullamore in the early 1950s. Pic: Offaly History

The War Memorial stands in the centre of O’Connor Square- the principal public space of Tullamore and which contains its largest assemblage of fine buildings.

A marketplace from the early 18th century, by the 1960s the Square had become the central  car park of the town. In the 1980s a generous paved area was created around the Memorial, but over the years the Council filled it with it with signage, parking meters, electrical units, rubbish bins, planting boxes, bollards, lamp posts, seats and bicycle stands.

In 1998 a new Town Plan drawn up by the County Engineer Willie Wall, the Senior Executive Planner Vincent Hussey and the Town Engineer Patsy Rouse made the imaginative proposal to pedestrianise the northern side of the Square and link it to Church Street by opening the private bridge at the rear of the then VEC premises.

With monies from Ireland’s EU Structural and Investment Funds, in 2016 the Council embarked on the Street Enhancement Scheme whose principal feature would be the improvement of the Square. To start the process, the views of the public were sought on four possible options which ranged from full to partial pedestrianisation. Ninety seven submissions were received in response. Just as with the debate around the part pedestrianisation of Emmet Square in Birr in the previous year, many wanted all the parking retained, while others were in favour of part or full pedestrianisation. None however, sought the removal of the War Memorial.

Erected in 1926 by a local committee led by the Town Council and with the participation of British Legion members, the Memorial, which today is in the ownership of Offaly County Council, was designed by the architect E.W. Doyle Jones and carved from local Ballyduff limestone. In common with many memorials commemorating the dead of the War of Independence and the Great War, it comprises an elegant obelisk surrounded by a raised stone kerb with a gravelled space between for commemorative wreath-laying and to define its curtilage.

It is registered as a Protected Structure of Regional Importance in both the Tullamore Town Plan and the National Inventory of Architectural Heritage. Thus, no alterations can take place (if at all) unless justified by detailed public notices, descriptive images and historical assessments.

As a small child, my grandfather once brought me to it on Remembrance Day to attend a ceremony to honour the Offaly men who had perished in the Great War, amongst whom was his eldest son Tommy Holohan, killed in Gallipoli in July 1915 and I still remember the sadness and solemnity of the occasion. The elegant design of the Memorial has stayed with me from that day and I believe that its dignity and original design are worthy of preservation.

The Council used its powers under Part 8 of the Planning Act to carry out the Street Enhancement Scheme. The overall design was well conceived and would remove overhead wires and provide stone pavements along with smart modern street furniture and lighting.

But instead of taking the opportunity to reinstate the dignity and setting of the Memorial which had stood in the Square for almost one hundred years and despite any public call for its removal, the Council planners decided to move it, and as to some of the proposals such as moving the memorial to the town park apparently not advising their intention to do so by omitting any reference to this in public notices and providing none of the essential accompanying documentation.

When this was discovered, objections poured in from the Department of Culture, Heritage and the Gaeltacht, An Taisce, the Offaly and Birr Historical Societies, the Birr Georgian Society and many individuals including Tommy McKeigue and the Earl of Rosse. The Offaly County Councillors, who had the final say, responded by directing that the Memorial be kept and the proposed pedestrian crossing to the Old Post Office, relocated elsewhere.

The Department noted the Councillors decision with approval but observed that :
‘Nevertheless, the revised site layout showing the proposed amendment merits comment on architectural heritage grounds. It positions the Memorial off-centre in an expanded island between car parking bays directly north of the pedestrian crossing. This proximity might result in mechanical damage to the Memorial, as it is not protected by railings, from impact by pedestrians using wheeled items for example such as bikes, baby buggies or wheeled shopping trolleys. The proposed arrangement could also create a potential hazard to mobility-impaired users of the crossing.

The Department recommends that the finished detailed design should create an appropriate setting for the War Memorial at this location as well as facilitate the safety of pedestrians negotiating the street.’

Ordinary people have to obey our planning laws which are enforced by local authorities. But when carrying out their own work, those authorities have extraordinary powers under Part 8 of the Planning Act.

Part 8 is a useful procedure for the swift execution of uncontentious works, for building small housing schemes or for progressing projects which have been already fully described, discussed and authorised through the democratic development plan process. But to exercise these powers, a local authority must be completely transparent and demonstrably even handed - especially where Protected Structures are involved. Restrictive laws, regulations and guidelines govern even the most minor alterations.

As a former President of the Irish Planning Institute I firmly believe that public authorities should operate to the same standards and practices that they demand of ordinary citizens. I have put it to the Council that in this particular case they haven’t. The Council’s response is that it can carry out its own works on its own property as it wishes and that anyway the previous setting was a cluttered mess and the raised kerb would constitute a ‘trip hazard’.

Now, I have little doubt that if there was a Protected Structure in a private car park and its owner sought planning permission to remove part of it in order to get in a few more spaces, the Council would swiftly issue a strongly worded refusal. If he or she went ahead and removed it anyway, fines of up to €12.7 million and/or two years in prison could be the ultimate cost. That is why I have asked An Bord Pleanala to review the status of the Council’s own works in this case.

Should An Bord decide that the works had no real sanction, I believe they should be reinstated in order to preserve the dignity and setting of the Memorial and the Council’s own moral authority. If, on the other hand,it deems the works to be exempt, I will accept its decision, but with regret and some surprise.

Over the next twenty years the Government will pursue its strategy of ‘Town Centres First’ which is at the core of the National Plan-’Project 2040’. Funding will be lavished on our towns and villages to revitalise them and improve their public spaces. Local authorities will hope to access matching European Union Regeneration Funds, as Offaly did for the Street Enhancement Scheme.

But all over Europe and particularly in Ireland, there are unfortunately memorials to the dead of so many conflicts. Treating them with disrespect is certainly not in harmony with EU policies, especially those on civic regeneration and architectural heritage and may well place our national or local commitment to urban conservation in doubt.

The Tullamore Street Enhancement Scheme has been a success and is a credit to Offaly County Council who deserve congratulations. Despite the initial wariness, the pedestrianisation of the northern side of the Square has won public approval and is now the showpiece of the town. The new attractive face it shows to visitors is marred only by the mutilated Memorial.

Relocating the pedestrian crossing as the Councillors directed and the Department anticipated, and incorporating a parking space or two on either side of the Memorial into the pedestrianised area as well as unearthing and reinstating its raised kerb, would restore its dignity and former curtilage. It wouldn’t need a new procedure as it would simply be putting things back as they were before.

We should now consider which is the more precious-our architectural heritage or a parking space for our car. 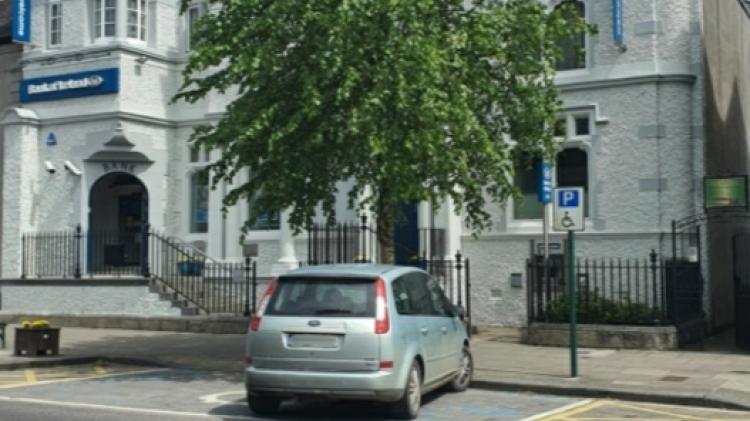 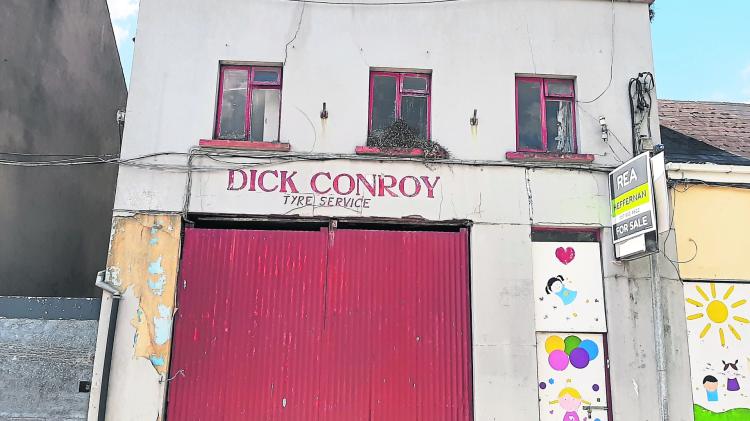 Do you want to win a house? Amazing prize in draw to fund new community centre in Offaly

Do you want to win a house? Amazing prize in draw to fund new community centre in Offaly