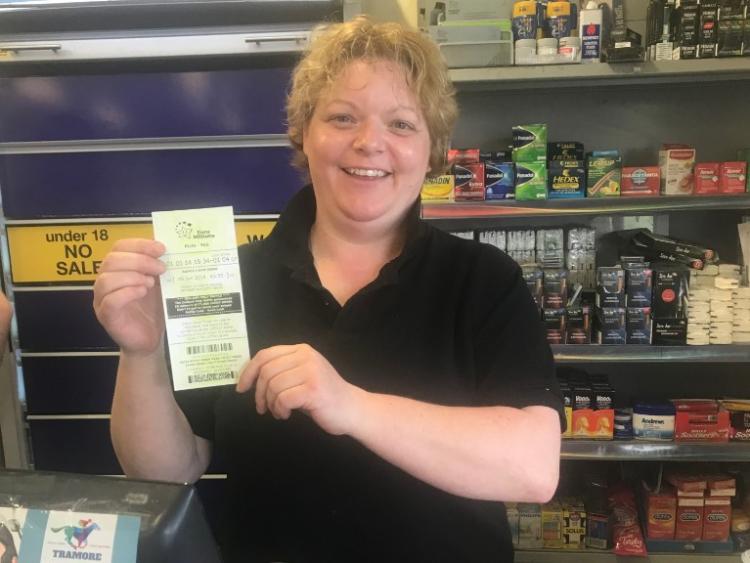 Tramore Service Station store owner and manager, Elaine Farrell who is spreading the word to her customers to encourage them to check their tickets to see if they are Ireland's newest millionaire

Someone in Waterford has got their June Bank Holiday weekend off to a sizzling start after winning a cool €1 million on last night’s EuroMillions Draw  ‘Ireland Only Raffle’ on Friday. And in a double dose of Bank Holiday luck a Mayo player also scooped €500,000 on last night’s Daily Million Plus draw.

READ NEXT: Luckiest town in Offaly to buy a lottery ticket

The National Lottery is now urging all Waterford EuroMillions players to check their tickets to see if they have won this life-changing sum.

The golden ticket for the EuroMillions guaranteed €1 million prize in Ireland was sold at the Tramore Service Station on the Waterford Road. The ‘Ireland Only Raffle’ winning code, found on the EuroMillions ticket, is I-DTG-57033.

This winning shop is less than 10 kilometres away from where another Waterford player scored a €1 million win in the November 2017 ‘Ireland Only Raffle’. That ticket was sold at the Supervalu store in the Kilbarry Centre in Tramore.

A delighted Tramore Service Station store owner and manager, Elaine Farrell said today: “We’re absolutely delighted. We are just a few minutes from where the other recent Ireland Only Raffle winning ticket was sold so maybe Tramore is fast-becoming a lucky millionaires town. We’ve been spreading the word to all of our customers this morning and I really hope it is a local who is the winner.”

The winning did not end there as a lucky Daily Millions Plus player in Co. Mayo won the top prize of €500,000 on last night’s draw.

The National Lottery is also calling on all players in Castlebar to check their tickets to see if they are the winner.

National Lottery CEO, Dermot Griffin said today: “We are thrilled that we have made this Bank Holiday weekend one that two of our players will never forget! And here’s hoping for a treble as tonight’s Lotto Draw is worth an estimated €4.5 million. Even if our players are away for the weekend or out and about they can still play in store, online or through the National Lottery App before 7:30pm this evening.”

He added: “And we urge our players not to forget that every day there are two chances to become a millionaire through our Daily Millions draws and the two Daily Millions Plus Draws with a €500,000 prize.”