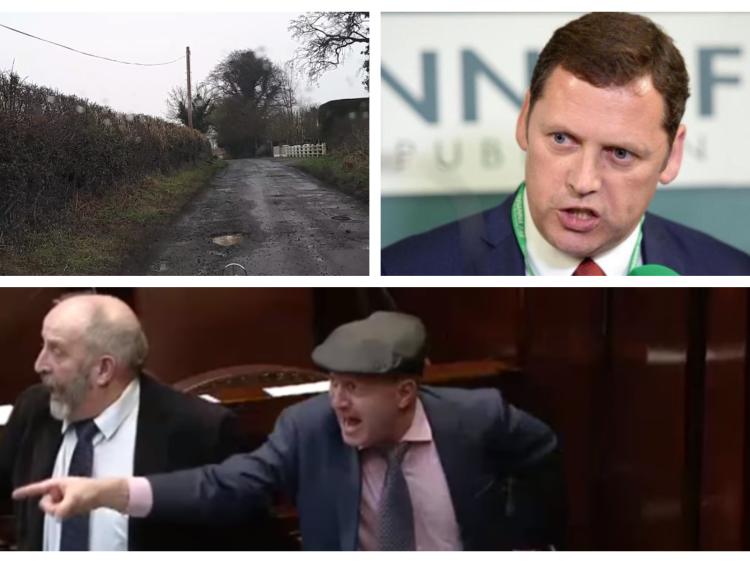 OPINION: Rural issues no joke despite dismissal by Dublin media

Offaly TD Barry Cowen was a guest on RTE Radio One's Late Debate programme on Tuesday night where the condition of rural roads appeared to be given short quarters as the panel discussed the issue. He made a point that if you want the regions outside Dublin to "compete on a level playing field, the least they need is basic infrastructure."

He mentioned the road network in his own constituency, to which one of the participants laughed and joked, "good plug there." Barry explained that commitments he received from Minister Shane Ross before Christmas had not been followed through in the Capital Investment Plan where €7.7 million was allocated to Offaly's roads, 40% of which are built on bog and last around 15 years less than other surfaces.

Host Sarah McInerney suggested that the government has given a commitment that 80% of road investment will be allocated outside Dublin, continuing, "so there's not a whole lot to complain about there, is there?"

SEE ALSO: REVEALED: Offaly has some of the worst roads in the country

Fellow panelist and Irish Independent columnist Colette Browne then said, "I think we've heard it all before - rural TDs giving out about roads. It's not exactly re-inventing the wheel, is it?"

"We've had the same thing constantly in this country. We never seem to learn. We get plans, strategic plans - where are we going for the next 25 years, and it will all come down to potholes on roads in various parts of the country," she added.

"50% of all economic activity happens in Dublin - we need to sort this out. The National Planning Framework was a good plan and there's a danger now it's going to be torn apart by all of these competing local interests with me, me, me, what about my area," Browne stated.

The 'good plug joke' and the perceived dismissal of TDs highlighting road surfaces seemed to condense it down to a 'nothing new here,' just another parish pump issue dragged up to save a politician's seat. It smacked of an attitude which regularly lampoons the so-called 'gombeen' rural politician who seemingly has nothing more important to talk about than a few potholes.

What media folk in Dublin don't understand is that this infrastructure is one of the biggest barriers to rural development. To ignore TDs shouting about how big the potholes are in their areas is to dismiss the undoubted disparity between Dublin and the rest of the country. Why has the IDA visited Offaly so infrequently in the last two years? Why is the rural economy and the small Irish town dying?

It's due to that very fact; the lack of infrastructure, be that roads or broadband, or the public bus route that may be put out to tender and eventually disappear. The links that drive people to live and work in an area are being eroded away in rural Ireland, counties just like Offaly.

Figures suggest that the IDA has made just six visits to Offaly in the last two and a half years. Over 500 have been made around Dublin in the same period. IDA investment fails to materialise with just over €1 million filtering through to Offaly in the last four years. Commercial rates are crippling local economies, something pointed out by numerous business people in the county recently.

The latest GeoDirectory figures show that 15% of Offaly's commercial properties are vacant, and that Edenderry has the second highest vacancy rate in Ireland. 27% of commercial properties are empty in the North Offaly town. 65% of the empty properties in Offaly have been vacant for three years or more, showing the 'recovery' mooted on Kildare Street hasn't spread much further than the Red Cow roundabout.

GeoDirectory stated: "Despite evidence of progress, the report highlights a continued imbalance between Dublin and the rest of the country, as commercial vacancy rates remain stubbornly high outside the capital." The counties with the worst vacancy rates are all rural, the likes of Leitrim, Sligo, Mayo, Longford and ourselves in Offaly to name a few.

It's easy to dismiss the likes of the Healy-Raes who staunchly defend their mostly rural constituency in Kerry, and so often they've been labelled clowns, the sort of backward backwater politician that is the subject of outlandish caricatures and satirical grandstanding in the Sunday papers.

The Healy-Raes are actually fitting into an electoral system that demands they focus on local issues. Our voting system requires local people to elect local candidates, and when processed through the most basic mechanism of human psychology, that boils down to the reality that people's priorities are those closest to home.

Whether that's a sea wall in Clontarf, or a pothole-ladden road in Offaly, people start to care less about things the further away from them they are. Perhaps that explains the dismissive sentiments of Dublin media-types toward potholes in Offaly or any other rural area and their grievances.

We don't have a national list for electing politicians to solely tackle big national issues; we have the locals elected on the back of promises to fight the corner of the parish. That's how proportional representation works, whether the big political hitters like it or not. A change to that would require a major overhaul of our current voting system, but that's a another day's work.

Perhaps these political debate hosts and commentators play Devil's Advocate and try to draw out the likes of Barry Cowen as they cast him in the role of 'the typical politician' out to fix a few roads and keep his arse in a Dáil seat. That's possible, but it doesn't hide the Dublin-focused mentality that prevails in the media as well as the Cabinet, filtering all the way down to industry and policy.

The net result of that is a town like Edenderry with close to 40 unoccupied business units on their main street, sinking roads in Shannonbridge and Birr, and the entire of the rural population of Ireland shouting into the abyss, getting nowhere.