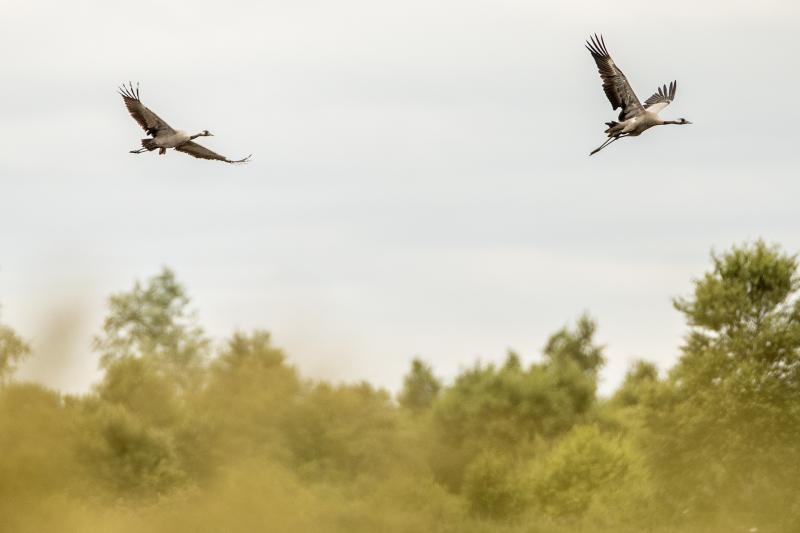 BORD na Móna has announced that a pair of Common Cranes have returned to a Bord na Móna rewetted peatland and successfully hatched two chicks several weeks ago. This follows a previous successful breeding attempt in 2021.

There is also great excitement among the Bord na Móna Ecology Team with the appearance of another Crane using several other Bord na Móna sites. Some of these peatlands have been rewetted through the Peatlands Climate Action Scheme (PCAS) last year. The team believe that this third young adult bird may have been a chick from the original pair of cranes, or an Irish-bred bird.

The discovery and return of cranes nesting on two Bord na Móna peatlands is of great significance as this species has not bred in Ireland for 300 years, was thought extinct, but now may return as a breeding species. The precise location of the cranes is being kept confidential in order to protect and conserve the birds and avoid disturbance.

Mark McCorry, Lead Ecologist at Bord na Móna said, “It is very exciting to see the birds returning to Bord na Móna rewetted peatlands and it is particularly significant that these are some of the first cranes born here in centuries. The appearance of a Crane using sites that were re-wetted last year is a real indication that we are creating the right conditions for these birds and for lots of other biodiversity. Getting to see this bird slowly flying low over the new wetlands has been a highlight for me this year.”

Bord na Móna's peatland rehabilitation scheme is the most extensive of its kind ever undertaken in Europe. Rehabilitation commenced on 18 peatlands in 2021 and works on another 19 are commencing in 2022. During the first year of the rehabilitation programme, Bord na Móna undertook the rewetting of some 8,000 hectares of peatland.

The restoration and rehabilitation of peatlands is creating rich and diverse habitats for our native plant and animal species. Examples of the impact of this work on biodiversity includes Ireland’s only protected insect, the Marsh Fritillary butterfly, colonising Bord na Móna cutaway bogs and it is now found in numerous sites; colonies of water-dependent species such as dragonflies and damselflies establishing in newly created wetlands and the appearance of the Great-White Egret and Common Crane. Sphagnum moss, a key species of peatlands, is starting to reappear on some sites that were re-wetted several years ago.

“The Department of Environment, Climate and Communications has approved ongoing grant funding up to €108 million to Bord na Mona in relation to the enhanced rehabilitation of its peatlands under the Peatlands Climate Action Scheme. This funding is provided by the European Union’s Recovery and Resilience Facility as part of Ireland’s National Recovery and Resilience Plan. Thanks to this funding, we are hopeful that these majestic birds will continue to breed and thrive in Ireland and that we will continue to see enhanced biodiversity.

In the coming years we would like to see more birds colonising from Europe and Britain to establish a viable population here. There has also been a significant positive response from other birds such as the black-headed gull, lapwing and the common redshank. These are all species that are under pressure in the wider landscape, and by rewetting peatlands Bord na Móna is providing them with new wet habitats”, said Mark McCorry.

If you would like to visit some cutaway peatlands then Lough Boora Discovery Park is a great place to visit. At the moment there is a sea of bog cotton in bloom and numerous orchids such as the Bee Orchid will be in flower over the next month.

The Crane In Irish History

The Crane is deeply connected to the culture and history of Ireland. They have been central to folklore tales such as Fionn Mac Cumhaill, the druids, St Colmcille, and the Book of Kells. Their Gaelic name, corr, can be founded in hundreds of place names, such as the Curragh in Kildare which means ‘crane meadow’.

They were even kept as pets, and records show they were the third most popular pet in medieval times. Unfortunately, they were also a popular food item for people at the time, and their ease of capture by foxes and the draining of wetlands resulted in their demise some time between 1600-1700.