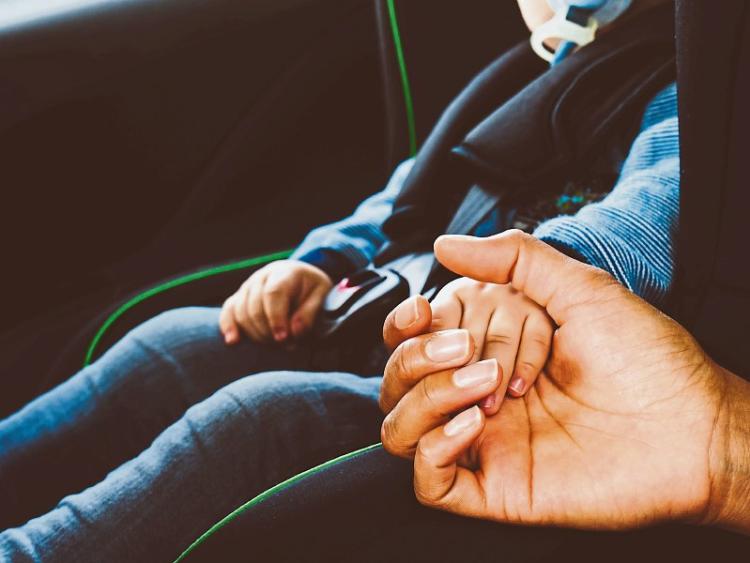 My head was totally mithered when Aidan, my oldest, kept escaping from his car seat a while back. My heart was in my mouth everytime he offended.

After the cot antics, he upped the ante and big time.

When I started this column I feared that I would struggle to have something to write about. However, I now have no doubt that my two, particularly Aidan, will provide me with plenty of inspiration every week.

My first born has never had any issue with travelling in the car. In fact he’s quite good but boredom gets the better of him sometimes.

Our very own little Harry Houdini first figured out how to free his arms from the five point harness on his car seat and was having great craic with the electric windows. I just used to stop the vehicle and put his arms back in and sternly instructed him not to do it again (while he laughed in my face!). Well, I might as well have been talking to the wall because he did it over and over and over again.

Daddy Chambers then got on the research trail and found a yoke called a ‘Houdini Stop’ and we invested. The Houdini Stop is a chest strap designed to stop a child from taking their arms out of a harness. It’s a clip that attaches to the existing harness straps to hold them closer together and thus prevents the child from wriggling out. Problem solved. The child was confused but restrained. For a while at least.

Lo and behold a couple of weeks later himself figured out how to open the new piece of gear and he was back to opening the window, or ‘winyo’ as he calls it, yet again. He had my heart broke.

We then did something we probably shouldn’t have but desperate times call for desperate measures. Daddy Chambers got a metal carabiner clip, twisted the straps a few times before putting the clip over them. In case you’re wondering what a metal carabiner clip is, it’s a metal loop with a spring loaded opening used to quickly connect things. Every house has one of them but I never needed to know the name for it until then. Thanks Google!

Anyway, it finally and properly solved our issue and instead of stopping every five minutes on car journeys, we were able to make it to far flung destinations such as Galway, to visit Nanny and Gaga Chambers, without incident.

It was all going way too smoothly. His escapism cranked up a notch, or two or even three though!

So, one evening I collected him and Sarah from their childminder, who only lives a single kilometre from our house. I loaded the two of them up and wasn’t paying much attention to them in the back of the car.

Seconds after starting the short journey home I got the fright of my life. There was the bold Aidan, proud as punch, standing beside me in the passenger seat, greeting me with a big ‘hello Mammy’ and a cheeky grin!

I let such a startled roar out of me that his lip began to quiver and out came the tears and Sarah followed suit in the back with the fright.

The journey home might have been a very short one but under no circumstances could I not stop the car and put him back but seconds later he was out again.

I watched him this time and he was pressing on the red unlock button between his legs with serious ease. His sister thought all of this was hilarious. I didn’t however.

When Daddy Chambers arrived home we took to Google for divine inspiration and soon figured out that the answer to our problems would cost us almost €250. We had no option to buy a new car seat, one without a five point harness, one with a contraption called an impact shield instead.

An impact shield is a protective cushion that effectively operates as a child retention system and is fastened in with the car’s own seat belt. It looks terribly strange and we were convinced our escape artist would hate it. Surprisingly though he loved it and he never attempted to break free. In fact he happily goes in the seat, whereas there were often tantrums when I lifted him into the other one.

When all this was going on, Sarah was quietly observing it all from the comfort of her seat. They (whoever they are!) say girls are not nearly as mad as boys but I can see her mentally taking notes when she’s watching him. He’s the worst possible kind of role model!

I get the feeling I'll be needing impact shields and Houdini Stops on the double.

More from Ruth online here Check her on facebook and on Instatgram.