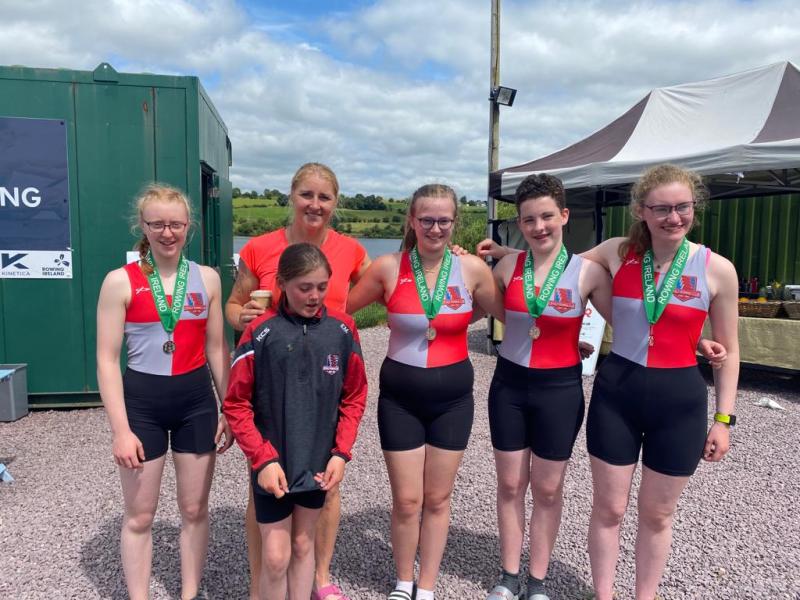 Rowing Ireland's first full All Ireland Senior Rowing Championships since 2019 were held at the National Rowing Centre in Cork over the last weekend. Conditions on the first day were almost perfect, though a slight crosswind blew up later in the day.
Offays first event was the Women's J16 coxed Quad on Friday.  Due to the number of entries, the crew of Isobel McAuliffe, Aisling Walsh, Emily Byrne, Roisin Byrne, and Cox Anna Walsh first had to qualify for the final through a time trial. This they did by posting the fastest qualifying time of 07:47  over the two-kilometre course, a pb for the crew.  In the subsequent final, they were beaten into the silver medal by Cork Boat Club, who crossed the line one second ahead of the Offaly Women.
The next event for the Offaly women was the J18 doubles, held on Saturday. Again, the crews had to qualify for the final via a time trial. The women rowed magnificently, with the crew of Aisling Walsh and Emily Byrne finishing ahead of no less than 8 crews in their first ever championships. The second Offaly pair of Isobel McAuliffe and Róisín Byrne just pipped Lee Rowing Club to secure the sixth and final qualifying spot in the J18 A final. This is the first time that Offaly has qualified for an A final since 2009. The duo came in fifth, which was an outstanding result, as they were racing crews two years older (and stronger).
Due to the forecasted weather conditions for Sunday, the organising committee decided to bring the qualifying time trials for the J16 single event forward to Saturday evening. The Offaly women, after their hard morning racing, took to the water again to fight it out for six places in Sunday's J16 single scull final. First up was Emily Byrne,  who has another year racing at this age category, and is a rower to watch. Aisling Walsh was delighted with her performance, a pb on this stretch of water. Róisín Byrne led from the start of her heat and despite the clear water between her and the field had the tactical intelligence to up her stroke rate in the last 500m, and posted an outstanding time to qualify in second place for Sunday morning's final.  The heat, and the exertions of the morning took their toll on Offaly's final entrant, with Isobel McAuliffe who just missed out on a place in the final.
Sunday morning dawned bright and clear, and Róisín Byrne was on the water for 8am for the J16 single final. The Offaly woman finished her race very strongly to finish second behind a very strong Graiguenamanagh woman in a closely fought race.  Roisin was delighted to claim her second medal of the Championships

The club is looking forward to a well-deserved break from competition over the next couple of weeks, their next outing will be to the Carrick-on-Shannon regatta on July 31st.
Offaly Rowing Club offers a trial membership for those interested in trying the sport of rowing- both juniors and adults. Contact the club on Facebook, or email the secretary at secretary.offalyrowingclub@gmail.com for details.