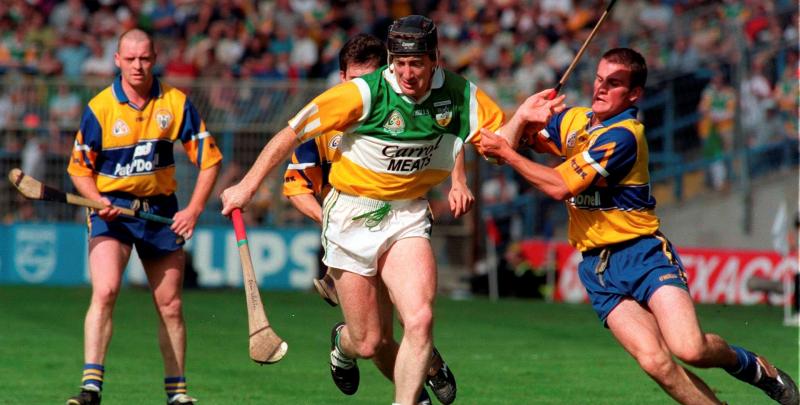 The GAA Minor Moments podcast guest this week is the Team of the Millennium pick and Offaly hurling legend Brian Whelahan.

Brian’s hurling career can be defined by his rivalry with Clare, from captaining Offaly to his second All-Ireland Minor Hurling title against Clare in 1989 to the five legendary games against Clare and Clarecastle in 1998. An era considered the golden age of hurling.

Brian talks about the recent Clare V Limerick match and how it is a throw back to the direct hurling of the 90’s that both counties played and why the fans love to see that type of hurling.

Brian gives his views on many topics that will be of interest to hurling fans including the modern game espoused by Limerick and how he thinks the teams of the 90s would fare against the modern teams.

He tells us why he believes games should never go to penalties and why he disagrees with the rules around under 20’s not being able to play senior.

He goes into depth about the famous year of 1998 and how Offaly arrived late for the 2nd game of the trilogy and how it nearly derailed the team.

He talks about the influence of managers' throughout his career especially his father Pad Joe who uniquely managed him at minor, under 21 and team in 1989.

Brian talks about growing up in Birr, where everything revolved around hurling and how a culture of winning from school and club, including Feile, forged teams for the ages.

Brian disagrees with Under 20’s not being able to play senior calling it "absolute nonsense” and Whelahan believes that such a rule "shouldn't be in our game".

"I don't think they have an idea what they're talking about," Whelahan said of the GAA rule. “If they think a player is being protected by not allowing them play U-20 and playing senior then they are grossly mistaken.

"They're training anyway, you can be sure they are playing games so it's not as if they are being rested in any format.

"And for the GAA to bring in a rule that prohibits a player playing in their last year at any underage grade, because they are good enough to play senior is in my opinion very detrimental to the development of that player because it is his one opportunity.

"For the GAA to make a rule that you can't play because you're playing senior, that's not right and it shouldn't be in our game."

"Not all of those players on an U-20 team go on to play senior and it prohibits them from getting that U-20 medal, that could be the height of their inter-county career. It's wrong, it's wrong," he stressed.

For more information on the GAA Minor Moments podcast, brought to you by Electric Ireland, and the episode with Jamesie O’Connor giving his perspective of that famous 1989 All Ireland Minor Final game go to https://www.electricireland.ie/gaa-minor-championships#podcast