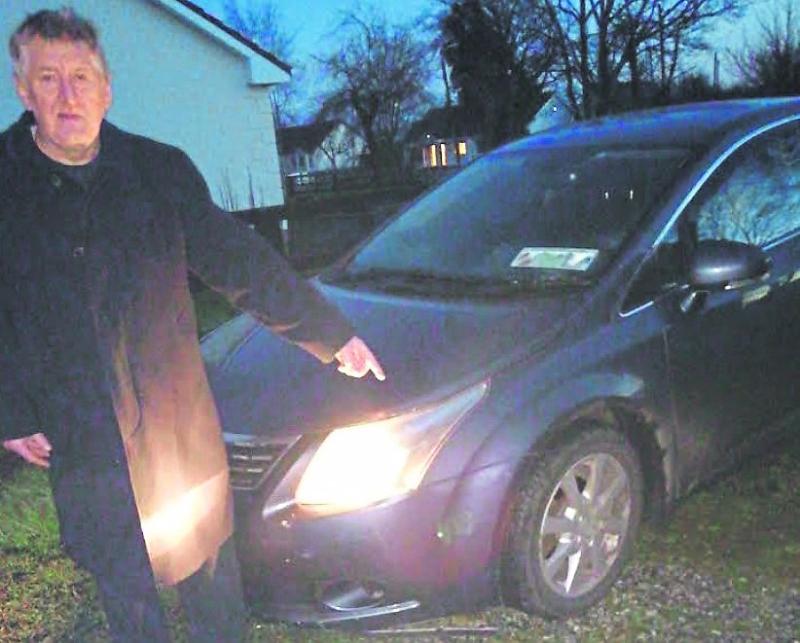 An Offaly man whose car suffered thousands of Euros of damage is alerting people through local media about a fox hazard on the Cloghan / Blueball road.

Pius Luby said he had been in Clonmacnoise with his wife Ita “saying a few prayers” on Sunday January 2 last, and they were driving back home when the accident happened.

“We were near the two wind turbines in Boora when I saw a sudden movement. It was a fox, coming at speed. It hit the front left of my car. The impact was a sickening, terrible noise.

“I drove on and didn't inspect the car until I got home. Considerable damage had been done to my front bumper and left light.

“The next day I went back to the fox. It was a massive fox, maybe male because of its large size, and it was dead, in a drain. I could see where it came from - through a hole in the hedge on the lefthand side of the road.”

The accident happened on the R357, Cloghan / Blueball road, near the two wind turbines located there, and a few hundred yards from the right turn to Lough Boora.

“It's very near to the new section of walkway they are currently developing which will run to the Grand Canal Way,” remarked Pius, who added that he had only been doing 45mph when the accident happened.

Pius, who is retired from his work as a credit controller with Industrial and Domestic Furniture (now Glenwood) in Tullamore, reckons the fox was following a wellworn route from its den on the left of the road, through the hedge, across the R357, and into Lough Boora (for some hunting). He reckons there are other foxes using the route and he wants to warn roadusers to exercise caution when driving in the area.

“I don't want anyone to get the bang my car got,” he said. “It's costing me €2,000 to fix the damage, which is quite a sting. The fox came at top speed and hit it a fierce bang. It caused damage to the wheel and the bumper is cracked.”