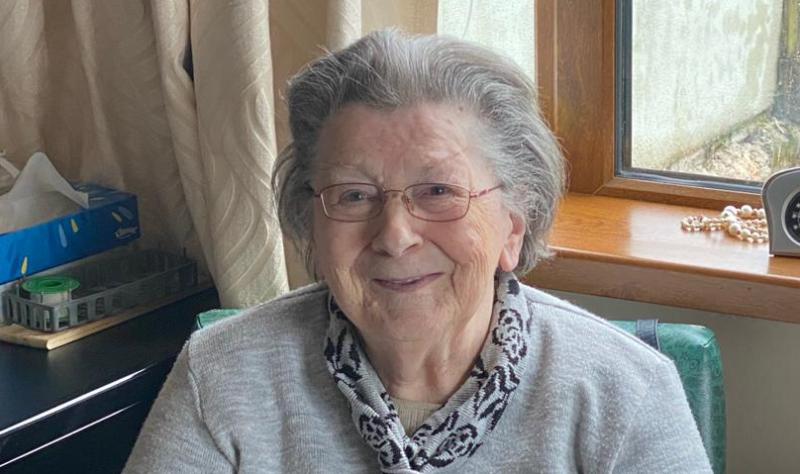 I was born in Portlaoise on the 4th of September 1932. I am the eldest of three children, my sister Lily and my brother Mattie were both born after me but unfortunately gone before me.

My father, Joseph Dunne was a butcher and done a bit of part time farming as well. My mother was a Delaney from Mountrath and worked inside the home. I went to school in the Presentation Convent in Portlaoise. The year before I did my Leaving Certificate my family moved to Tullamore. I stayed in Portlaoise with an aunt and uncle of mine to complete my Leaving Cert and then moved to Clara Road, Tullamore when I was 18.

I worked in the office with my Dad who had a butcher shop situated just off O’Connor Square, where the new post office in now. My future brother in law (Paddy Cleary) worked with us in the butchers and it was through Paddy I would have met Jack, my husband to be in 1950.

I married Jack in July 1954 in Dun Laoghaire and we went to France on our honeymoon. We visited Jack’s sister Judy who was a nun in France at the time.

When we came back from our honeymoon I moved out to Newtown, Killeigh and lived in the farm house where one of my sons and his family now live. Jack’s mother and brother, Joe lived in the house as well at the time. Jack was a beef farmer then. It was not long after this that Jack and I took over the running of a shop on the Clara Road in Tullamore from Mrs Delaney (where Dolan’s shop is now situated). I worked in the shop for a couple of years until we sold it.

Myself and Jack were blessed with 14 children; John, Teresa, Geraldine, Michael, Kathleen, Kevin, Vincent, Brendan, Brian, Evelyn, Aidan, Bernadette, Gerard and Mark. Thirteen out of the 14 of them were born in the farmhouse. We built a new house beside the farmhouse where my son Mark and his family live now and he was born there. Life was busy for me rearing and looking after the family and thank God they were all healthy and well able to look after each other. Dinner time would be a hectic time with up to 20 mouths to feed; the workmen and older members of the family (1pm) and the younger ones when they came home from school. Particular times of the year would have been busier when silage had to be cut etc, when there would be another five or six workers to feed.

Jack ventured into dairy farming during the 70’s and built a milking parlour. He was milking up to 200 cows per day and milk was collected by the local creamery lorry. This continued until the late 70’s and Jack explored the option of adding value to the milk that was produced on the farm rather than selling it straight to the creamery. Both of us explored and researched the setting up of our own creamery to pasteurise and pack milk from our farm. We built a milk processing factory in Newtown (Tullamore Dairies) which supplied bottles of milk and cartons in the Offaly area.

Jack was heading into his 60’s and I wasn’t too far behind but still we continued to invest in the business and in the mid 80’s we decided to research other opportunities available to us so that we could provide employment for our family and utilise the resources that we had.

Both Jack and I travelled the length and breadth of Europe looking at new ideas and opportunities and came back to develop a plan of building a yogurt and cheese factory. Glenisk (who name came from the Irish word – glean uisce – the stream flowing through the woods – which is a small woodland located on the family farm) was built. We started to make yogurt and cheesecakes where we sold locally first and then we were fortunate to get listings with the supermarkets where we began to sell nationwide. Life was tough! In addition to rearing a family and managing a farm, Jack and I were now running both Tullamore Dairies and Glenisk. All the tasks of getting a business going had to be learned and we had no manual or no internet to fall back on. We had to learn the hard way – from canvassing customers, producing quality products, dealing with the accounts and everything in between that needed to be completed. With the help of our family, we all put our shoulders to the wheel and got them up and going.

Both Jack and I were attending the Leinster Final of 1995 between Offaly and Kilkenny which some of you might recall this match as there was a heavy downpour of rain just before the match. About 10 minutes into the excitement of the game, Jack collapsed beside me with a heart attack. Luckily, we were surrounded by first responders in Croke Park and he was rushed to the nearby Mater hospital. He spent three weeks there and then came home but sadly took another turn and passed away. Jack’s passing left a massive void.

My family continued to manage and run the business after that. I am proud that my family has continued with Jack’s legacy of developing and growing the businesses where it is now moving into the 3rd generation.

The community of Killeigh was always important to us and to our family as a whole down through the years. We got to know many of the families in the community, either through the business or the different organisations. When I had time on my hands in my later years, I got involved in the Parish Council and we are so fortunate to have priests like Fr John Stapleton and Mgsnr Tom Coonan who always supported the families when needed and I admired how they look to the future and go with the times we live in. In these testing times of course I am like many others, miss going to daily Mass and the bit of a chat afterwards, but thanks to modern technology and facebook in which one of my sons set up for me I now get daily Mass in the comfort of my armchair.

In Killeigh parish there are many clubs and organisations still going strong for all ages and it’s great to see the next Cleary generation playing their part in some way. The long standing Tullamore Show, the soccer club, local GAA club and of course the development of the community centre to name a few. Growing up now in Killeigh a child has many options and hobbies they can enjoy and be involved in. I always enjoyed going to the old folks party over the last few years in the hotel in Tullamore, but wouldn’t it be great to have it in the new community centre when it’s developed.

Today, I enjoy the simple pleasures in life and reflect with fond memories of the life that I have lived and the people that I have shared my journey with. My 14 children are all grown up now and they have their own families (35 grandchildren) and 11 great grandchildren but thankfully many of them still live near me”

If you would like to learn more about the development of the proposed Killeigh Community Centre and how you may be able to assist please visit our website www.killeighcommunitycentre.com