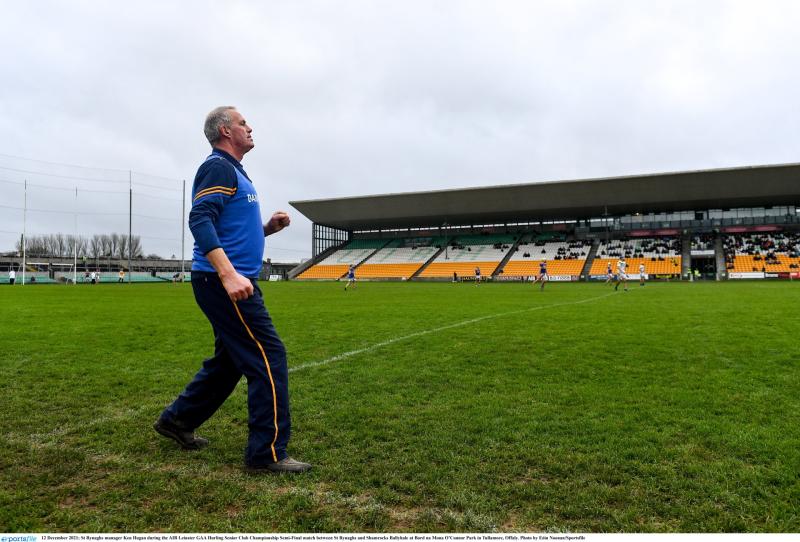 KEN Hogan has ended his very successful term as St Rynagh's senior hurling manager to return to his home club in Tipperary.

Lorrha were bitterly disappointed to be relegated from the Tipp Senior “B” Hurling Championship, the Seamus O'Riain Cup in 2022, and Hogan explained that he felt duty bound to take on the job there once he was asked byhis own club.

“The savage loves his native shores,” Hogan quipped this week. “It was a big wrench to leave St Rynagh's but duty calls,” he added.

St Rynagh's shouldn't have much difficulty in attracting a top quality manager. They have been a serious force of nature in Offaly hurling in the past few years, almost unbeatable on their day. They ended a long twenty three year famine when capturing the Sean Robbins Cup in 2016 and Hogan was the man in charge as they won three in a row from 2019 to 2021.

They almost took the prize scalp of All-Ireland and Leinster club champions Ballyhale Shamrocks in the Leinster club semi-final in December. St Rynagh's performed brilliantly that day and were only denied a famous victory by a goal deep in injury time. Ballyhale went on to win well in extra time and St Rynagh's were left to reflect on what might have been when the Kilkenny power house had an easy win over Clough-Ballacolla of Laois in the final.

An excellent goalkeeper, Ken Hogan won two All-Ireland senior hurling medals with Tipperary in 1988 and 1991, five Munster and one National Hurling League medal along with an All-Star. He has been a phenomenally successful club manager since then. He was still starring for Tipperary when he guided Birr to the Senior Hurling Championship in 1991 – it was their first win in twenty years and was the start of a golden era for the club. He managed Coolderry to back to back titles in 2010 and 2011 and also led Borris Kilcotton in Laois and Wolfe Tones in Clare to Senior Hurling Championship titles.

While from just across the county boundary in Lorrha and a devoted Tipperary man, he has always displayed great respect and passion for Offaly hurling and considered taking the county job on a couple of occasions – he went to secondary school in Birr in the 1970s. On one occasion, he almost took it, going about putting together a backroom team but had second thoughts after getting a number of refusals from former players and hurling activists in the county.

Hogan stated that he wouldn't have left St Rynagh's only for Lorrha coming calling. “I feel there is a lot of potential there to achieve more and I would have been delighted to stay but Lorrha were relegated to intermediate and they really want to get back up. The decision was made to go back home but only for that I would have been delighted to be involved with Rynagh's. St Rynagh's are a great club. I had a good innings there. It was down to the players themselves. They are a great bunch of players and they showed great respect to me.”

He explained the pull to Lorrha, remarking that he has been involved all his life as a player there and then as a manager of camogie, underage and their senior hurling side. “My first loyalty is to my own club. I have been coming and going the whole time there. I am delighted to be involved again and I am looking forward to the challenge. Blood is thicker than water.”

Hogan was playing when Lorrha were previously relegated to intermediate in 1998 and he played his last game in 2007 when they went back up to senior. “It is tough to get back up but there is a good bunch of young fellows there. They had a lot of injuries last year and it didn't work out. Hopefully they will be as strong as they possibly can be.”

He talked about St Rynagh's near miss against Ballyhale Shamrocks. “ It would have been a huge boost to Offaly hurling to win that. They are very conscious that they are representing Offaly. The doubts would always have been there in them but they now know they can compete at the top level.

“The first goal was a disaster for us. Pat Camon tore his hamstring and the goal was conceded off that. We moved Simon Og Lyons back and it was a tremendous performance. It was just a break of the ball that denied us and that can happen against the likes of Ballyhale Shamrocks. We benefitted from that against Coolderry (in the Offaly final). It was a great performance and the lads are now aware they can compete at this level and are as good as anyone in the country.

“I always believed that and I still believe it. It was the same with Coolderry and Birr. Offaly teams can be as good as anyone. St Rynagh's are a great bunch and I had a great time there.”