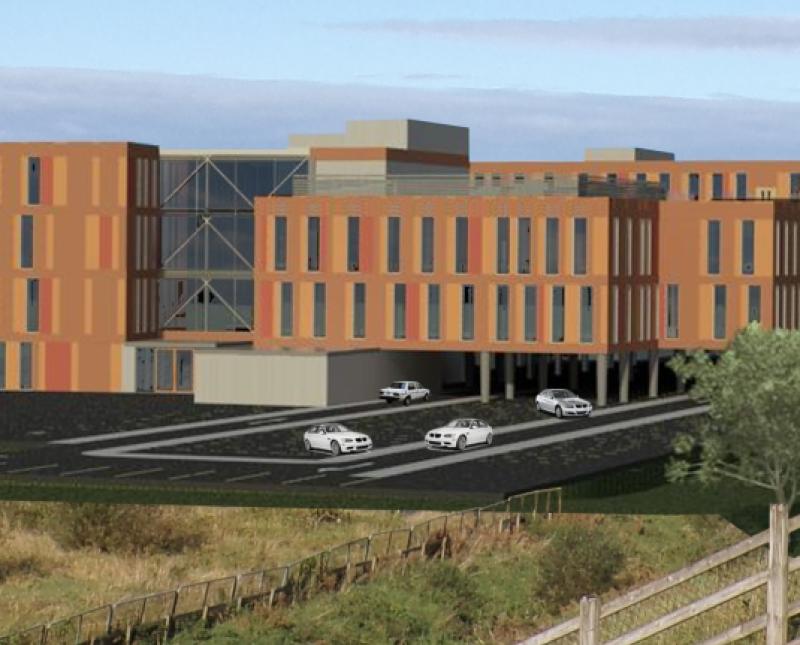 An architect's impression of the planned nursing home, rehabilitation and step down facility planned for Tullamore

Offaly County Council's finances have been dealt a blow as a developer has successfully appealed a large development contribution on a major project in the county.

Offaly County Council granted planning permission in July for the €36 million project on the outskirts of Tullamore.

John Flanagan Developments was granted permission for a 244 bedroom nursing home/rehabilitation and step down facility just off the Tullamore N52 by-pass. Planning permission had previously been granted for a large private hospital on the site but while construction began, it did not proceed due to the economic crash in 2008.

However while planning permission for the new development was granted, an appeal was lodged with an Bord Pleanala over a development contribution to Offaly County Council of €225,738.

In its appeal, John Flanagan Developments pointed out that a development contribution of over €500,000 had already been paid for the planned hospital that was not completed and described the contribution now being sought by Offaly County Council as 'onerous' and said the local authority had not taken this previous payment into account when coming to its decision.

Local people 'terrified to use motorway' through Offaly in poor weather

In his report, the An Bord Pleanala Inspector stated, "I consider that the development contributions as set out by the Planning Authority and as included within condition number 17 under planning Authority reference number 20/503 should be removed. I consider that the financial contributions as proposed are not warranted or justified in accordance with the OCC DCS 2021-2025 and should be removed. In view of the foregoing, I can conclude that the terms of the Offaly County Council Development Scheme have not been properly applied in this case and that the appeal should be upheld."

In its direction to Offaly County Council, An Bord Pleanala stated that Condition 17 of the granting of planning permission for the project, which pertained to the development contribution, should be removed.

You can read the full Inspector's Report by clicking here