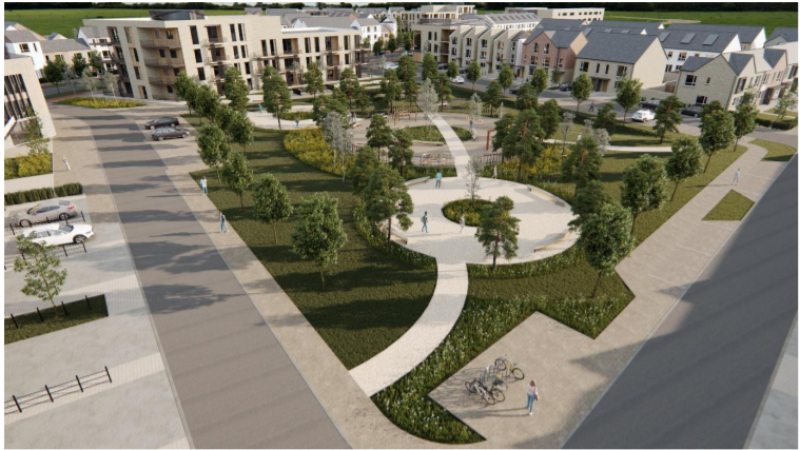 ‘’A town outside the town’’ ''ludicrous'' ‘’a joke,’’ these were some of the comments by councllors at this week’s Tullamore Municipal District meeting, describing a proposal for a massive residential  scheme on the outskirts of Tullamore.

Steinfort Investments Fund are seeking to construct 349 dwellings ranging in height from one to four storeys consisting of: 153 apartments, 5 detached houses, 143 terraced houses, and 48 semi-detached houses.

In addition, the proposal includes a  three storey neighbourhood building of 1274 sq metres which would provide three local shops at ground level with the first and second floor proposed as a business hub.

A three-storey neighbourhood building of 1733sq metres would allow for four shops and a medical centre at ground level. The medical centre extends to the first floor and the second floor would be  a gym.

A crèche with a capacity for 100 children is also proposed as a three storey independent building. 695 car parking spaces are planned.

Vehicular access will be solely from the Clonminch Road via a new traffic controlled junction.  A cycle lane will be installed along Clonminch Road.

Steinfort Investments Fund has been able to apply directly to An Bord Pleanala bypassing the council using the strategic housing development legislation for large developments.

This is the second attempt by the company to get permission, an earlier application in 2020 was refused by An Bord Pleanala.

Councillors were scathing in their assessment of both the developers and the development.

They said it goes against the current county development plan and that particular area of Clonminch  is zoned ‘’strategic reserve.’’

Cathaoirleach of Tullamore Municipal District, Councillor Tony McCormack said: "I can’t see how An Bord Pleanala would be able to give this permission considering all of the obstacles that are there with regard to our development plan, but also the submissions that were made in the past by the local residents and they will be made again. They don’t want it out there. They feel it’s too big. It's like building a small town on the edge of the town, and it’s something that we don't want.’’

Cllr Sean O’Brien: "I think this is a joke of an application, I think the developers are just chancing their arm, they decided to lodge this application on October 21, knowing our new county development plan came into force on October 22.They're really turning up their nose at us. They want to get it through, then sell it off. They don't give a damn what will happen on the site when they have their money.

"There is no logic to it, it’s not consistent and it’s not good development. It takes no account of the infrastructure particularly sewerage and water, they want to redesign Clonminch Road, which is absolutely crazy, who do they they they area? Are they a council within the council? I think they really have a neck. I hope that word goes to An Bord Pleanala that we totally reject this application. It's a pure joke."

Councillor Ken Smollen: "I can’t understand why we are even discussing this. The new county development plan has been adopted, this area is zoned as strategic reserve, it’s not zoned for housing. I would have concerns that if this goes ahead, cuckoo funds will come in and buy up a lot of these houses to rent them out for major profit. This is a profiteering developer. This new town will be of no benefit to the economy of the Tullamore.’’

Councillor Neil Feighery: "It looks like a metropolis. It’s hard to imagine that development on the location proposed, at the edge of a very mature residential estate in Clonminch Wood. It’s stark to see it. It doesn’t stand up to any sort of common sense. To see apartments in a suburban location; it’s just not suitable. Crucially it doesn't take account of the new county development plan that we spent months and months working on. I certainly think it’s not appropriate in  scale or design it’s layout is quite crude looking and I wouldn't like to see it getting approval by An Bord Pleanala.’’

Councillor Frank Moran: "We spent months and months in preparation to adopt the new county development plan. We have very few reserved functions as councillors and this is like a kick in the face for us again. I see Irish Water made a comment with regards to the application. Irish Water would want to start doing what they are supposed to be doing and upgrading the network in different respective areas. Typical Irish Water. This is zoned strategic reserve, it's not zoned new residential. I think it’s ludicrous."

Councillor Declan Harvey: "As Cathaoirleach of Offaly County Council, we spent months trying to get the county development plan through and we fought long and hard to get the core retail extended. If this goes through, are we opening up the floodgates for everyone else to have a go at it? We are always talking about people shopping outside of town, now we are going to build a town outside our town. 349 houses. It’s madness.’’

Councillor Danny Owens: "I want to say that I totally reject this and I support all my colleagues who have spoken already. What is being planned is no longer consistent with the current development plan in terms of zoning. The applicant will say they applied under the old plans. I hope that An Bord Pleanala will take cognisance that the current zoning has changed compared with what it was in the old plan. Scale, access to the site, distance from Tullamore centre, there are a whole lot of reasons why this is a bad plan, I want to support everyone who has already said that we reject that firmly." 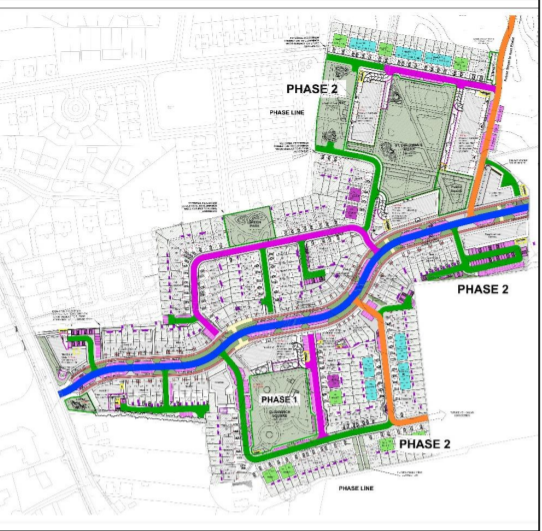